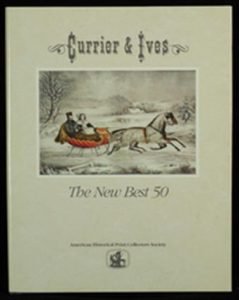 The selection of the Currier & Ives “Best Fifty” prints by a small group of collectors in the early 1930s was wildly popular in its own time. The lists have also maintained a continuing influence—so much so that it led the American Historical Print Collectors Society to take a “second look.” In 1989, AHPCS sponsored a project asking how this later generation would rank Currier & Ives prints. The purpose was not to revise or replace the original list. It was to provide a comparison by which to explore new trends in collecting interests—and to celebrate the most prolific printmaker in United States history.

The 1930s lists had been selected by less than a dozen collectors; AHPCS wanted the updated version to include many more voices. The new project had several phases:

The results were presented in an exhibit at the Milwaukee Art Museum in 1990 and in Currier & Ives: The New Best 50, published by AHPCS in 1991.

The top five of the new “Best 50″ large folio: 1. The Road – Winter, 2. Midnight Race on the Mississippi, 3. Husking, 4. Across the Continent / “Westward the Course of Empire Takes its Way,” 5. Winter in the Country / Getting Ice

In Currier & Ives: The New Best 50, AHPCS board member Christopher Lane compared the old and new lists and cautioned, “It is clearly implicit in the New Best 50 project that the lists are treated as representing the ‘best’ Currier & Ives prints in a relative rather than absolute sense. These prints are to be considered the ‘best’ prints as judged by 1990 standards, that is relative to our age, with its own taste and culture.”

Thirty-one large folios and nineteen small folios from the original lists made the 1990 Best Fifty. Comparing the two sets of lists, steamship, railroad, and scenic prints (particularly winter scenes) had gained in popularity over the nearly 60-year span, while historical scenes, clipper ship, and horse prints were less popular.

Comparing the Original and New Top 5

Between the two sets, Lane concluded that “the most sweeping trend that can be noted seems to be the current preference for romantic and peaceful generic images of an idyllic nineteenth century America.”