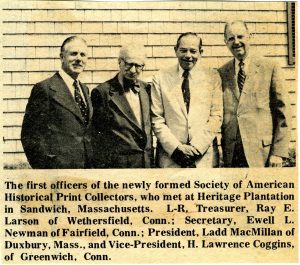 In June 1973, two Currier & Ives collectors, Ladd MacMillan and Ewell L. Newman, began working on “A Guide to Collecting Currier & Ives.” Ladd and Ewell so enjoyed the process of sharing knowledge about American prints that they decided to publish a press release in a number of antiques journals asking for interest in “Creating a circle of fellowship among those who collect and treasure these pictorial records of our early republic.”

They received over 200 responses. Ladd and Ewell invited these respondents to attend a founding meeting held June 6-7, 1975, at the Heritage Plantation in Sandwich, Massachusetts. About 80 people participated. During the meeting, provisional by-laws were created, a slate of officers elected, and the annual membership fee set at $20 per household. Those attendees who paid dues became the founding members of the American Historical Print Collectors Society. Ewell later remembered, “The long-time dream of our first President, Ladd MacMillan, and my own dream of a nation-wide fellowship of American historical print collectors now was a reality.”

Following the success of the Sandwich meeting, AHPCS leadership began planning the first official annual meeting for the next spring. On April 22-23, 1976, over 100 print collectors, dealers, and museum curators met at the Sheraton-Park Plaza Hotel in New Haven, Connecticut. The members who had joined between June 7, 1975, and April 22, 1976, became the Charter Members of AHPCS.  View a list of the AHPCS Charter Members.

Two publications were soon established: a scholarly journal, Imprint (with the first issue appearing in February 1976), and the AHPCS News Letter, which first reached members in February 1977.

In the early decades, the Society initiated programs to supplement the knowledge shared through its print publications, including hands-on workshops, regional meetings, and participation in public exhibitions. The first AHPCS-sponsored exhibition was displayed at the Morristown National Historical Park in Morristown, Jersey, in 1979 and featured prints on the life of George Washington.