Haskell & Allen’s horse prints were their most memorable productions, and the interest of this group places it next, by a number of lengths, behind the great Currier & Ives gallery of horses. The best of the Haskell & Allen trotting prints is the fine large folio of “Dexter, Ethan Allen & Mate.  Fashion Course, L.I. 1867…1872.” This print of a single horse racing a team has great spirit, and, incidentally, the details of the harness are most interesting. 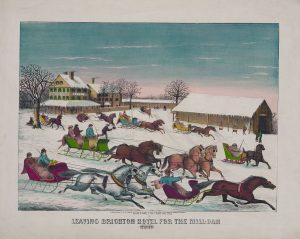 An unusually entertaining pair, showing horses, turnouts, sheds, and a roadhouse of the period, is “Leaving Brighton Hotel for the Mill-Dam,” – “Summer” and “Winter” – both designed by E.E. Howe, 1871, large. Though no other work, to my knowledge, is signed by Howe, I should be inclined to assign to him also the interesting road scene, similar to the pair just mentioned, entitled “Trotting Cracks on the Brighton Road.  (Scene, Mile Ground)  1872,” large. Another fine one, showing a team of chestnuts to a cutter, in a winter scene, is “Fearnaught Stallions. Lancet.  Fearnaught Boy…1875,” large.

The series of four large undated colored folios, “Spring,” “Summer,” “Autumn,” and “Winter,” is well known. The “Winter” is most amusing, showing oxen, a cutter, and boys with sleds. It is almost a Durrie, and is a real American winter scene and typical of the firm. Therefore I have reproduced it in colors.

Among Westerns, there is “Trading on the Plains.  The Indian in Doubt,” n.d., 12.4 x 7.13,
colored, from 14 Hanover Street, showing a trader using the Demon Run to secure what he wants from the Red Man. There are few prints of the crimes we committed like this.

“Union Pacific Rail Road…1872,” large folio, colored, was lent me by General William B. Parsons. He considers it one of best of all the Western lithographs, and I agree with him. At present it is the only copy known.
Another Western is “Midnight Race on the Mississippi.”
One of their views is “Boston Common (Beacon Street Mall looking toward Park Street),” n.d., small, a well known and interesting print.
“The Old, Old Story,” n.d. small, is an isolated comic of unusual charm, I think. The story is even older now, and just as funny.

It is apparent that their horse group, and a few notable isolated prints, such as those reproduced in this book, make the Haskell & Allen prints a group worth watching. The general level is not high, but there are certainly some very important ones. They did, it is my belief, a very large number indeed. Varying from the Kellogg group, they produced mostly folios. They must be considered well up in the list of quantity productions. So many of their prints have been reproduced here that further comment is unnecessary.

Image credit: “Leaving Brighton hotel for the mill-dam. Winter,” courtesy of the Library of Congress.