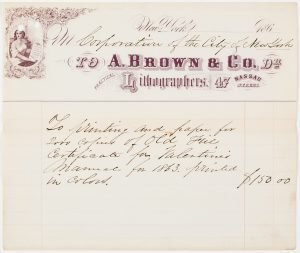 Billhead of A. Brown & Co., ca. 1862. Courtesy of the American Antiquarian Society.

Arthur Brown (1827-1895) was born in Ireland and later immigrated to the United States where he became a lithographer. Brown produced prints on his own and for a time also published as part of A. Brown & Company. Wilson’s New York City Copartnership Directory for 1862-63 identified the partners in A. Brown & Co. of 47 Nassau Street as Arthur Brown and George L. Loutrel.

Among the prints by Brown were:

O’Neil’s Plan for the Relief of Broadway, City of New York, by an Elevated Promenade and Railroad, “A. Brown, 179 Broadway,” undated, large.

A series of illustrations for T. W. Field’s Historic and Antiquarian Scenes in Brooklyn … (1868).

Portraits and views for Henry McCloskey’s Manual of the Common Council of the City of Brooklyn for 1866. 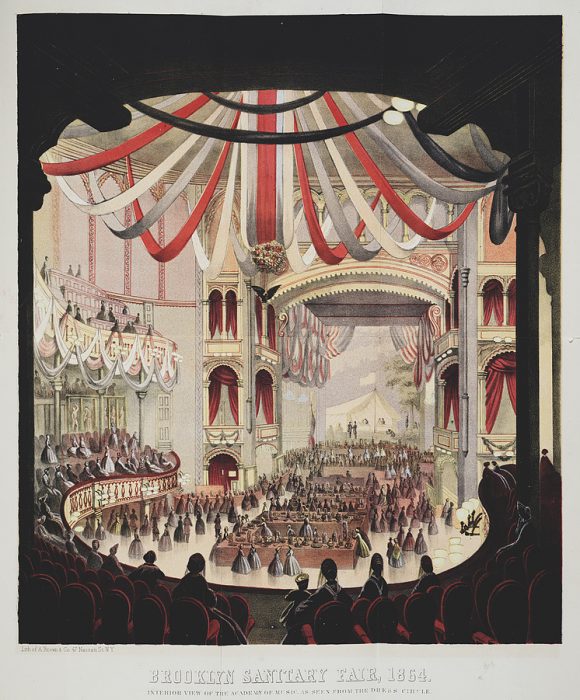 A. Brown & Co., Brooklyn Sanitary Fair, 1864. Interior View of the Academy of Music, as seen from the Dress Circle [Lithograph, 1864]. Courtesy of the Library of Congress.

A. Brown, Bushwick Town House and Church. 1800. ; Luqueer’s or Master’s Mill on Maspeth Creek. ; Howard’s Inn. 1776. From which the Guides of the Flanking Detachment of the British were Taken [Lithograph, ca. 1868]. Courtesy of the American Antiquarian Society.