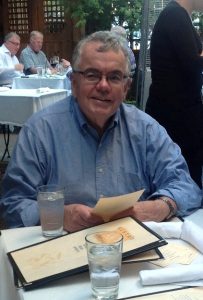 The AHPCS lost a long-time friend, board member, and enthusiastic participant with the passing of Michael McKenzie, who died on September 11, 2020, following a battle with cancer. Mike had been a member since September 2003 and rarely missed a meeting. He was passionate about Currier & Ives and other American popular print producers and eager to learn and share what he knew.

Michael was a graduate of the University of Michigan and his business career led him to Handleman Company, in the recorded music distribution business. I first met Mike about ten years ago when I convinced the director at the Clements Library that we should host an AHPCS regional meeting. Mike was about the only other member within the state of Michigan so I made sure he got a personal invitation. Mike not only came for the afternoon session but also made clear that he’d like to be involved in any other events related to prints. “I got nothing but time!” he often stated. It was easy to become friends as we had plenty of interests in common.

Mike eagerly took on the most arduous tasks related to the planning and implementation of the AHPCS 2017 annual meeting in Ann Arbor and was very proud of the resulting sessions–and especially that the ledger balanced at the end. Mike’s interests were broad and his curiosity about prints was multi-faceted, including the intricacies of the centuries-old production processes, the distribution and circulation, and the collecting market today. We never lacked for something to discuss when prints were on the table. He particularly loved Currier & Ives and gathered a wonderful collection of portraits, historic events, and genre prints. He delighted in placing them in carefully selected 19th century frames with archival backing. In recent years, he had focused on collecting chromolithograph trade cards with similar genre and Americana themes.

Michael’s generosity went beyond the extensive donations of his time. In 2019 he established the Michael McKenzie American Print Collection at the Clements Library with a donation of about 150 popular prints of the 19th century, many in beautiful and original antique frames. I have been advised that Mike’s will contains a long list of charitable organizations.

Mike liked to travel and sought out beautiful and quiet natural spaces. Perhaps his favorite — he mentioned this several times — was Death Valley. He also enjoyed the peace and serenity of Maine along with the great antiquing opportunities.

We will miss Michael’s enthusiasm and willingness to roll up his sleeves and contribute. He always found a reason to smile and laugh, even when his health was rapidly deteriorating. I hope he found some solace in knowing that his contributions to organizations like the AHPCS and the Clements will make a significant resource for the benefit and enjoyment of others.

This remembrance first appeared in the Fall 2020 issue of the AHPCS News Letter. Photo courtesy of AHPCS member Tim Bradbury.