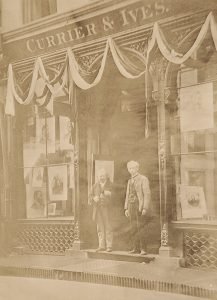 Currier & Ives was one of America’s most prolific and successful printmaking firms.  Headed by Nathaniel Currier (1813-1888) and James Merritt Ives (1824-1895), it was based in New York City. Currier & Ives chiefly produced black-and-white lithographs that were hand-colored. Lithographic prints could be reproduced quickly and purchased inexpensively, and the company called itself “the Grand Central Depot for Cheap and Popular Prints.”

“Currier & Ives” was the name used by the firm from 1857 until 1907, but the business had its beginnings in two predecessor firms involving Nathaniel Currier: Stodart & Currier (1834) and N. Currier (1835 to 1856). Currier was a printmaker and businessman; James Ives started as the firm’s bookkeeper in 1852 and five years later became Currier’s partner. Neither was an artist, so although Currier & Ives prints were published by the partners, they were drawn and lithographed by others. Artists that worked for the company included John Cameron, Louis Maurer, Otto Knirsch, Fanny Palmer, Charles Parsons, and Napoleon Sarony. Additionally, paintings by George H. Durrie and Arthur Fitzwilliam Tait were made into Currier & Ives prints.

Nathaniel Currier retired in 1880 and died in 1888 and James Ives died in 1895. The firm, under the direction of their sons Edward West Currier and Chauncey Ives, carried on until 1907. Though the name of the firm changed over time, all prints produced by this firm, even before 1857, are often referred to as “Currier & Ives prints.”

AHPCS gets more questions about Currier & Ives items than any other type of print. Our FAQ page is a great place to find answers to your questions.

AHPCS maintains a list of prints not included in the standard Currier & Ives print reference guides.

Learn the story and see the images of the Currier & Ives original and new “Best 50,”

N. Currier, Little Kate [Lithograph, circa 1851]. Courtesy of the Library of Congress.

Currier & Ives after George Durrie, Winter in the Country: A Cold Morning [Lithograph, 1864]. Courtesy of the Yale University Art Gallery.