History of the Currier & Ives Best 50

Any Currier & Ives collector who browses dealer catalogs or online auctions soon becomes familiar with references to the “Best 50” prints. More than 7,000 different prints were produced by Nathaniel Currier from 1835 to 1856 and then by Currier & Ives from 1856 to 1907. From such an enormous output, one can see why being labeled one of the fifty “best” would be noteworthy. But where did this ranking even come from? What makes certain prints the “best?” 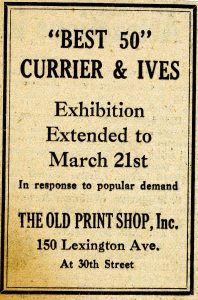 The Origins of the Best 50

In 1932, Harry Shaw Newman, owner of the Old Print Shop in New York City, and Charles Messer Stow, editor of the antiques section of the New York Sun, asked a small group of collectors to give their opinions on the fifty best “large folio” prints by Currier & Ives (and its predecessor firm, N. Currier). A large folio is 14 x 20 inches or larger. As opposed to the company’s smaller prints, which were sold for 10 to 25 cents in the 19th century, the larger prints often had price tags of $1.00 or more.

Newman and Stow didn’t craft “The Best” list imagining that it would still be relevant to collectors almost a century later. Their goals were more immediate: a display of the prints at the Old Print Shop, an exhibition catalogue, and daily installments chronicling the results in the New York Sun’s antiques section. Ten collectors and two print curators were selected as judges.

Who were the judges?

How were the printed ranked?

The judges were asked to consider the following criteria in making their selections:

The Old Print Shop archives includes the typescript and handwritten responses of each judge. 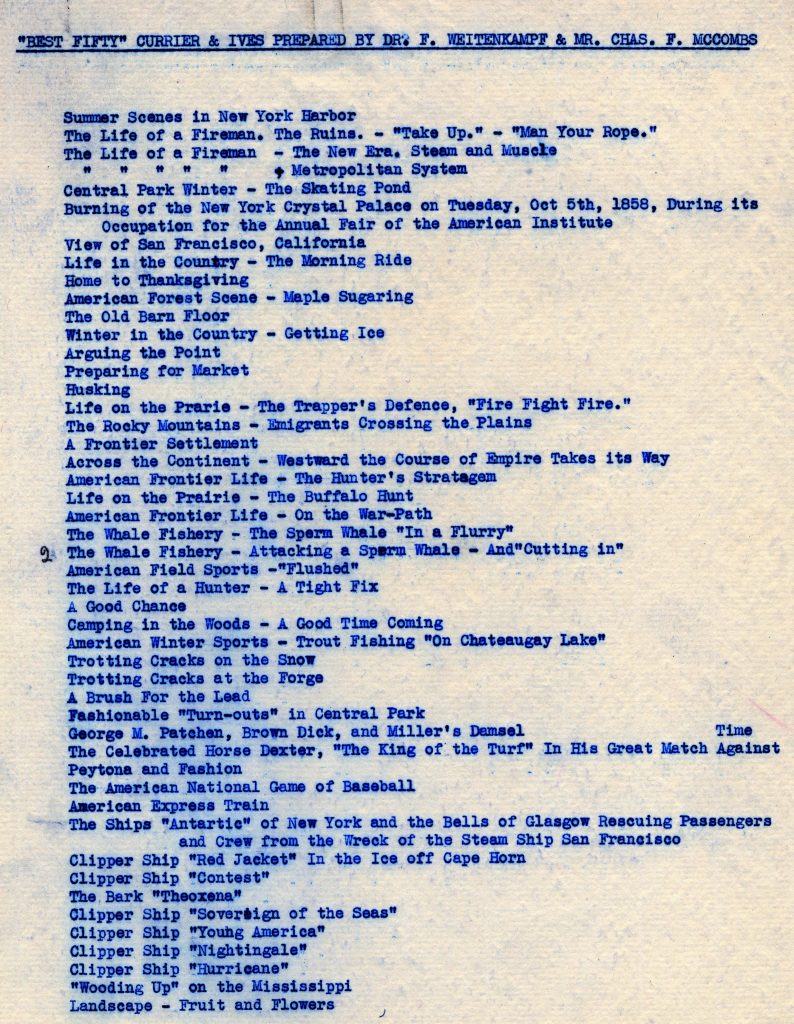 Each collector was left to determine how to apply the broad parameters. Florence Hill Waters responded that her selections were “influenced by former prices–this one must take as an indication of rarity.”  The judges did not attempt to rank their own lists–most presented their choices alphabetically by title.  David Wagstaff noted that his weren’t in any order and certainly “not as I would select them had I the opportunity to select the ones I like the best.”

In January 1933, Newman tabulated the results. 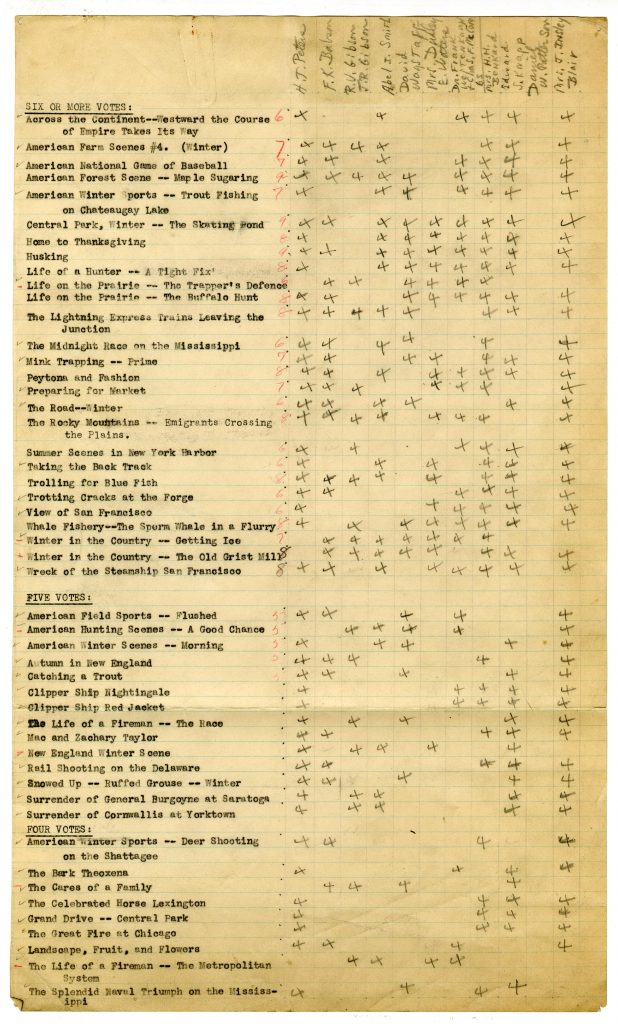 At the time, experts estimated there were about 6,700 Currier & Ives prints total, but because the judges were limited to large folio prints, they were actually only choosing from about 800 different titles. Still, that was a considerable number from which to expect much agreement. No single print appeared across all lists, and there were only three that appeared on nine lists:

Charles Messer Stow wrote in his introduction to The Best Fifty exhibition catalogue that the agreement on these three prints “is probably as near as we shall ever get to the question ‘What is the best Currier print?'” These prints became the top three and the rest of the “Best Fifty” was filled out with the prints that had appeared on four or more lists. 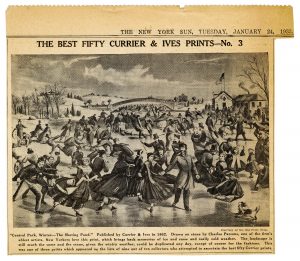 The Best 50 project had moved speedily. Newman sent out his request to the judges in December 1932, and by January 1933, the results were tabulated and an exhibit was open in the Old Print Shop gallery. The New York Sun began reproducing one print a day starting with Husking on January 21st and finishing on March 20th with No. 50, The Splendid Naval Triumph on the Mississippi.  The exhibition catalogue was published in March 1933, and, in it, Stow wrote that the newspaper’s daily reproductions, “Has been the most popular feature of this kind that The Sun has ever printed. The demand for back numbers was far beyond the supply.” 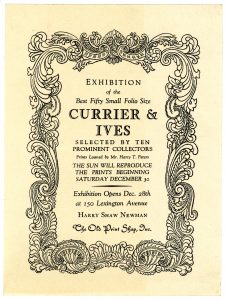 The response was so positive that Stow and Newman repeated the whole process a year later with the Best Fifty Small Folio Currier & Ives. The Sun began reproducing the prints on December 30, 1933, running them concurrently with an exhibit at the Old Print Shop.

Most of the judges were the same, minus Natalie Blair and curators Frank Weitenkampf and Charles McCombs. In their places, there were two new names: Pennsylvania collectors Asher J. Odenwelder and Col. Henry W. Shoemaker. As a boy in 1893, Shoemaker had purchased his first print directly from the Currier & Ives shop.

For the small folios, one title, The Express Train, appeared on all ten lists and became No. 1 of the Best Small Folios. No. 2, American Railroad Scene–Snowbound, received nine votes. The list was rounded out by prints that had received four or more votes.

In the article introducing the Best Small Folios, Stow explained why the prints were so important: “They constitute a record of the nineteenth century which has been preserved in no other way and records of the past of this country are too few and too precious to be neglected.”

Stow closed his article by wondering why there was no club for lithograph collectors. Forty-two years later, two Currier & Ives collectors would form such an organization (though with a slightly larger scope): the American Historical Print Collectors Society.

Fittingly, in 1991, AHPCS would again ask the question for a new generation: What are the Best 50 Currier & Ives?