The recent news that Freeman’s Auctions sold an engraved copy of the Declaration of Independence for $4.42 million reminds us that prints go beyond just pretty pictures.

Here at AHPCS, we focus on historic prints produced from a matrix, using intaglio, relief, or planographic techniques. A matrix is defined as a “physical surface that can be manipulated to hold ink.” The way the physical surface is manipulated to hold ink defines the printing processes. Common examples of intaglio, relief, and planographic prints are engravings, woodcuts, and lithographs, respectively. These techniques can be used to create much more than just pictorial content, including—as with the Declaration of Independence—texts. 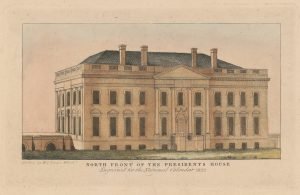 Fig. 1. W. J. Stone, North Front of the President’s House [Hand-colored etching engraved for the National Calendar, 1822]. Courtesy of the Library of Congress.

The recently sold Declaration of Independence is a copperplate engraving by William J. Stone (1798-1865) printed on parchment in 1823. The engraving was commissioned in 1820 by John Quincy Adams, then the United States Secretary of State. Stone was an engraver in Washington, D.C., and his imprint also appears on maps, charts, and book illustrations. Stone etched an image of the White House (Fig. 1) around the same time he was working on his Declaration of Independence.

A Very Brief History of the Declaration of Independence

On July 4, 1776, the Second Continental Congress voted to approve the Declaration of Independence, and Philadelphia printer John Dunlap was charged with producing the first printed version of the Declaration. This broadside, carrying only the names of Continental Congress President John Hancock and Secretary Charles Thomson, was distributed to every colony and American military leaders. On July 19th, Congress ordered an official handwritten version (known as an “engrossed” copy) of the Declaration to be made and signed by the Congressional delegates. In total, there would be 56 signers. 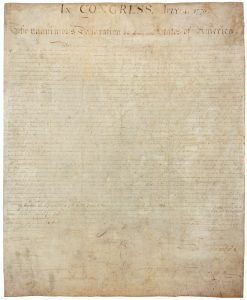 Fig. 2. Engrossed Declaration of Independence [1776]. Courtesy of the National Archives.

This handwritten, signed copy became the iconic “national treasure” that has been displayed at the National Archives in Washington since 1952 (Fig. 2). However in the decades after 1776, it was rolled up and moved multiple times—notably packed in a bag and evacuated to rural Virginia during the British invasion of Washington in 1814.

The end of the War of 1812 spurred a wave of patriotism in the United States and created new interest in the country’s origins, its founders, and founding documents. Printmakers recognized a market for patriotic prints, and in the late 1810s, two men competed to be the first to bring their own engravings of the Declaration of Independence to market. In 1818, calligraphy teacher Benjamin Owen Tyler published his copy, engraved by Peter Maverick (Fig. 3), and a year later, John Binns published his own version, complete with an ornate border containing state seals and vignette portraits of John Hancock, George Washington, and Thomas Jefferson (Fig. 4). 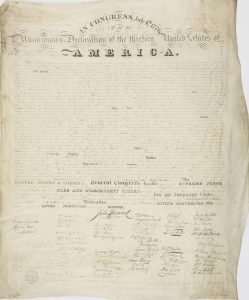 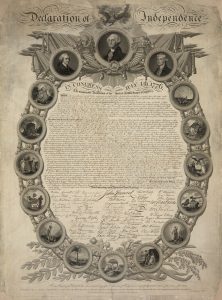 Fig. 4. Binn’s Declaration of Independence [1819]. Courtesy of the Library of Congress.

Tyler and Binns strove to provide true “facsimile” (or exact) copies of the original delegate signatures. Authenticity was a key selling point, and both went as far as to include certifications from the United States Secretary of State on the actual prints.

Secretary Adams certified Binns’ copy, writing: “I have compared all the signatures with those of the original and found them EXACT IMITATIONS.” A year earlier, Acting Secretary of State Richard Rush had attested to Tyler’s print, “I have, myself, examined the signatures to each. Those executed by Mr. Tyler are curiously exact imitations; so much so that it would be difficult if not impossible for the closest scrutiny to distinguish them, were it not for the hand of time, from the originals.”

Secretary Rush’s reference to the “hand of time” introduced a growing problem for the original Declaration—the document was deteriorating. The process of creating copies proved part of the problem. In February 1819, Adams had given Binn’s permission to handle the original to “take fac similes [sic] of the signatures.” Adams later noted, “The original itself has suffered by the handling of the Engraver to take these fac-similes.”

Aware of the vulnerability of the original, Adams proposed creating an exact copy of the entire Declaration (not just the signatures), writing that it would “be kept separate from the original, and as an accurate likeness of it, in case of any accident happening to it.” Adams noted in his diary that Tyler had a “talent of imitating very exactly the handwriting of others,” and, in April 1819, he asked him to take on the task. Tyler requested $150 for the project, which was apparently too costly. Adams reported, “I therefore gave up the project.” 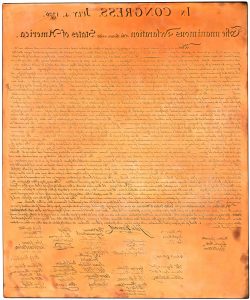 Fig. 5. Stone’s Engraving of the Declaration of Independence [Copperplate, 1823]. Courtesy of the National Archives.

According to Adams’ diary, he initially met with William Stone in July 1820 about engraving a passport for the State Department. Sometime in subsequent months, Adams commissioned him to make a copperplate engraving of the engrossed Declaration of Independence. On June 5, 1823, the Washington National Intelligencer reported that “after a labor of three years,” Stone had completed his work, and the Department of State had purchased the plate. The article noted, “We are very glad to hear this, for the original of that paper, which ought to be immortal and imperishable, by being so much handled by copyists and curious visitors, might receive serious injury.”

Along with purchasing the actual copperplate (Fig. 5), the State Department also commissioned 200 copies on vellum from Stone. In 1824, Congress passed a resolution delineating the distribution of those 200 copies including to various federal and state officials, as well as two copies each to the three still-living original signers: John Adams, Thomas Jefferson, and Charles Carroll. It is one of Carroll’s copies that sold for $4.42 million in the July auction.

A mystery that remains with Stone’s engraving is how exactly did he do it? How did he create such a near copy? And, did his process do further damage to the original?

One theory emerged that Stone might have made a copy using a wet or chemical transfer process that lifted up ink from the original. In 1880, Congress commissioned a National Academy of Sciences committee to investigate the condition of the engrossed original. While not specifically mentioning Stone, their report noted that “press copies have been taken from the original so that a part of the ink has been removed from the parchment.” Since the late 19th century, articles have often referenced the debate over whether a press copy was made for the 1823 facsimile, though there is no proof that Stone used such a technique.

Manuscripts expert Seth Kaller discounts the idea that Stone used a wet or chemical transfer process. Given that John Quincy Adams was already concerned about the state of the original in 1819, Kaller finds it unlikely that either Adams or Stone would have allowed continuing damage: “The whole idea that Stone would do anything that would risk deteriorating the original is not supported.”

Kaller believes it is quite possible Stone traced the original, though there isn’t any evidence, or Stone could have done the engraving freehand, with the original at his side. Kaller’s research, as well as a detailed comparison by the “Declaration Resources Project” at Harvard University, have identified small variations between the two documents. Harvard’s project pinpointed small punctuation omissions in the 1823 version, and Kaller has noted subtle differences in the flourishes of the capital “T” in “The Unanimous Declaration” at the beginning of the document (Fig. 6). It turns out that Stone’s Declaration isn’t a true “exact” copy.

Fig. 6. Detail comparison of the “T” in the engrossed Declaration of Independence (left) and the Boston Public Library’s copy of Stone’s 1823 engraving (right). The “T” in the Stone facsimile contains a crossbar and different curved flourish.

In their quest to stabilize and preserve the now nearly invisible text, conservators at the National Archives have done extensive research into the history of the Declaration. In a 2016 article, NARA chief conservators Mary Lynn Ritzenthaler and Catherine Nicholson reviewed the physical changes to the then 240-year-old document, acknowledging, “There is little written evidence of what may have happened—or when—to alter the document.” Based on comparisons with photographs of the Declaration from 1903, notable deterioration occurred even in the 20th century.

The specific methods by which Tyler and Binns captured facsimiles of the Declaration’s signatures, and Stone the full document, remain unclear. All three produced facsimiles of the signatures, and, notably, that portion of the document is most faded.  In October 1870, The Historical Magazine was reporting that the original was “said to be rapidly fading out, so that, in a few years, only the naked parchment will remain. Already, nearly all the signatures attached to the Declaration of Independence are entirely effaced.” Even without a wet transfer process, tracing likely would have brought the engravers into direct physical contact with the document. (Watch printmaker Andrew Stein Rafferty demonstrate the reproductive engraving process from tracing to printing.)

It would be ironic if Adams and Stone’s efforts to help safeguard the iconic document had indeed hastened its deterioration. But it remains a monumental achievement. As NARA archivist Leonard Rapport wrote in a 1979 article on fakes and facsimiles, “From the original Stone copperplate engraving, directly or indirectly, stem all the millions–literally, millions–of facsimiles of the engrossed Declaration of Independence.”

Exploring the Declaration Yourself

Below we offer you the opportunity to examine and compare digitized images of the original engrossed Declaration of Independence with the facsimiles and zoom in on the mysteries that remain between the original and the prints. Note that due to different angles of the original photography, the texts may not fully line up in the layered view. 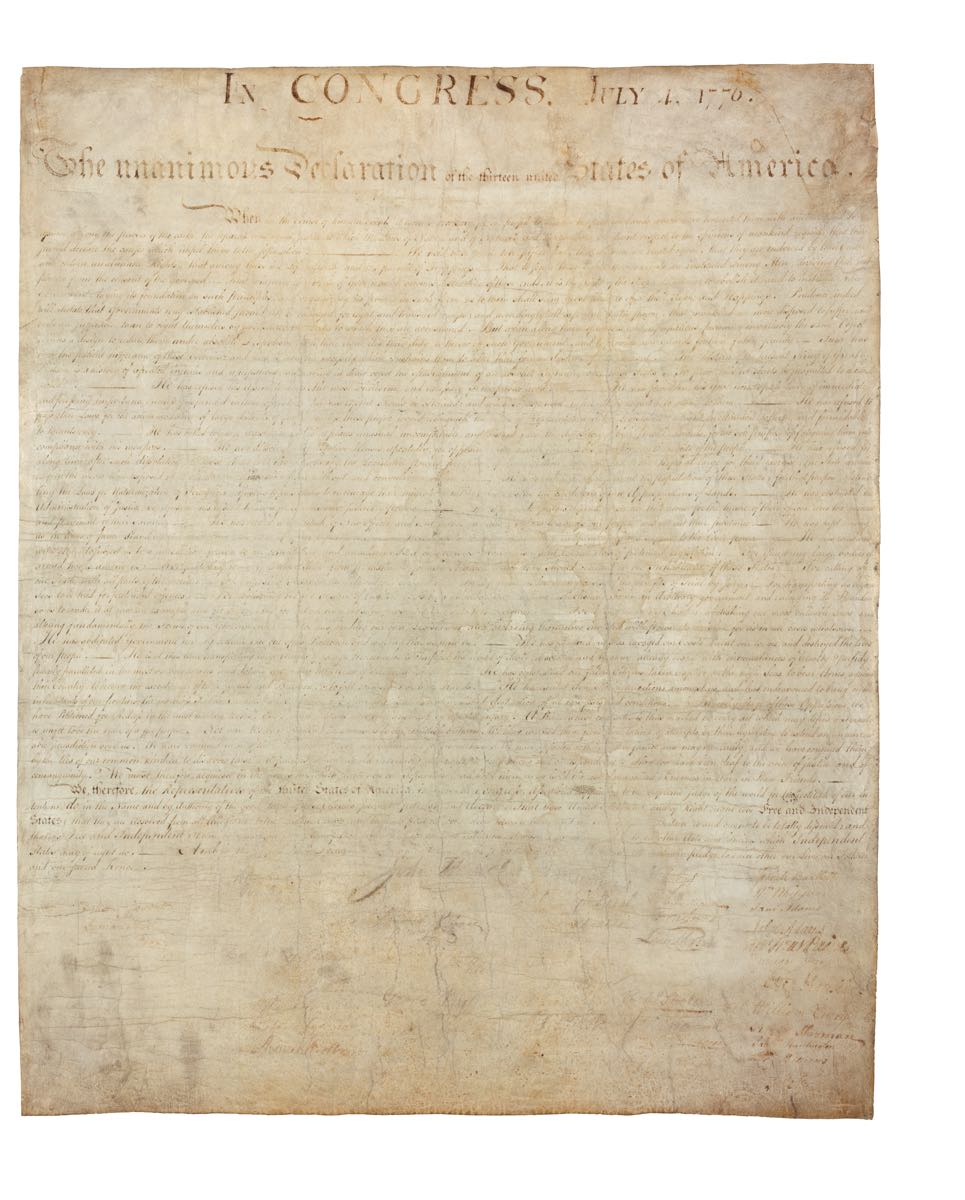 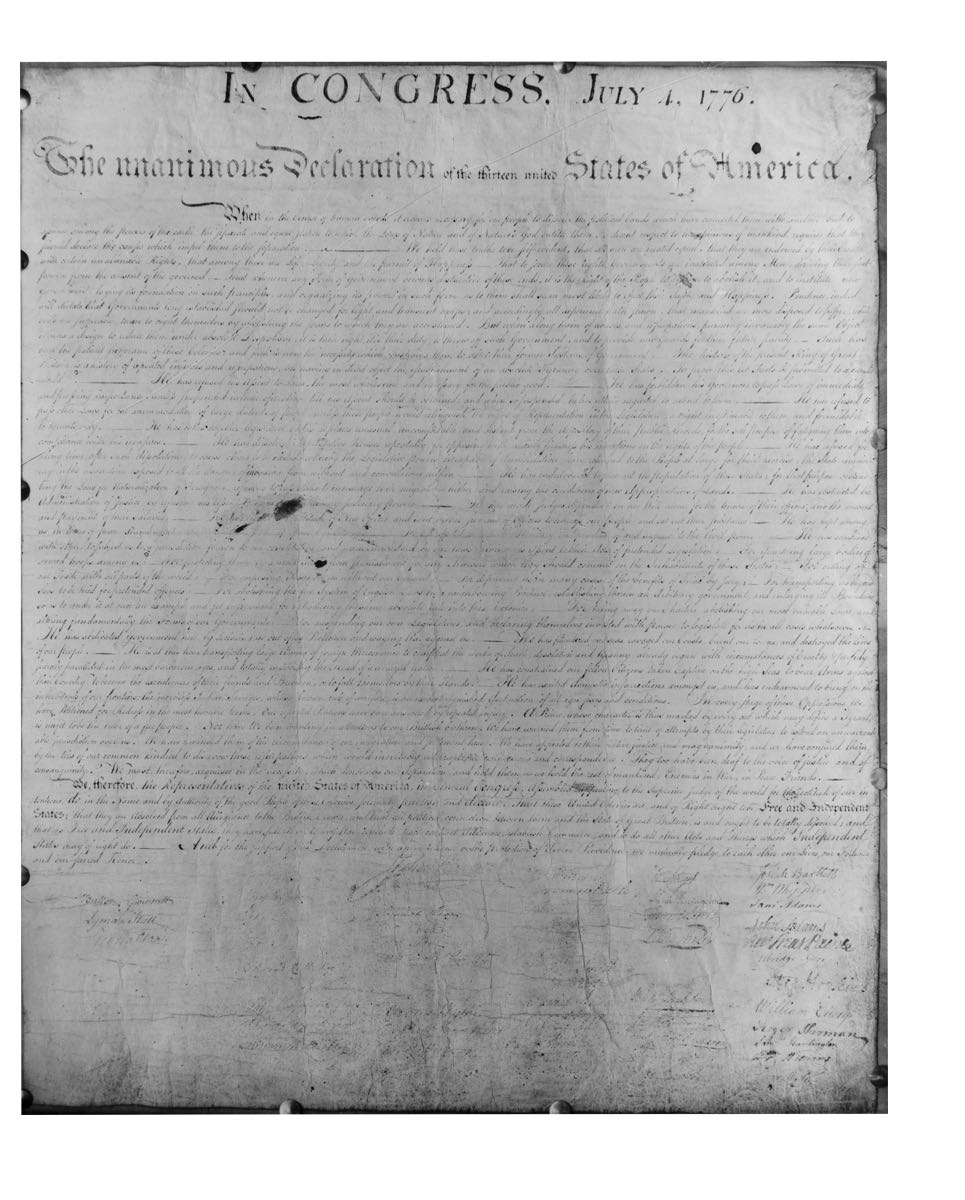 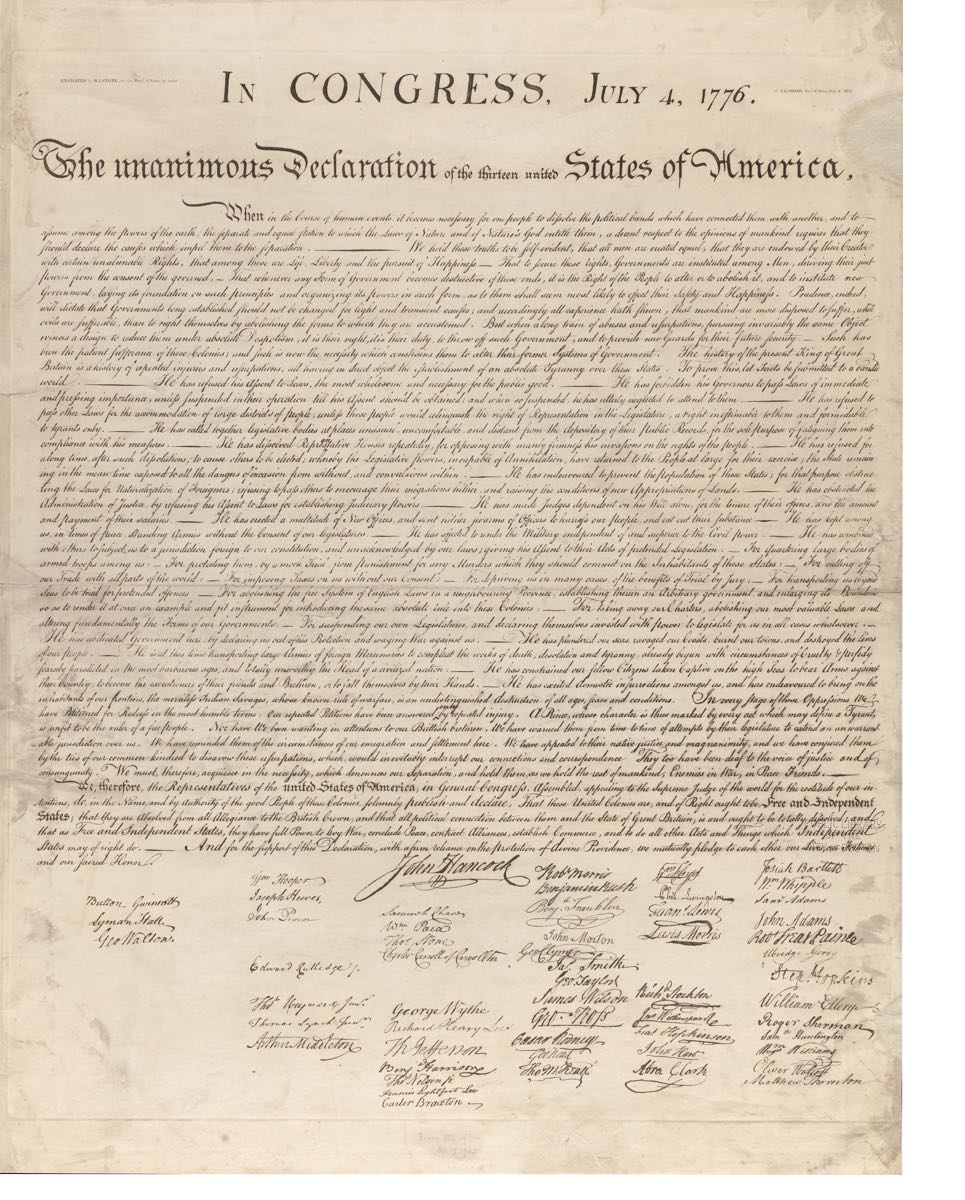 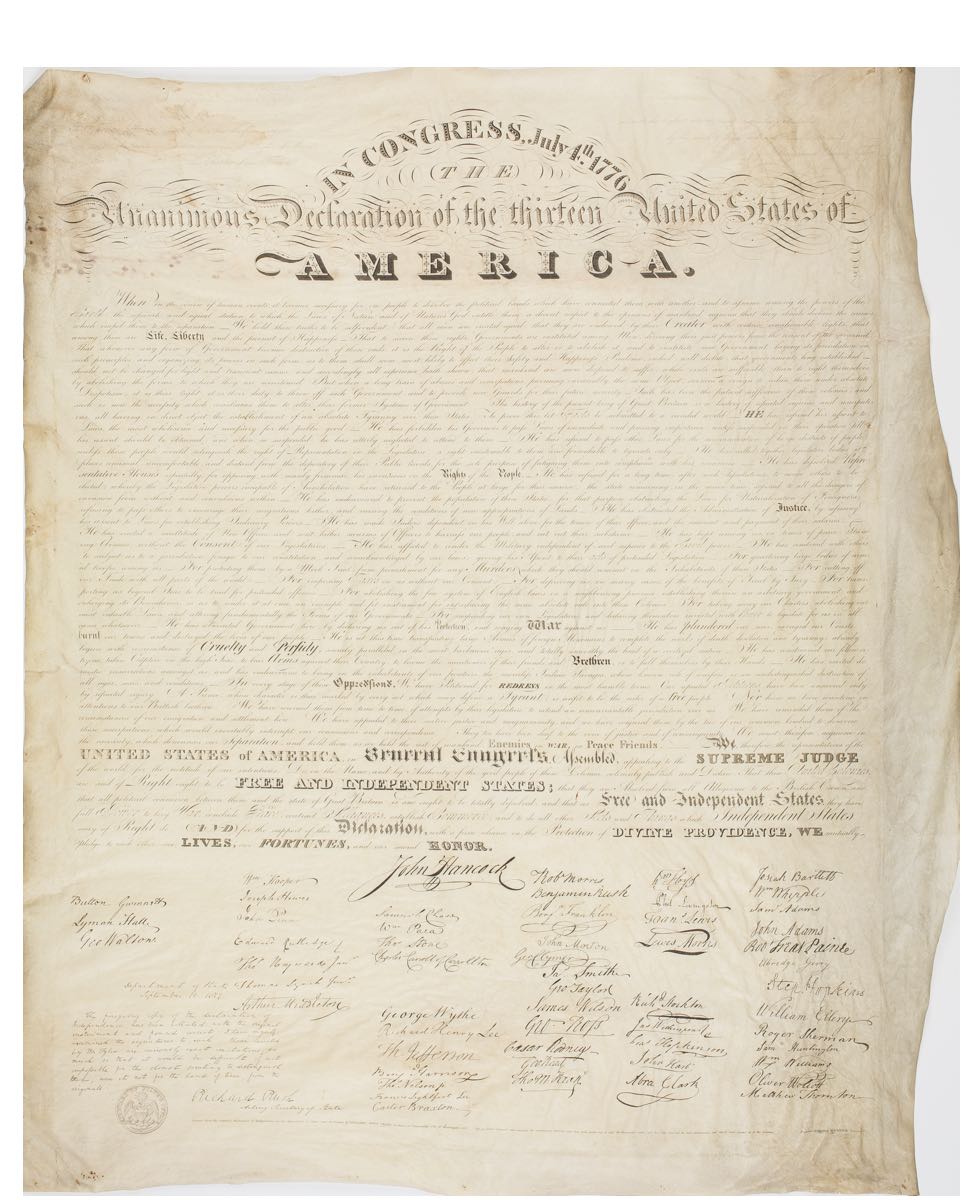 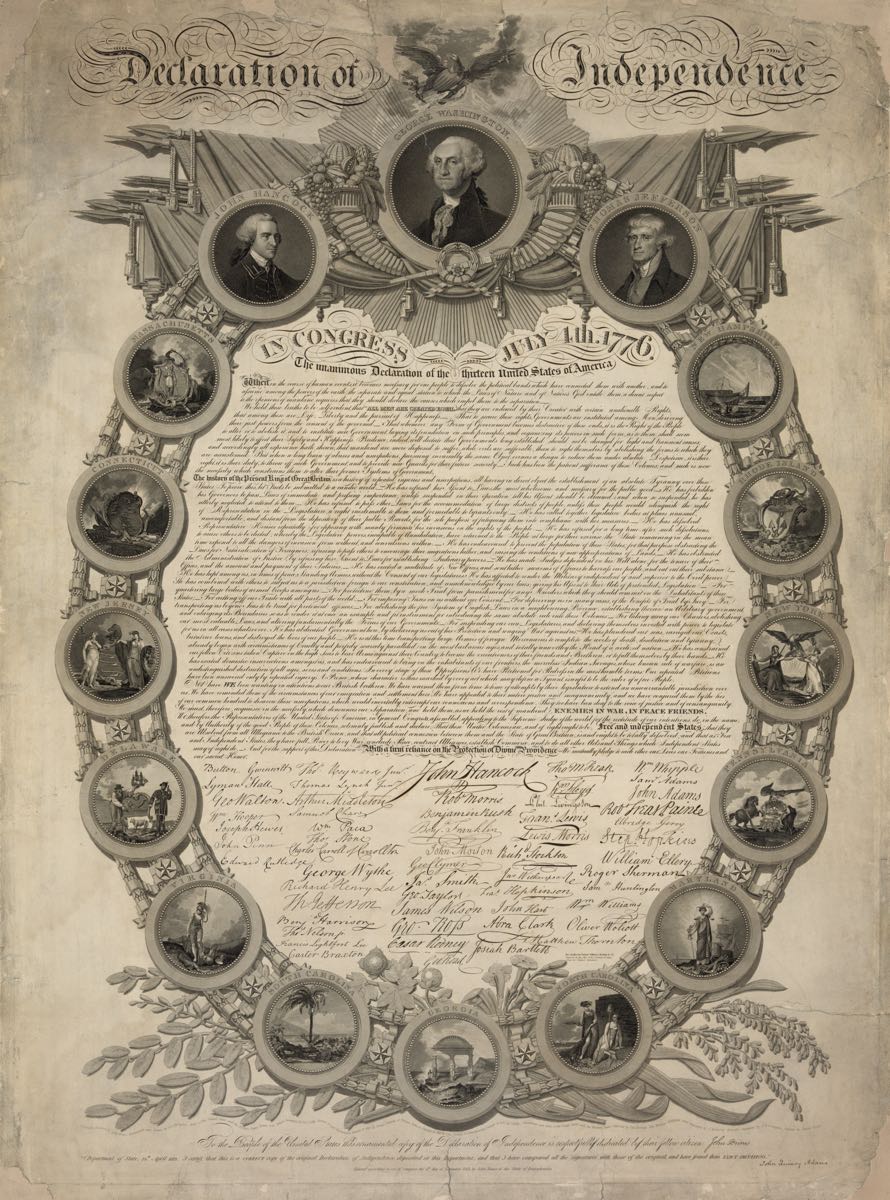 Levin C. Handy (photographer), Declaration of Independence as it appeared in 1903 while at the U.S. State Department [Photograph, April 23, 1903]. Courtesy of the Library of Congress.

Learn more about the Declaration of Independence and early engravings

John Bidwell, “American History in Image and Text” in Proceedings of the American Antiquarian Society, 1989.

Mary Lynn Ritzenthaler and Catherine Nicholson, “The Declaration of Independence and the Hand of Time” in Prologue Magazine (Fall 2016, Vol. 48, No. 3).