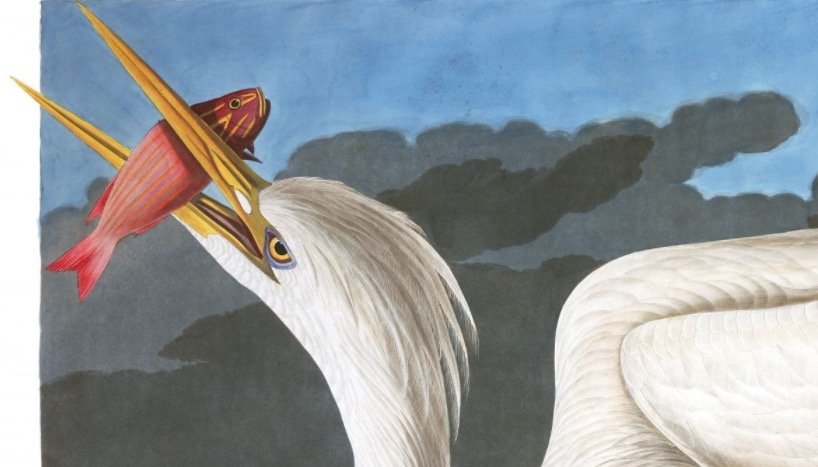 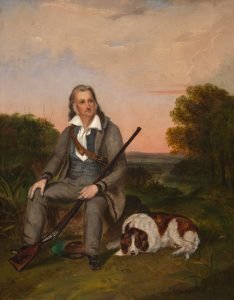 John James Audubon’s Birds of America (1827-1838) has always been worthy of superlatives. After the early prints were released, one newspaper proclaimed that Audubon was “executing the most magnificent work ever ventured upon, we suspect, by individual enterprize [sic].”

In 1827, Audubon laid out his plan to potential subscribers: to publish prints of his drawings of all birds native to the “United States and its territories.” He estimated there would be about 400 plates when finished. When the very last birds were finally distributed in 1838, 435 hand-colored prints filled four volumes.

His achievement led one contemporary critic to declare that, “To paint like Audubon will henceforth mean to represent Nature as she is.”

As an artist and naturalist, Audubon strove for conventional goals, of course. He wanted to accurately depict the proportions and shape of the birds and present them in colors true to nature. But his project also had an audacious component. He didn’t just want to draw every bird accurately; he wanted to depict them at their actual size, or as he termed it, “of the full size of life.”

Using a board marked with a wire grid, he would secure a freshly killed bird to it in a lifelike manner by means of additional wires and threads. He then sketched the bird on drawing paper marked with an identical grid, so that the result was an image both lifelike and life-size. Background and foliage could be added later. 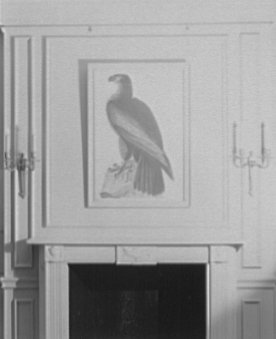 Audubon’s “Bird of Washington” photographed above a fireplace in the National Academy of Design gives a sense of its relative size. Courtesy of the Gottscho-Schleisner Collection, Library of Congress, Prints and Photographs Division.

When it came time to create the prints, the paper had to accommodate the biggest birds. For consistency, all birds big or small would end up on the largest paper available, a size known as “double elephant folio,” measuring 26.5 x 39.5 inches. In practice, this means that just one volume of Birds of America weighs nearly 40 pounds. Audubon acknowledged it was so large as to “require two stout arms to raise it from the ground.”

Audubon defended his decision: “As to the size of the paper, which has been complained by some, it could not be avoided without giving up the desire of presenting to the world those my favourite objects in nature, of the size which nature has given to them.”

Audubon recognized that size was a crucial selling feature to set his project apart. He planned to send prints to subscribers in “moderate intervals,” five at a time, and from the start, he promised that each group would contain a bird from “the largest drawings, one from one of the second size, and three from the smaller drawings.” Historian Gregory Nobles explains that Audubon “was careful not to use up the big birds too soon, so he doled them out slowly, keeping his customers waiting for the next number. This sequence didn’t make for good science—it certainly had nothing to do with the ornithological classification of birds—but it was very smart marketing.”

The Birds of America were numbered sequentially from 1 to 435 with a plate number printed in Roman numerals in the upper-right corner of each print. By browsing through the prints, one discovers that just as Audubon had promised, the first print in each group of five (i.e. prints with plate numbers ending with a 1 or 6) is almost unfailing a large bird. In the very few cases where this isn’t the case, Audubon worked hard to make up for any potential disappointment. If he couldn’t bring the size, he certainly brought the drama, as with the now-extinct Carolina Parakeet (“Carolina Parrot” – Plate 26) and the Brown Thrasher (“Ferruginous Thrush” – Plate 116). 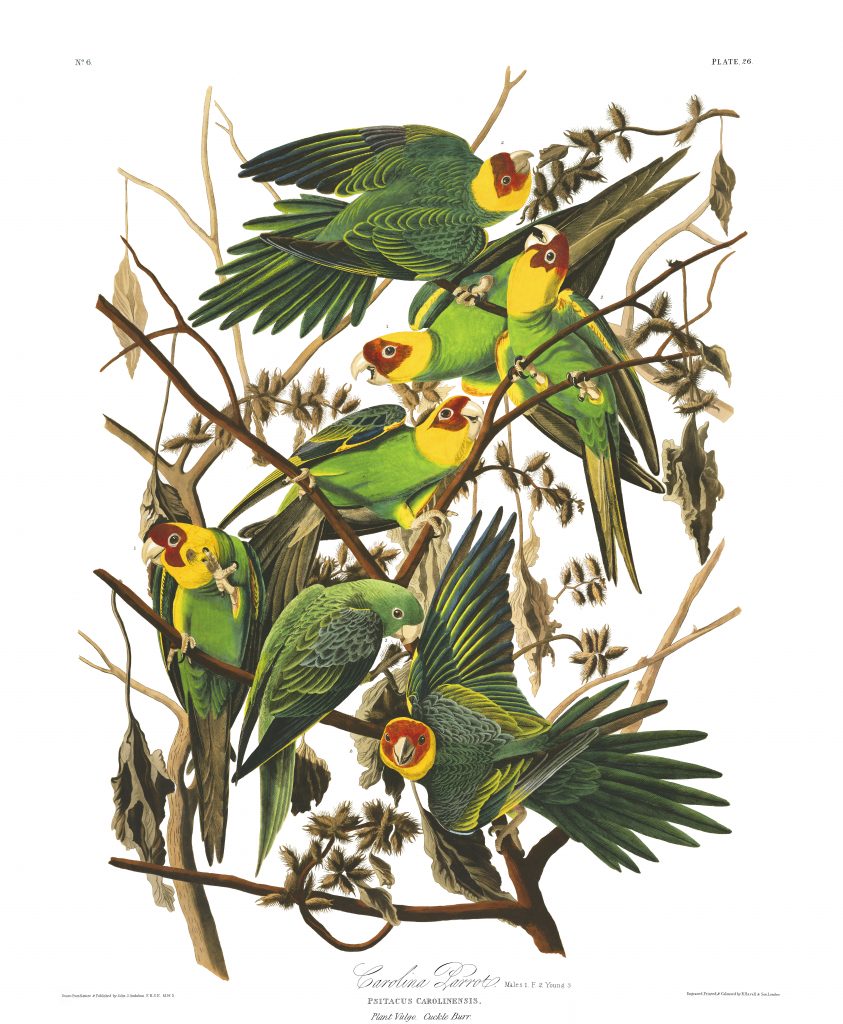 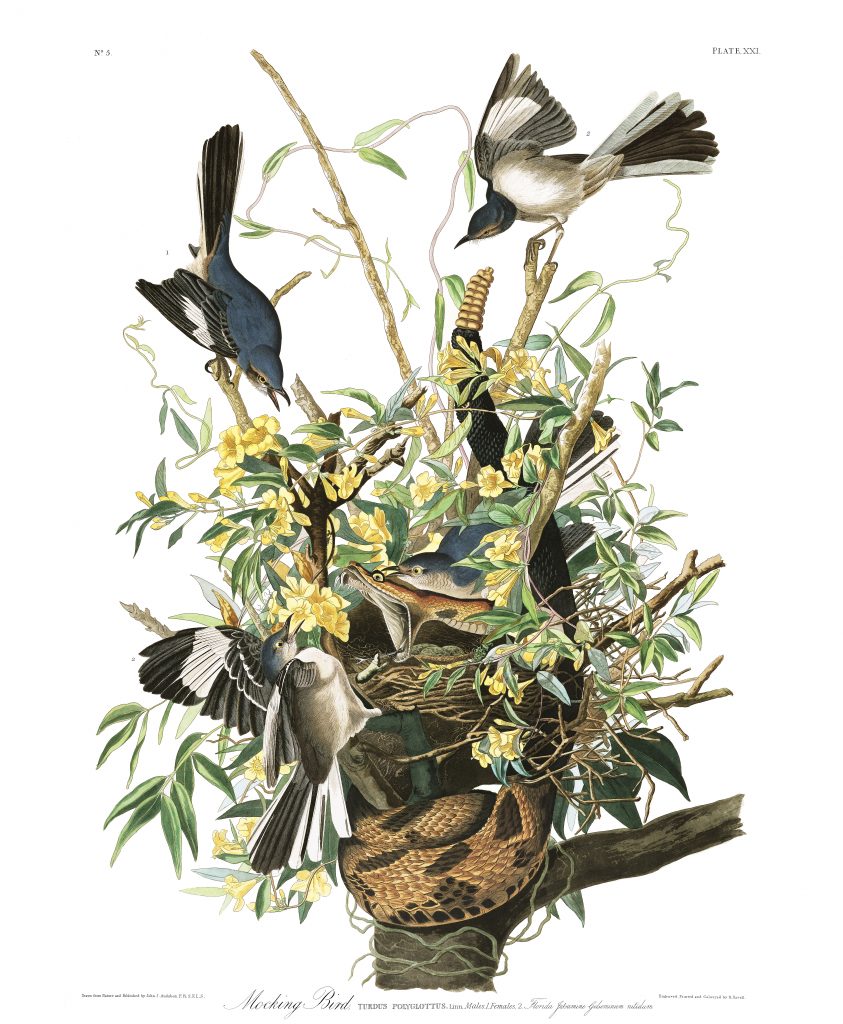 Big or small, Audubon’s birds are works of art. But the smaller species, like the Ruby-crowned Kinglet (“Ruby crowned Wren” – Plate 195) or the Boreal Chickadee (“Canadian Titmouse” – Plate 194), would have fit just as happily on much smaller sheets. Most birds didn’t require their more than 2 x 3 feet paper cages, which brings up an interesting question:

What are the biggest birds in Audubon’s Birds of America?

True to Audubon’s objectives, his biggest birds are North America’s biggest birds. Size, though, can refer to multiple measurements: wingspan, body length, or weight. The North American bird with the longest wingspan (California Condor, plate 426) is neither the tallest bird (the Whooping Crane, plate 226) nor the heaviest (the Trumpeter Swan, plates 376 and 406). Even with the expansiveness of the double-elephant paper, Audubon faced challenges making some birds fit. He aimed to depict each species in a natural pose, though, as you’ll see, these big birds didn’t always make that easy. 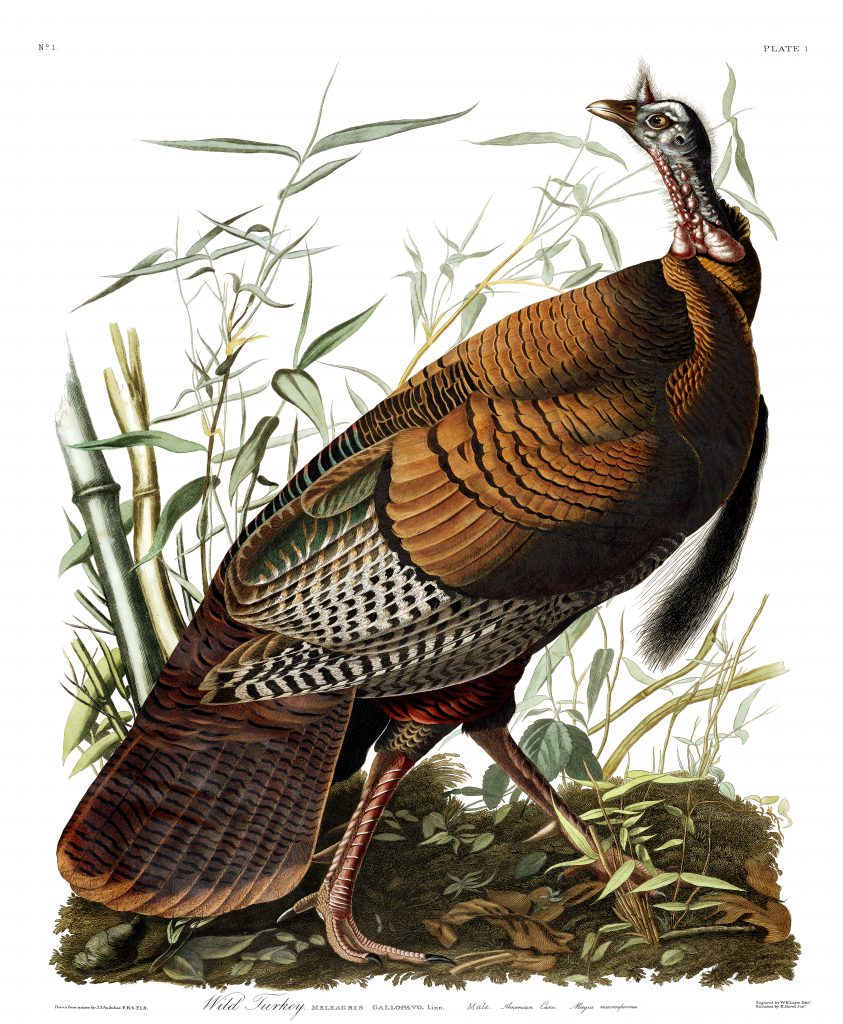 Susanne Low notes in A Guide to Audubon’s Birds of America, “It is difficult to find this print in pristine condition. As the first one sent to subscribers, it was proudly shown off to family and friends, so that it was much handled.” 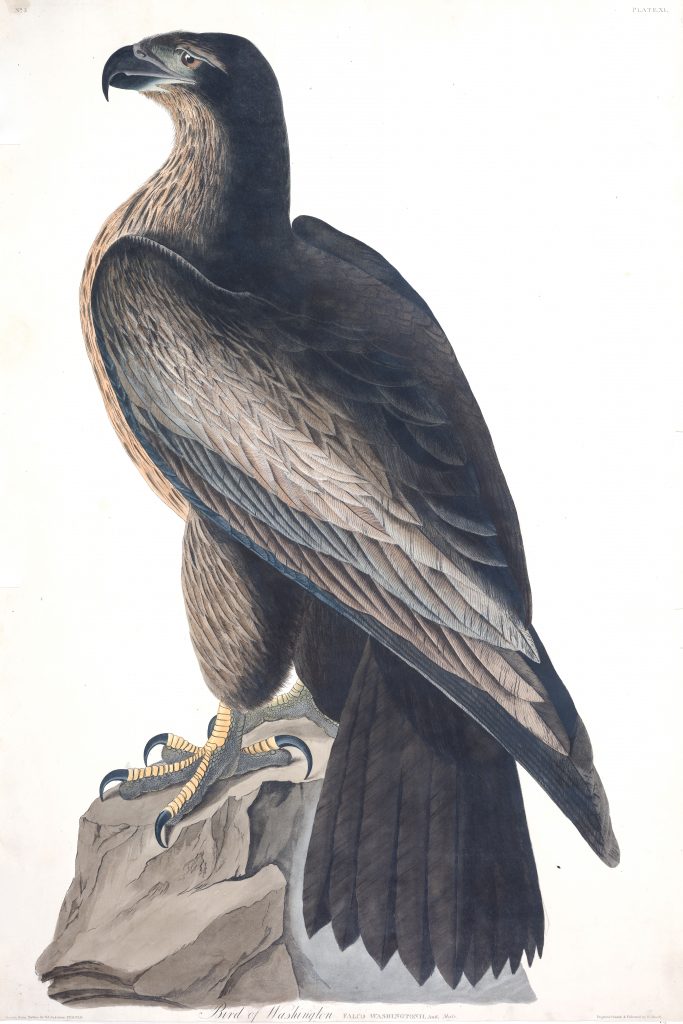 Audubon thought he had discovered a new species when he saw this bird in the wild. It was later identified as an immature Bald Eagle. 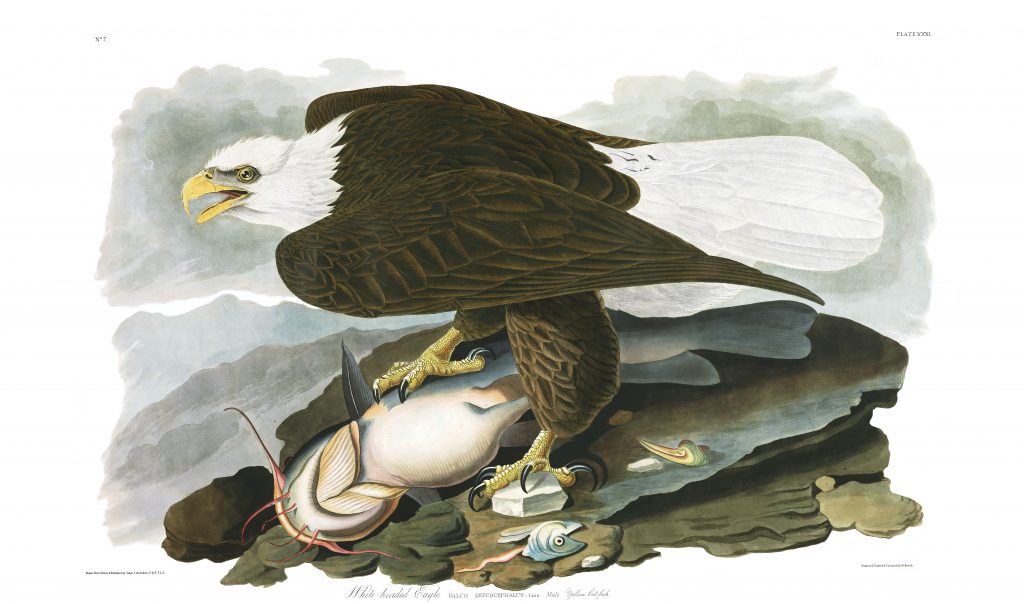 Along with his misidentified “Bird of Washington” (Plate 11), Audubon created this print of an adult bald eagle and another of a young one (Plate 126). 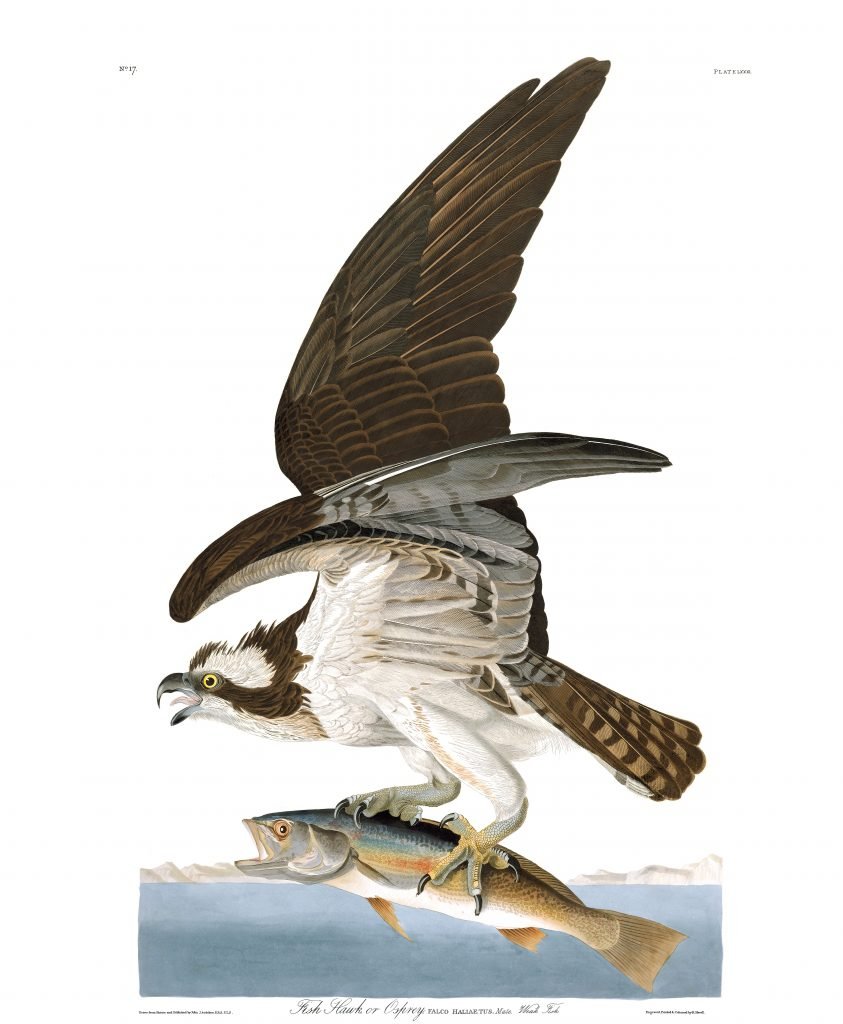 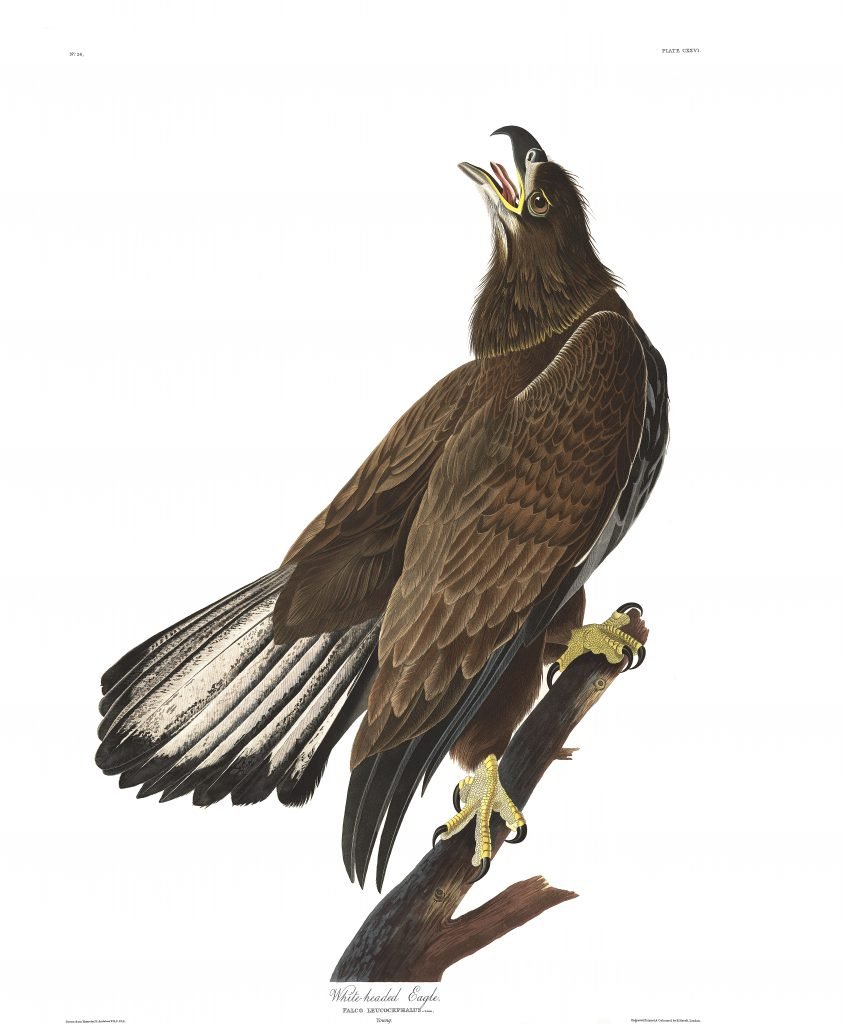 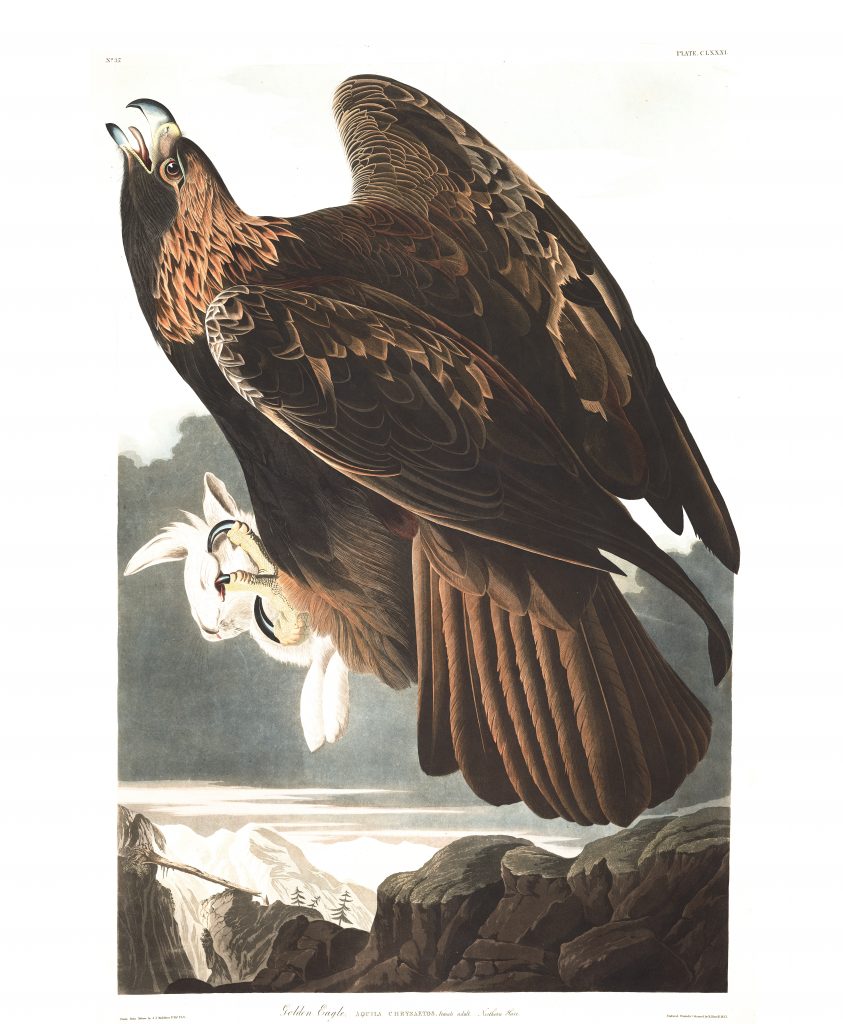 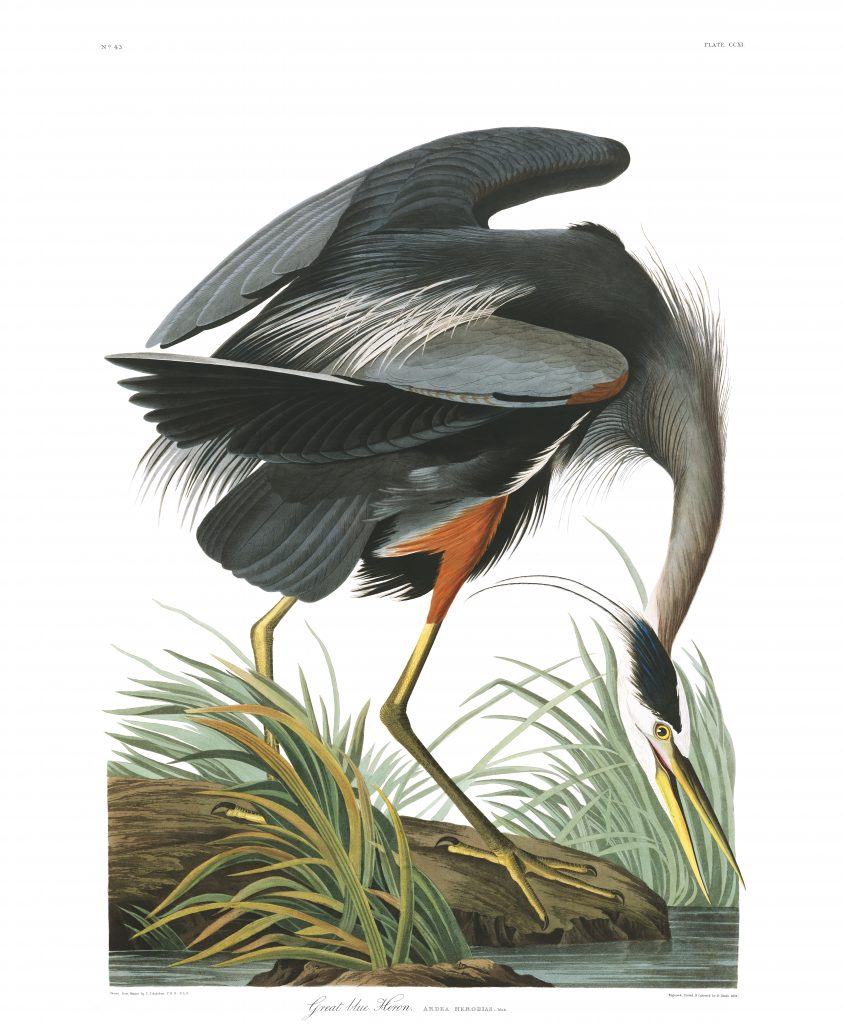 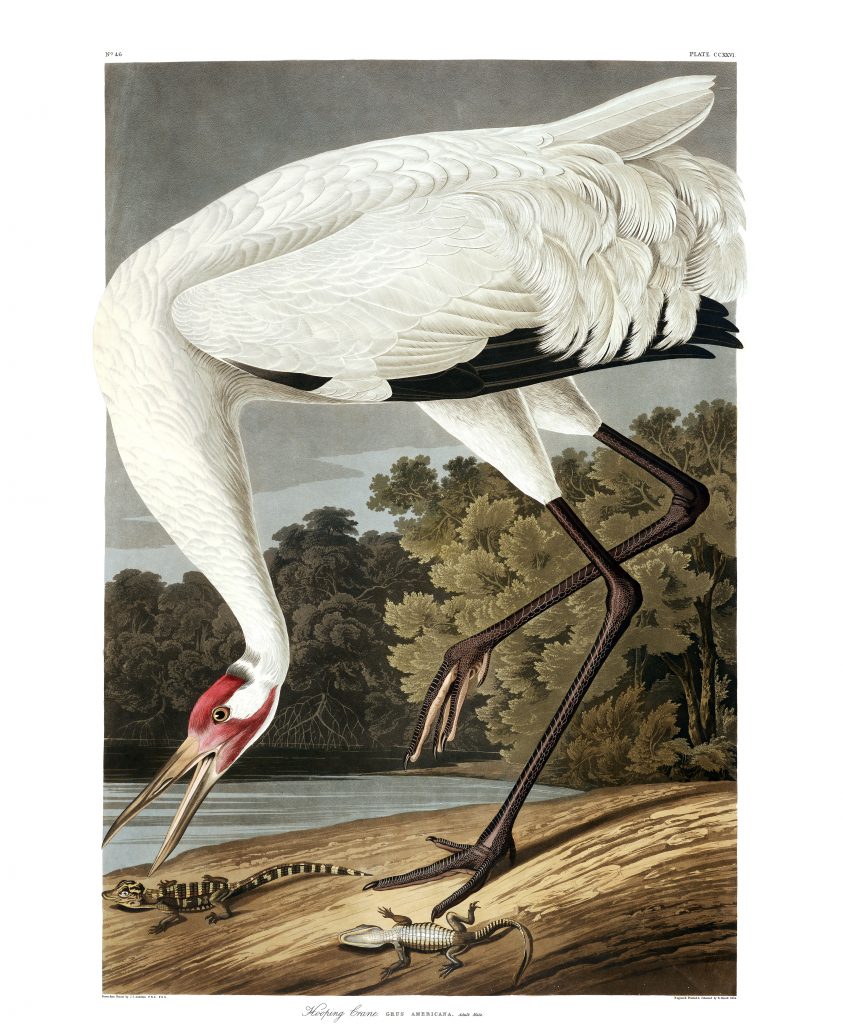 The Whooping Crane is the tallest bird in North America, and, notably, one of the only birds whose body peeks out into the plate margins. 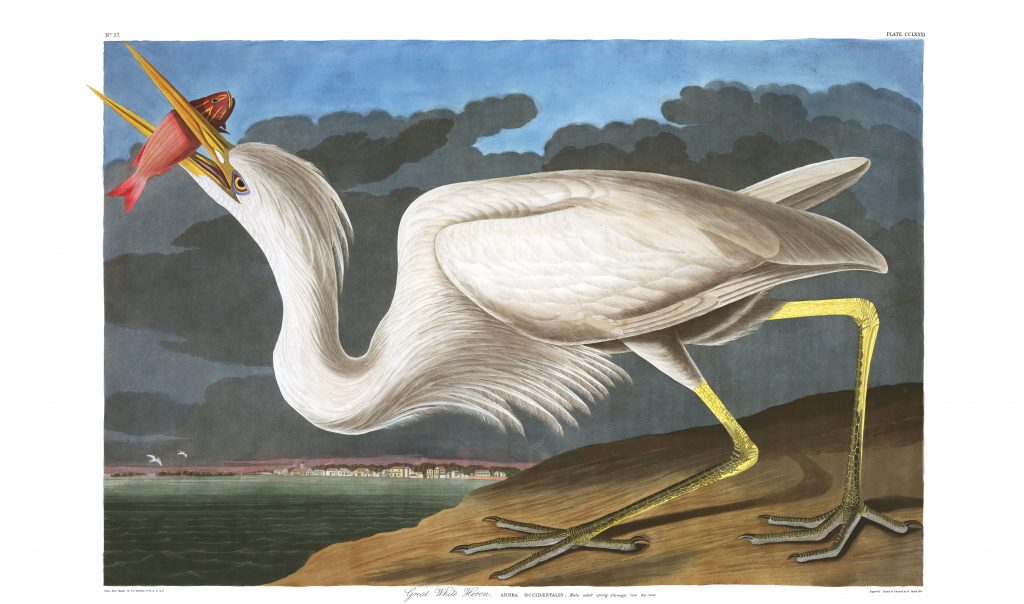 The Great White Heron was once considered to be a distinct species but is now treated as a subspecies of the Great Blue Heron (Plate 211). 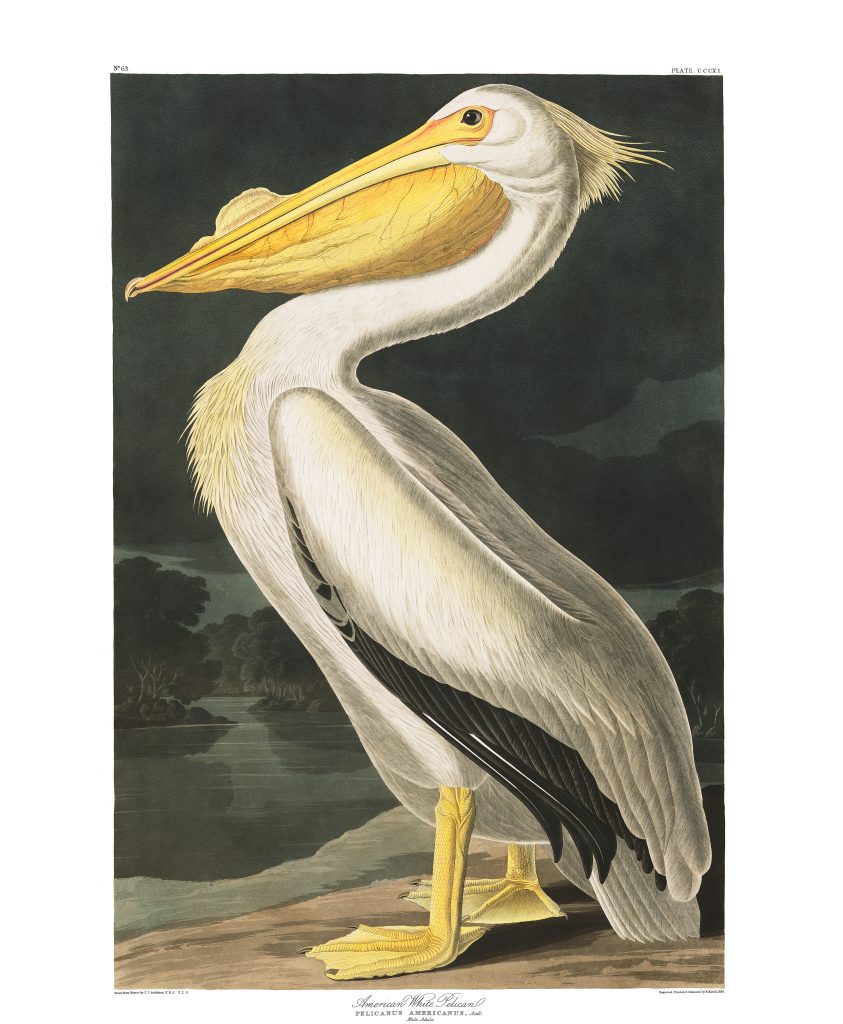 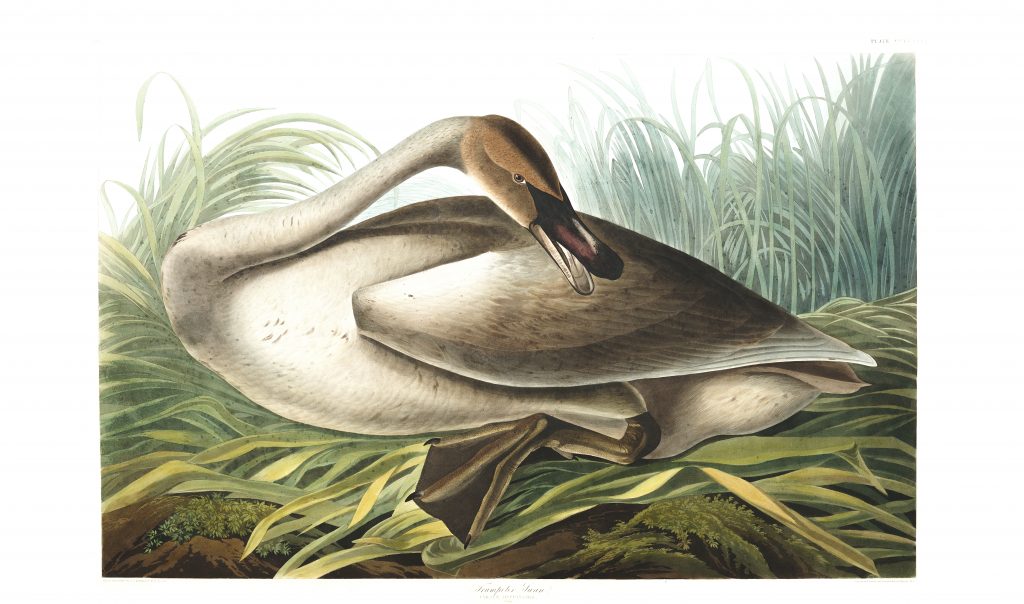 Audubon included two plates of Trumpeter Swans, this one showing a young swan and Plate 406, which shows a white adult swan. 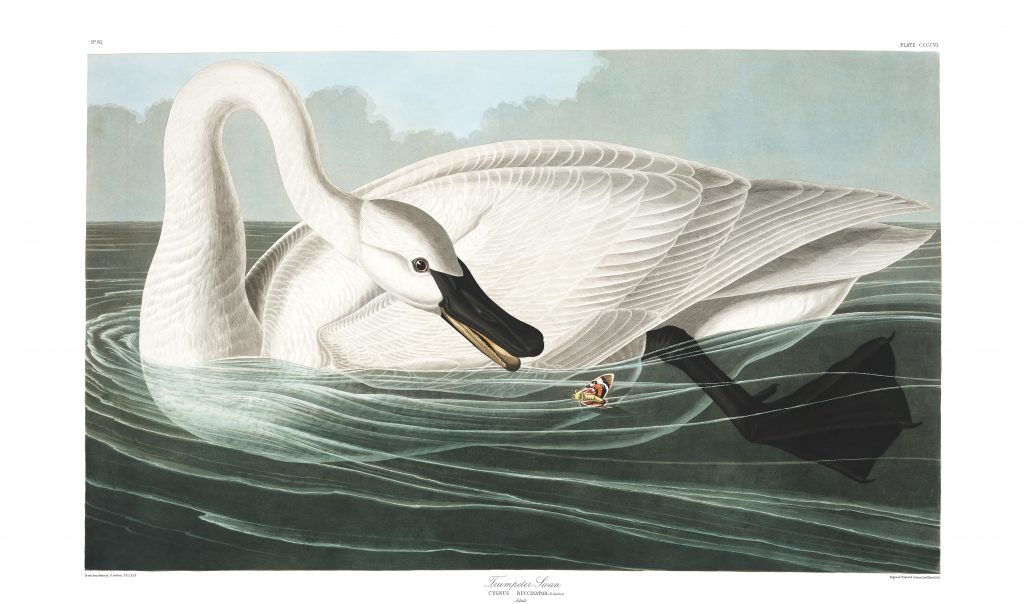 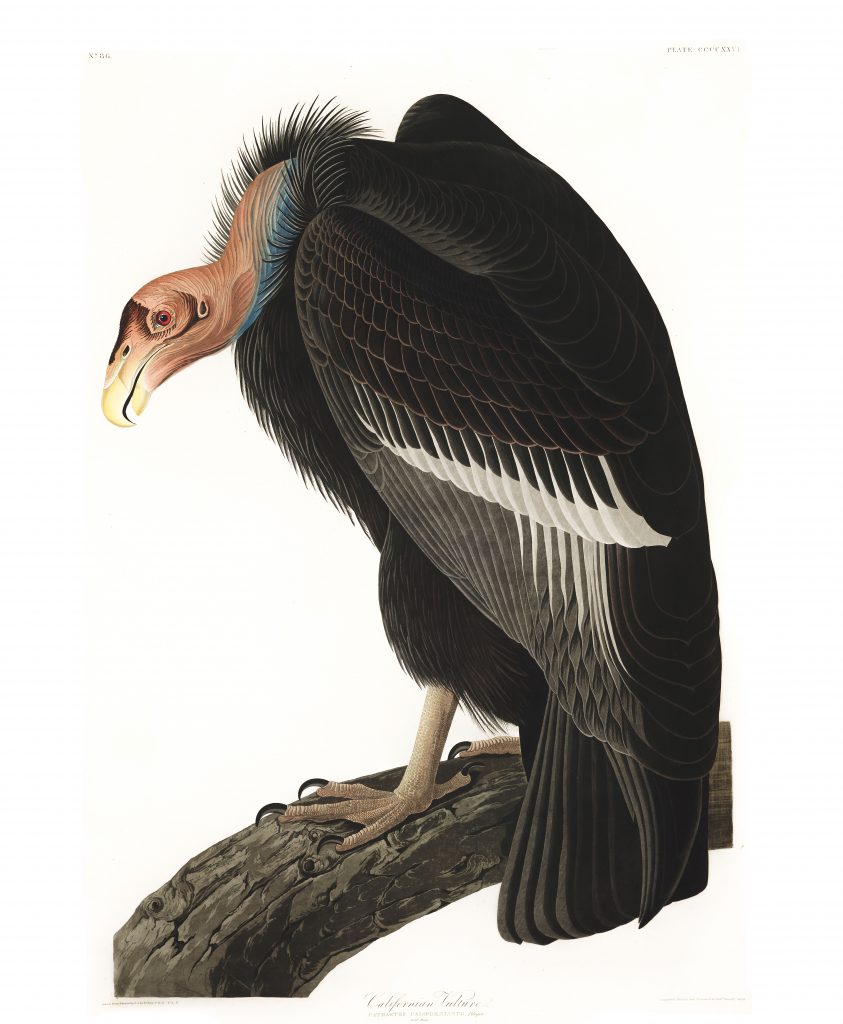 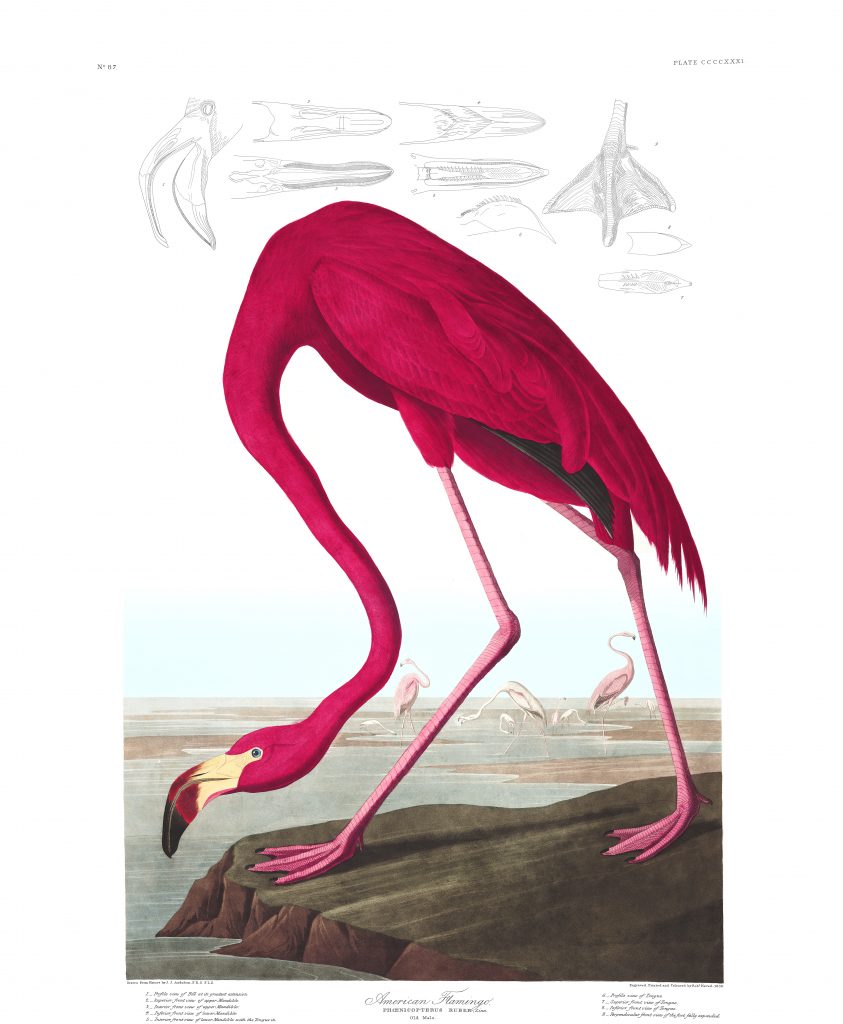 Superlatives for Audubon’s birds weren’t limited to the 19th century. A copy of Birds of America would go on to be among the most expensive books ever sold ($11.6 million in 2010), and through the 20th century, it held the record as the largest book ever published. Michael Hawley’s five-by-seven foot Bhutan: A Visual Odyssey Across the Kingdom stole the title in 2003.

Learn more about Audubon and the Birds of America