Back in the early 2000s, I purchased a really fine etching done by Peter Moran (1841-1914) from AHPCS member-dealer Rona Schneider. I had met Rona years earlier, and she had always encouraged me in my research efforts. We met this time at the New York Print Fair in early November. I had just begun to collect Moran material, with a goal of creating a thorough and complete catalogue of all his etchings.

The particular etching Rona had in her booth, The Return of the Herd (fig. 1), showed cows being coaxed home from a threatening storm, which appealed to me. When I mentioned my long-term goal to Rona, she just smiled, rolled her eyes a bit, and said, “Oh my, so many cows!” I wasn’t quite sure then what she meant, since I hadn’t yet delved into Peter Moran’s work, but in time I would come to appreciate her warning. Indeed this Moran brother did many etchings with cows—cows in streams, cows in fields, and cows in storms— which later proved daunting to inventory. 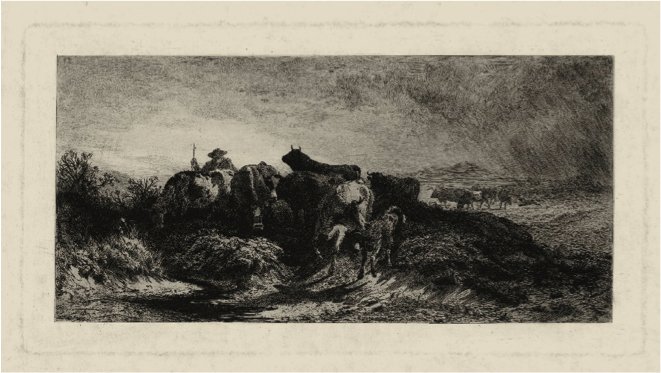 I learned that this particular etching was one of Moran’s earliest, done in 1875—the first year he actually focused on etching. I also discovered that Moran had completed a large 3-1/2 x 7-foot oil painting in that same year. It, too, was titled The Return of the Herd.

Had the painting come before the etching or vice-versa? Or might they have been generated simultaneously? I wasn’t actually sure the scenes were identical. If the scene of the painting and etching matched, then the etching could be classified as a reproductive etching, and in this case more accurately termed a replica etching, since Peter was copying his own work, and not that of someone else.

Definitely both works were created within a one-year window. At that time Moran shared studio space at 1334 Chestnut Street, Philadelphia, with Stephen Ferris, his brother-in-law and life-long friend and fellow painter-etcher. Moran must have painted this large oil and etched the plate in that studio space.

In the Philadelphia City Archives, I found a copy of the handwritten registration form that Moran completed in October 1875 to enter his artwork—three oil paintings and an unspecified number of watercolors and etchings on copper—in the art exhibition to be part of the Philadelphia-sponsored 1876 Centennial Exhibition (fig. 2). The first and largest of the oil paintings that Moran listed on the entry form needed wall space six feet by nine feet to handle its surrounding frame. Although Moran gave no titles on the form, this must have referenced Return of the Herd. 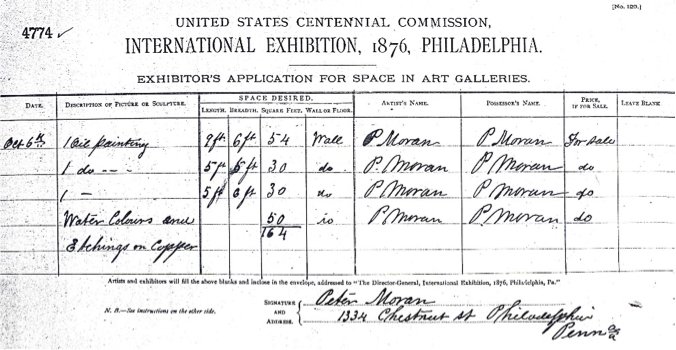 Moran’s painting had the dubious honor of taking the wall space originally intended to display Thomas Eakins’s large and powerful The Gross Clinic. At the last minute, the hanging committee determined that Eakins’s painting—entirely too gory and graphic to include with the other art—needed to be redirected to the Medical Pavilion, giving way to Moran’s piece. Moran’s group of fifteen etchings, not individually titled but clustered in frames, appeared in the exhibition’s Annex Gallery 22.

Moran’s painting and his group of etchings were both huge successes at the Centennial. Near the end of the show, on 27 September 1876, he received a medal from the Centennial Commission, “Commended for merit in genre painting,” for his Return of the Herd painting, one of forty-one medals given to less than five percent of the American paintings exhibited. He also received a separate medal for his group of etchings, one of which must have included the etched version of Return of the Herd.

My research continued on this etching with the goal of creating as accurate a catalogue entry as possible. For one thing, I wanted to make sure that it actually did replicate the painting. I searched during the next six years for the current location of the painting without success; on-line and institutional queries came up empty-handed. I found a 1981 Sotheby’s auction entry with a variant title that sounded like it might be this painting, but the catalogue had no image of it. I tried to access the Sotheby’s archives without success.

Fortunately, because the painting had won a medal, it captured significant notice in the art publications that came out during and shortly after the Centennial. Two separate write-ups included two independently generated wood engravings that illustrated the oil painting. I felt I was close to my answer!

In 1876, art critic Edward Strahan (the pen name used by Earl Shinn) described the “spirited” scene of the painting and had it illustrated with an engraving by Van Ingen & Snyder (fig. 3):

In a pleasant rolling country near the Brandywine or the Wissahickon the herdsman and his dog are driving home the cows after the soft afternoon storm which makes the herbage so tempting for a lingering bite. Mr. P. Moran’s cattle are always obviously studied from nature. In the present picture, the black head of the central animal, relieved against the brightest sky where the storm breaks away, makes fine pictorial effect for the artist; and the pretty play of the near cow and calf is true to life [Masterpieces of the Centennial International Exhibition, 1876, vol. 1, pp. 43–44]. 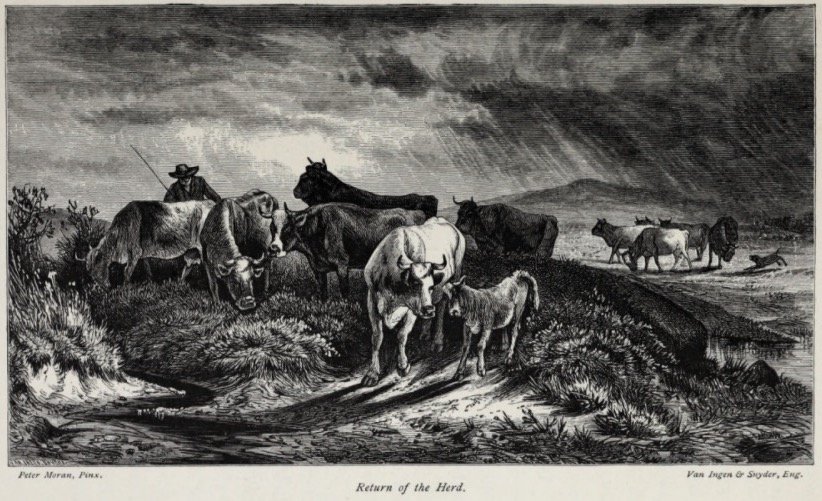 The overall scene in the wood engraving—which was supposedly based on the painting, not the etching—matched the etching quite nicely, except for some minor discrepancies: the herdsman’s staff was tilted differently (to the left), and a bit of the right side of the etching was eliminated.

Then I found a second write up, by George Sheldon in the February 1878 issue of the Art Journal, with a different wood engraving of the painting, this time by John Filmer (fig. 4). This engraving threw a wrench into my analysis. Not only did the herdsman’s staff entirely disappear—something I could have dealt with—but more importantly, Filmer’s scene, as published, was a mirror-image to the etching and the earlier wood engraving. 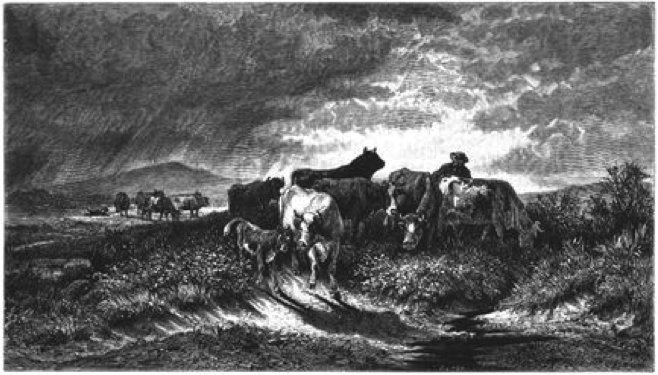 Was the threatening storm actually on the left side of the painting, as imaged by Filmer, or on the right side as seen in the Van Ingen wood engraving and in Peter Moran’s own etching? Said a different way, did Moran take the time to reverse his painted image on the etched plate so the prints of the etching would be right-reading with the painting, or not?

Being issued by the highly respectable Art Journal, I could not dismiss Filmer’s engraving as inaccurate.  Sheldon also republished the same image—still reversed—in his book, American Painters, 1879, which was reissued in 1881.

I had one other potential source to check, which I learned about a short time later. In 1890—fifteen years after the completion of the painting and first etching—the prolific etching publisher Radtke, Lauckner and Company commissioned Moran to do a larger etched version of this same scene, again with the same title (fig. 5). 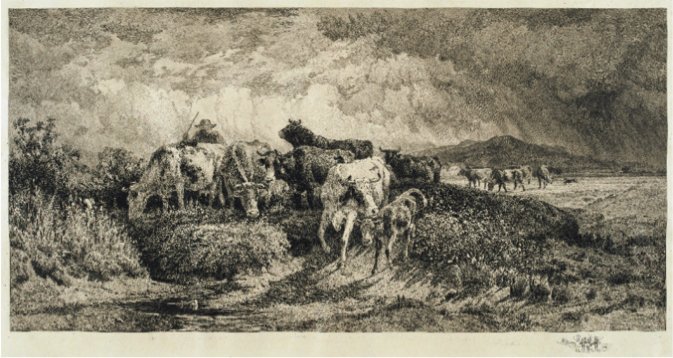 By this time, the public’s taste for small, hand-held etchings had morphed into a craving for large “wall art.” What better subject matter to market than a successful Centennial prize-winning painting! Moran complied with the publisher’s request. This time he worked on a plate with more than nine times the area of the first, with a resulting shift in atmospheric feel and intimacy, but with a scene having the same orientation as the first etching. Despite this match, I still had no guarantees about how either related to the original painting. 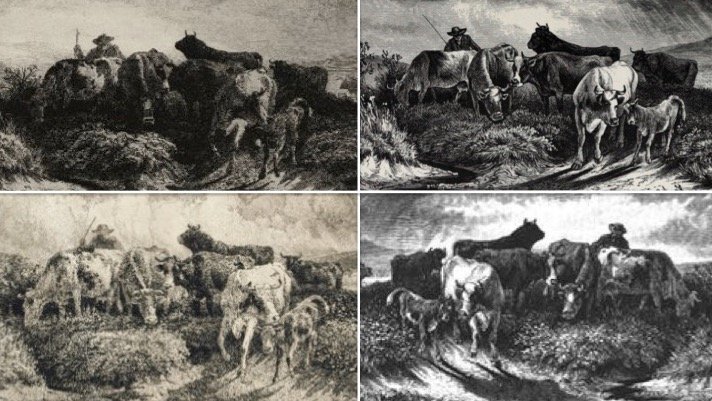 My work on Peter Moran reached final publication in 2010 without resolving the question. Without the painting, I was at a loss. I was honest about my uncertainty in several footnotes.

Fast forward five years. A slick catalogue for an up-coming sale of paintings arrived in my mail, unsolicited, from the Scottsdale Art Auction group in Arizona. This firm specializes primarily in western art, most of it modern works, and I was fairly sure I would not find anything of interest, but thumbed through the material quickly. Lo and behold! Toward the very end of the catalog, they featured a huge oil painting by Peter Moran, dated to 1875. The scene stopped me cold (fig. 7).

Here it was, The Return of the Herd, with an orientation that matched both of his etchings very nicely! The auction catalogue had an incorrect title, and mentioned none of the painting’s provenance, but from the size, date, and description, I knew this had to be the Centennial painting. It was fun to see how the series of etchings and wood engravings had constantly shifted the herdsman’s staff, with the Van Ingen wood engraving being the most faithful. Both of Peter’s own etchings had it skewed differently. Through tremendous luck, I was a high phone bidder on the oil painting. Not only had I finally solved my mystery, but I could now reunite the 1875 award-winning replica etching with the celebratory painting. And, indeed, Moran had taken the time to reverse the image on his plates.

A final, and even more serendipitous event happened two years after this. Another great AHPCS member-dealer, Hollie Powers Holt, contacted me about material she had for sale from the estate of an old family friend of hers, which contained a lot of Peter Moran material. I figured that this material must have come to her clients from the estate of Moran’s second wife, who had died in 1951, in a New Jersey suburb of Philadelphia.

I was thrilled with what Hollie was able to offer me, some of which I ultimately bought, including original Moran copper etching plates and several of his monotypes. Mixed in with the material were several large award certificates that Moran had received throughout his life. One of the items, which boggled my mind and which she generously just threw in with my other purchases, was Moran’s original Centennial certificate (fig. 8), listing both his painting and his etchings as award winners. This huge 20” x 27-1/2” lithograph, ink-signed by three Centennial officials, was to me priceless. Now I had reunited the trifecta—the painting, etching, and the award. I needed to quit while I was ahead! 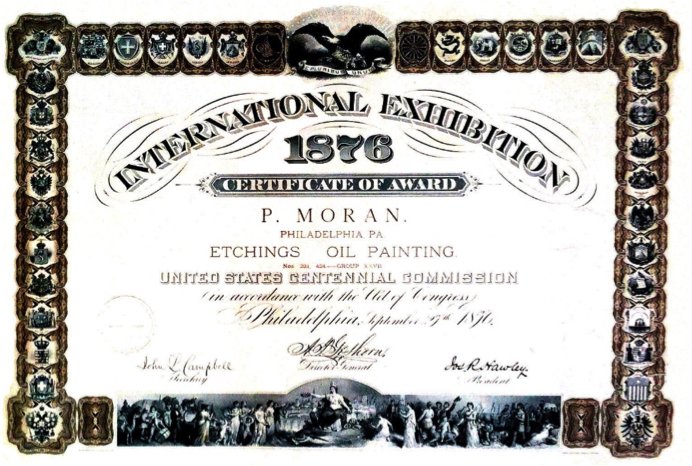 An architect by profession, David G. Wright, FAIA, has spent close to thirty years researching the lives and work of the American painter-etchers of the last third of the nineteenth century, a group of men and women who captivated the American art scene–and thrilled the American public–with evocative and stunning prints. He has written articles discussing the etchings of Robert Swain Gifford, Emily Kelley Moran, Mary Nimmo Moran, Thomas Moran, Stephen Parrish, and Stephen Ferris, to name but a few. In 2010 he published a two-volume work on Peter Moran, Domestic and Wild: Peter Moran’s Images of America, which received the Ewell L. Newman Book Award from the American Historical Print Collectors Society in 2011.