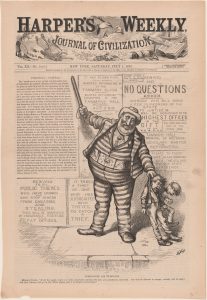 When we think of American political prints, many of us immediately visualize Thomas Nast’s savage cartoons in Harper’s Weekly as he famously went after the corruption of Tammany Hall and Boss Tweed in the early 1870s. But the tradition of using illustration to convey political messages stretches back to America’s origins.

Political art can communicate everything from mockery and resistance to hope and patriotism. The images are often embedded with themes of race, religion, gender, and class.

As we get close to November’s Election Day, we asked AHPCS members to share a few favorite historical American political prints.

Two prints shared by Robert Newman, AHPCS member since 1982 and president of the Old Print Shop: 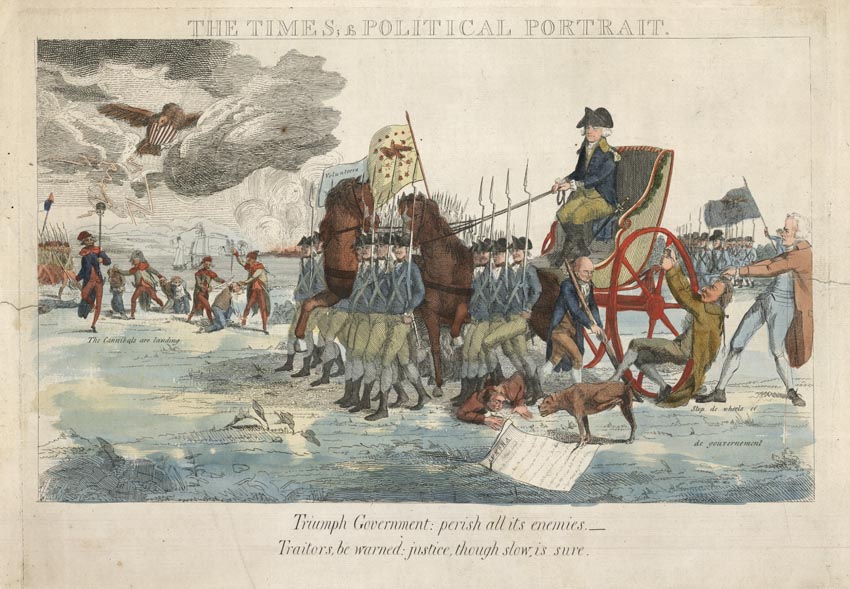 The Times, A Political Portrait. Triumph Government: perish all its enemies. Traitors, be warned: justice, though slow, is sure [Copper plate engraving with original handcoloring, image size 10 5/16 x 17 3/16″, circa 1798]. Courtesy of The Old Print Shop.

This is an extremely rare American imprint relating to the XYZ Affair, a diplomatic scandal that lasted from 1797 to 1800. Three French agents, originally publicly referred to as X, Y, and Z, demanded enormous concessions from the United States as a condition for continuing bilateral peace negotiations. This “affair” resulted in the limited, undeclared war known as the Quasi-War. The United States and French negotiators restored peace in 1800.

In this caricature, George Washington is shown riding in the Federal Chariot, a representation of the United States Government. He is being pulled by a team of horses and militiamen, shown here marching under a flag entitled “volunteers.” In the right background are additional  troops, who are marching under a flag entitled “Jersey.”  Three men, recognizable as Congressman Albert Gallatin, former French Ambassador Citizen Genêt, and Vice-President Thomas Jefferson, are shown attempting to “Stop de wheels of de gouvernement.” Being trampled on the ground is Benjamin Bache, a Jeffersonian journalist and editor of the Philadelphia Aurora. Further insulting Bache is a dog shown urinating on his newspaper. On the left are French troops shown killing and maiming, one of whom is shown dancing with a head on a pike. Below is the caption “The Cannibals are landing.” Above them is an image of the great seal of America, the “Shield & Eagle,” shooting lightning bolts towards them. 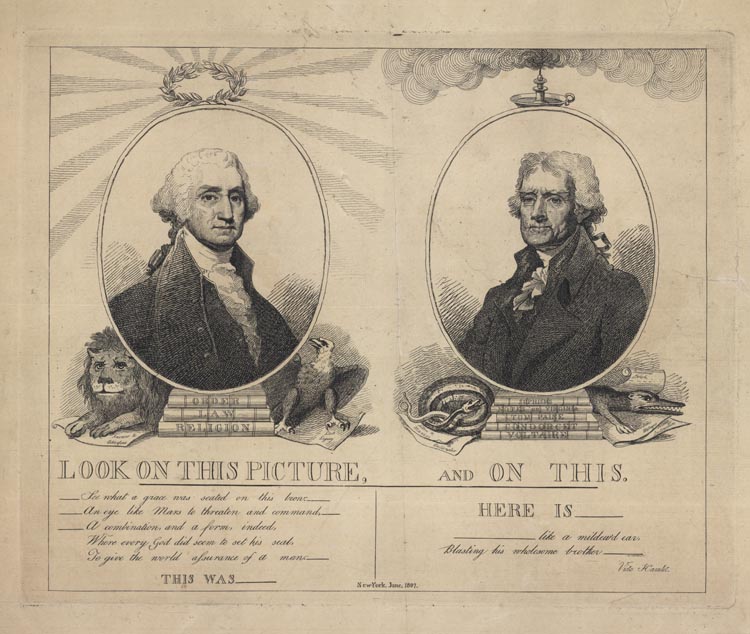 This is one of the earliest negative political items containing portraits of George Washington and Thomas Jefferson.

The title is taken from a line in Shakespeare’s Hamlet: “Look here, upon this picture, and on this.” When this image was produced, Jefferson was the seated president of the United States of America. Jefferson was seen as almost too scholarly at the time. He spoke five languages and was deeply engaged in the sciences.  He had been narrowly elected as the third President in 1800 and was re-elected in 1804. He ran on the Democratic-Republican ticket and was loathed by the other major party at the time, the Federalist Party.

Washington is flanked by a lion and eagle with a laurel wreath above. Jefferson is flanked by a snake and crocodile with a smudgy candle above. Washington’s portrait is propped up by three books labeled: Order, Law, and Religion. Jefferson’s books are labeled: Sophisms; Notes on Virginia; Tom Paine; Condorcet; and Voltaire.

Under Washington’s portrait below the title are the lines:

See what a grace was seated on this brow.
An eye like Mars to threaten and command,
A combination, and a form, indeed,
Where every God did seem to set his seal,
To give the world assurance of a man.
THIS WAS __

Below Jefferson’s portrait it reads:

HERE IS __
Like a mildew’d ear,
Blasting his wholesome brother
Vide Hamlet.

It is very likely that this image was produced to help sway the Presidential election of 1808 to the Federalist Party candidate Charles Cotesworth Pinckney. However, the election was won by Democrat-Republican James Madison. Fear of reprisals is likely why the engraver and artist left their names off the image, though we believe this is the work of Peter Maverick, Jr., who was working in New York.

A print shared by Michael Buehler, AHPCS member since 2006 and owner of Boston Rare Maps: 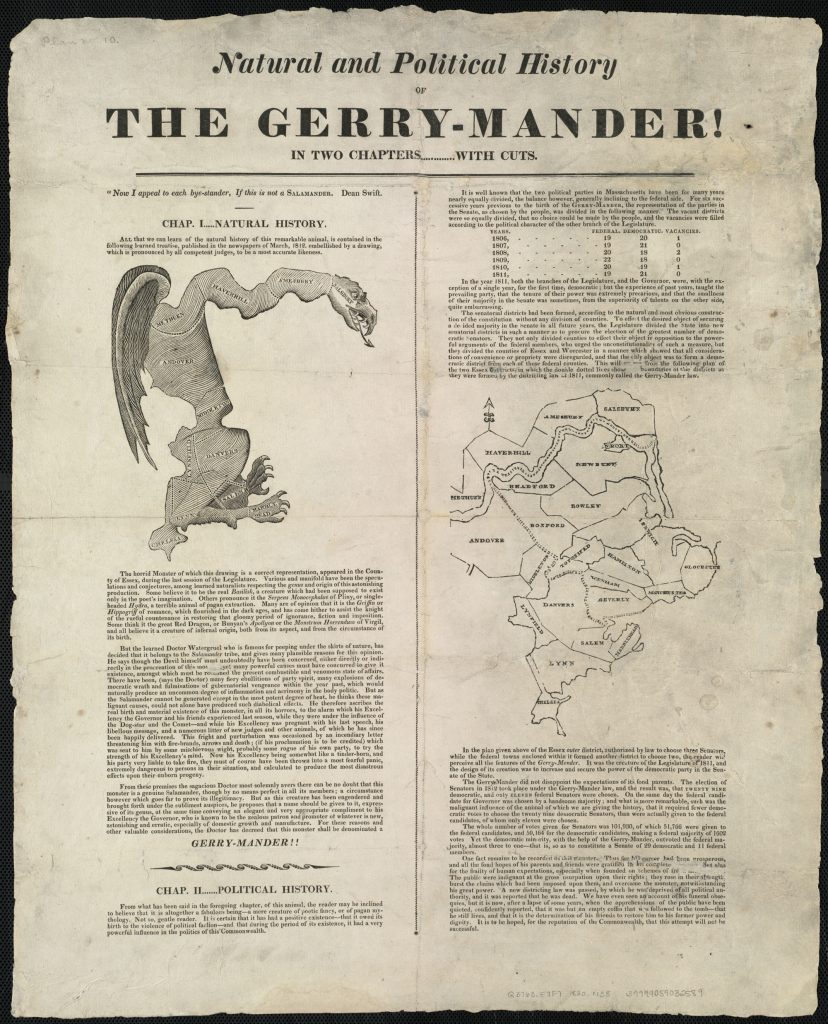 This rare broadside satirizes one of the most toxic yet enduring features of American politics. I love this print because of the brilliant design, the great backstory and, of course, its continued relevance to the American political scene.

In 1812 Massachusetts Republicans led by Governor Elbridge Gerry engineered a radical redistricting, designed to disadvantage the Federalist majority in the upcoming state senatorial elections. The legislation was enormously successful, and the Republicans’ majority grew even though the Federalists actually received more votes. On viewing a map of the redistricted Essex County, one wag—the painter Gilbert Stuart, some say—combined the governor’s name with that of the mythical beast, and so the “Gerrymander” was born. Soon after the first image of the Gerrymander appeared in print in the Boston Gazette.

This broadside was issued somewhat later, perhaps about 1820 or so, apparently on the occasion of another redistricting effort. The Gerrymander woodcut is almost identical to the one that appeared in 1812 and the first column of text is a reprint from the original Boston Gazette piece. The second column gives a “Political History” that may be original.

A print shared by Allison M. Stagg, AHPCS member since 2008 and author of the forthcoming book, Prints of a New Kind: Political Caricature in the United States, 1789-1828 (Penn State University Press): 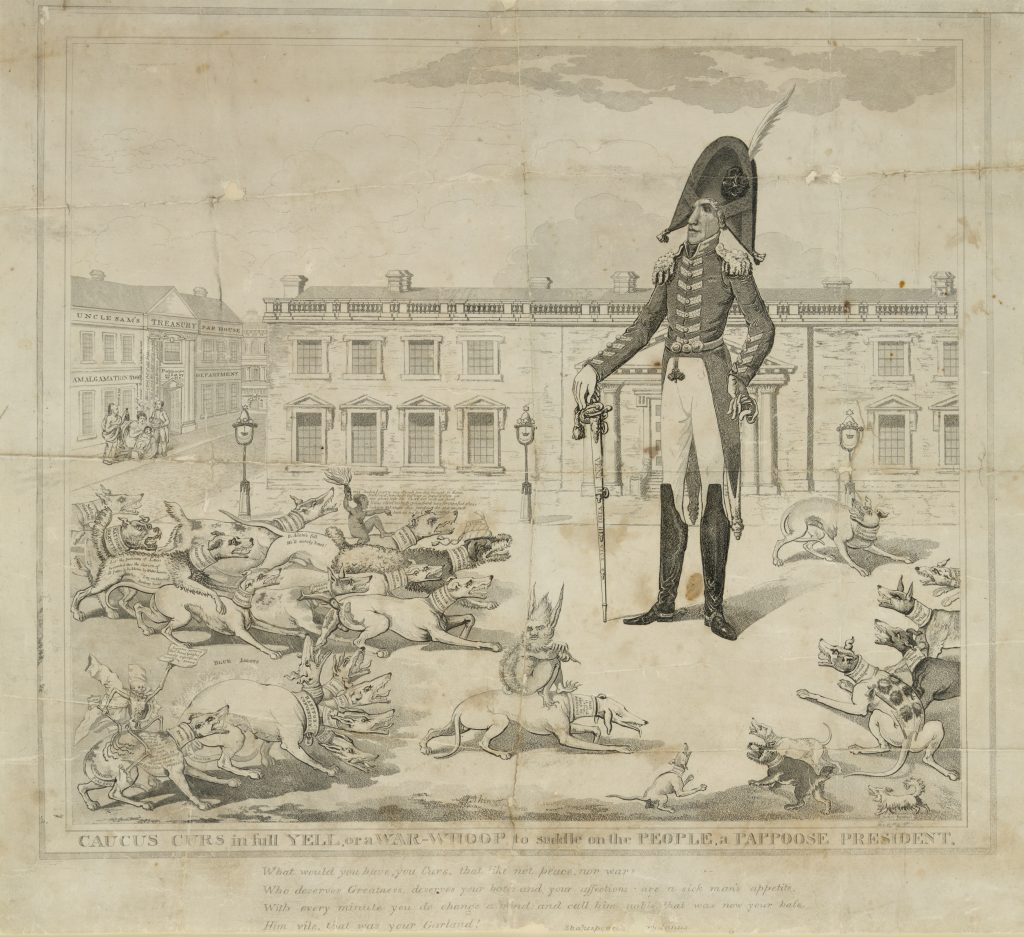 James Akin, Caucus Curs in full Yell, or a War-Whoop, to saddle on the People, a Pappoose President [Etching with aquatint and engraving, sheet 19 1/2 x 21 2/3″, 1824]. Courtesy of the Library of Congress.

This caricature print by James Akin, in support of Andrew Jackson’s 1824 presidential campaign, has long been a favorite of mine, although largely because of what the print represented to the artist.

James Akin was one of the first artists to work primarily in caricature in the United States, and he saw the 1824 election as an opportunity to gain patronage by Jackson. Although Jackson lost the race in 1824 to John Quincy Adams, he was elected as the 7th President in 1828 and this is when Akin attempted to use the success of this print as a means to obtain a position in the Jackson administration. Letters and petitions were addressed to both Jackson and his Vice President Martin Van Buren requesting consideration. Akin campaigned for this: letters of support came from wealthy and important Philadelphia citizens while the petitions were signed by some of the most important artists and engravers of the period, including Bass Otis, Thomas Birch, and David Edwin. Akin did not receive a position, and he quickly reversed his stance on Jackson, who became one of his most favorite subjects to portray negatively in caricature throughout the 1830s.

Interested in viewing more political cartoons? Visit some of these great digital collections!

American Cartoon Prints from the Library of Congress

Political Cartoons from the Library and Archives of Canada

Political Cartoons Collection at the Library Company of Philadelphia