October 6, 2020, was the bicentennial of the birthday of Jenny Lind—one of the most famous women of the 19th century.

Born in Stockholm in 1820, Lind entered the Swedish Royal Theater School in 1830—the youngest student ever accepted. By 18, her voice had made her famous in Sweden, and during the 1840s she created a frenzy across Europe giving concerts to sellout crowds. Her reputation crossed the Atlantic. In 1845, American newspapers began printing short notices about the “celebrated songstress Jenny Lind,” and soon her name was listed on sheet music titles pages and also used to promote a variety of goods (Fig. 2). A “Jenny Lind Ice Cream Saloon” even opened in New Orleans, Louisiana, in 1848.

Lind’s name may have gained some footing in America, but it was nothing compared to what would happen when the notorious showman P.T. Barnum brought the “Swedish Nightingale” herself to the United States. For a hefty sum, Lind signed a contract in January 1850 to sing in 150 concerts for Barnum within a year to eighteen months of arriving in New York.

Lind was set to arrive in September, leaving Barnum, an expert promoter, eight months to start a publicity wildfire around the upcoming tour. His main medium was newspapers, and a biographer reported that “At one time he had no less than twenty-six private newspaper reporters in his employ.”

But newsprint only went so far. Barnum later remembered, “The people soon began to talk about Jenny Lind, and I was particularly anxious to obtain a good portrait of her.”

Luckily for Barnum, a stranger identifying himself as a Swedish artist soon appeared in his office eager to sell an oil painting of Lind for fifty dollars (approximately $1650 in today’s money). Barnum purchased the piece, only to learn later that same day “that it was a cheap lithograph pasted on a tin back, neatly varnished, and made to appear like a fine oil painting to a novice in the arts like myself. The intrinsic value of the picture did not exceed thirty-seven and a half cents!”

Barnum’s desire to show Jenny Lind to the American public must have clouded his common sense. Thanks to the advent of lithography decades earlier, Americans expected (and enthusiastically purchased) inexpensive, mass-produced prints and sheet music emblazoned with portraits of celebrities of the day. Lithography reproduced drawings, though—it was not a photographic method. Which meant the printmakers needed some sort of source material to accurately depict a person. The other option was artistic license.

Beautiful Austrian ballerina Fanny Elssler (1810-1884) was something of a precursor to Lind when she arrived in New York in 1840 for a well-publicized tour. When printmakers didn’t know the specific details of Elssler’s face they pulled from several iconic details—her dances, roles, costumes, hair—to successfully communicate their subject.

Especially in the early days when most American artists had little idea what Lind looked like, prints and sheet music covers often depicted her in a style similar to Elssler, relying on costume, hair design, and (of course) a printed name in place of accuracy.

The problem with Jenny Lind was that she was a different sort of celebrity. In 1849, she “retired” from operatic performances, which diminished the opportunity to connect her to particular roles. She also didn’t fit the mold of a typical headliner.

Journalists regularly noted that Lind’s physical appearance wasn’t the reason for her popularity: “It is not for her beauty; for in this respect she does not equal many other women who have been before the people … It is her high moral character—her spotless name, which the breath of slander has never tainted—her benevolence—her charity—her amiable temper—her religious sentiment which she so carefully cultivates … Take her moral and intellectual qualities with her originality of vocal power, and we shall probably ‘never look upon her like again'” (The New York Herald, September 6, 1850).

Barnum’s ventures had always relied on the promise of spectacle: a 3-foot tall man, a 161-year old woman, a mermaid. For Lind, Barnum was prepping the American public to clamor for a plain, modest, seemingly near-angelic songstress. But wholesomeness isn’t a spectacle easily depicted in images. For this sort of persona, only an authentic likeness would suffice, and for that artists needed reliable source material.

Prior to Lind’s arrival in New York, two paintings by German artists from the mid-1840s were most often credited as the source of portrait prints: one by Edward Magnus (Fig. 9) and one by Conrad L’Allemand (Fig. 10). 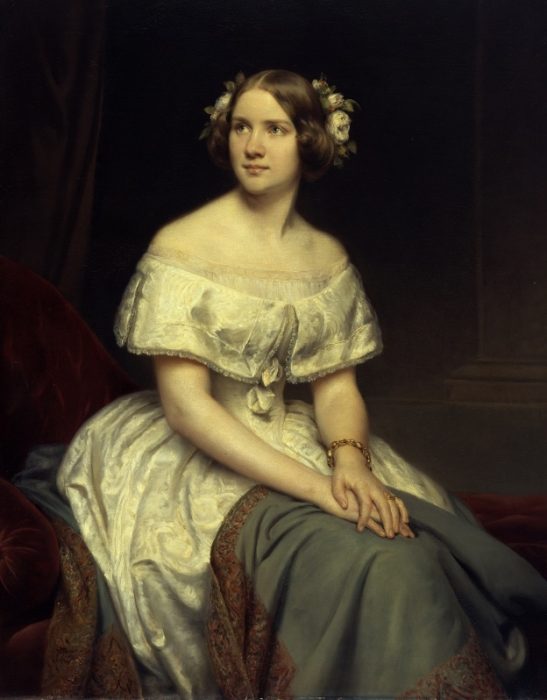 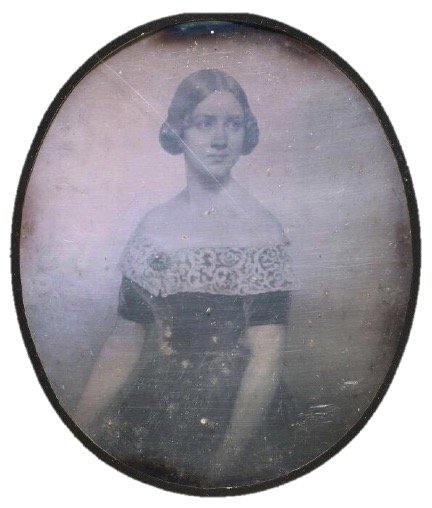 These two portraits (or derivatives of these) became the obvious inspiration for a mountain of lithographic and engraved prints. Even in the cases where the print didn’t credit the painting, it is usually easy enough to spot the similarities.

As late as September 4, 1850, the New York Tribune reported on “a very handsome lithograph” just received from lithographer Napoleon Sarony containing vignette portraits of Lind along with her accompanists, conductor and pianist Julius Benedict and baritone singer Giovanni Belletti. The newspaper assessed that “the portrait of Jenny Lind though rather youthful, is the best we have seen.” It, too, relied on Magnus’s painting.

An artist’s copy of another artist’s depiction was the best American printmakers could do while they waited for Lind to arrive. Commercial photography did exist in 1850 in the form of the daguerreotype, but it had significant limitations. The process could create only one unique image at a time on a silvered copper plate. There was no negative. That meant that if sitters wanted five images of themselves, they had to sit before the camera for five separate exposures. If they wanted a copy of one specific photograph, the only means of reproduction was to take another daguerreotype of that photograph. It would not be until later in the decade that technology advanced enough to allow for easy photographic duplication by means of a glass plate negative that could be printed multiple times on light-sensitive paper.

Barnum’s promotion between January and September 1850 worked. A crowd estimated at more than 30,000 showed up at the docks on September 1st to catch a glimpse of Lind as she took her first steps on American soil. And it is telling that almost immediately upon arriving in New York, Lind sat for a number of daguerreotype portraits. By September 14th, she was being photographed in Mathew Brady’s Portrait Studio (Fig. 20).

Lithographic prints based on the Brady photograph were hurriedly created. It was all front-page news. The New York Tribune reported on the 26th that eight pictures were taken; two were exhibited in Brady’s gallery and “one of them which now lies before us, lithographed by D’Avignon, is an exact type of her face in repose, and so far, is the only engraving we have seen which conveys a just impression of her face” (Fig. 21). Other printmakers would soon follow with their own renditions of the Brady image.

Brady’s Studio wasn’t the only stop Lind made. Newspapers spoke favorably about the daguerreotype taken in the New York City studio of brothers Marcus and Samuel Root (Fig. 22). On September 27, 1850, the New York Tribune reported that one print publisher was working on a “magnificent portrait of Jenny Lind taken from Root’s superb daguerreotype.” The print was advertised at $2 or $4 colored. In November, the public was invited to the Roots’s studio “to call and see the best Daguerreotype ever taken on Jenny Lind” (New York Tribune, November 8, 1850).

The irony was that even with the existence of photography in 1850, a photographed face still had to be channeled through an artist’s hand to create a mass-produced portrait. The practice remained the same as before, except instead of working from a painting (like that by Magnus or L’Allemand), an artist could create a likeness from a daguerreotype.

The images above emphasize that artists brought varying skill levels to their work. Certainly, the results were better when they worked from a daguerreotype rather than a copy of a painting. In many cases, of course, printmakers didn’t have access to either a daguerreotype or a painting, so they copied prints of the originals (or even copies of copies), which added additional layers of separation between the sitter and the portrait print.

Newspapers were always willing to assess how well the artist fared. The New York Tribune described a Lind portrait print that one pen manufacturer presented to his customers: “It is evidently copied from a daguerreotype, and gives the features with tolerable correctness, without their expression” (Sept. 4, 1850).

Critics identified both the photographer and lithographer as artists who either succeeded or failed at accurately “capturing” not only Lind’s facial features but her spirit as well. The language of critique used for both prints and daguerreotypes was not that of a documentary medium but of an art form.

The sheer variety of engraved and lithographic portraits of Lind remains as evidence of her popularity in the United States. Barnum achieved his goal. For her part, Lind returned to Europe in 1852 having received over $175,000 (more than $5 million today) from her North American tour.

Fig. 3. J. Bouvier, Fanny Elssler (fac. sig.): In the Cracovienne Dance, in the Ballet of The Gipsey [Lithograph, 1839]. Courtesy of the New York Public Library. Return to print.

Fig. 18. Burt (engraver) after painting by L’Allemand, Jenny Lind [Engraved frontispiece to Jenny Lind: Her Life, Her Struggles, and Her Triumphs by C. G. Rosenberg, 1850]. Courtesy of Harvard University through the HathiTrust. Return to print.

Fig. 21. F. D’Avignon from a daguerreotype by Brady, Jenny Lind [Lithograph, 1850]. Courtesy of the Library of Congress. Return to print.