A collector recently queried us about a print she had of “Little Fannie” published by Currier & Ives. The collector wanted to know: Was this a famous child? How had Fannie ended up immortalized in a print? Who was Fannie? 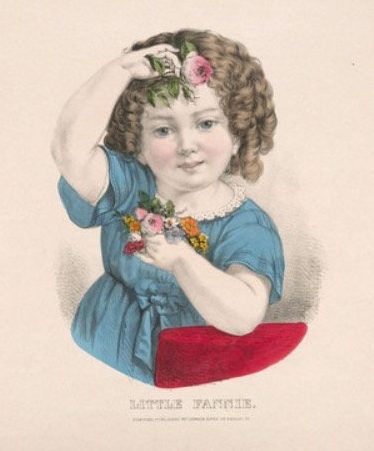 The truth is that Little Fannie could have easily have been Little Mary or Little Kate. Her picture falls into a genre known as “juvenile prints”—a large group of small-folio prints (usually 8 x 12.5 inches) of posed girls and, to a lesser extent, boys. While some were given broad titles like Little Sweetheart or Little Brother, many were titled with a specific first name. 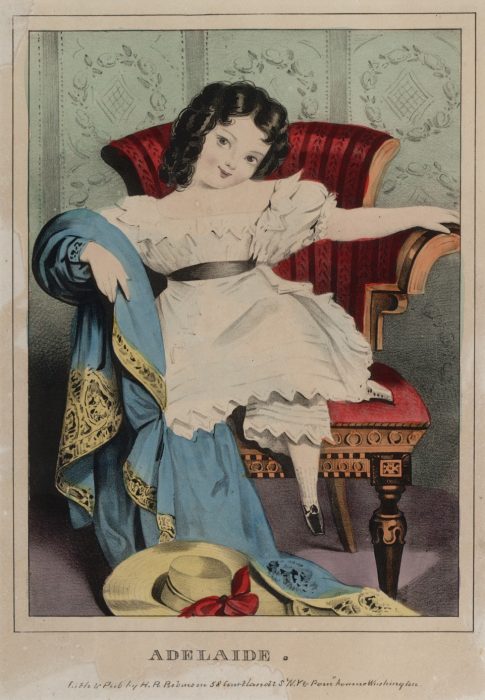 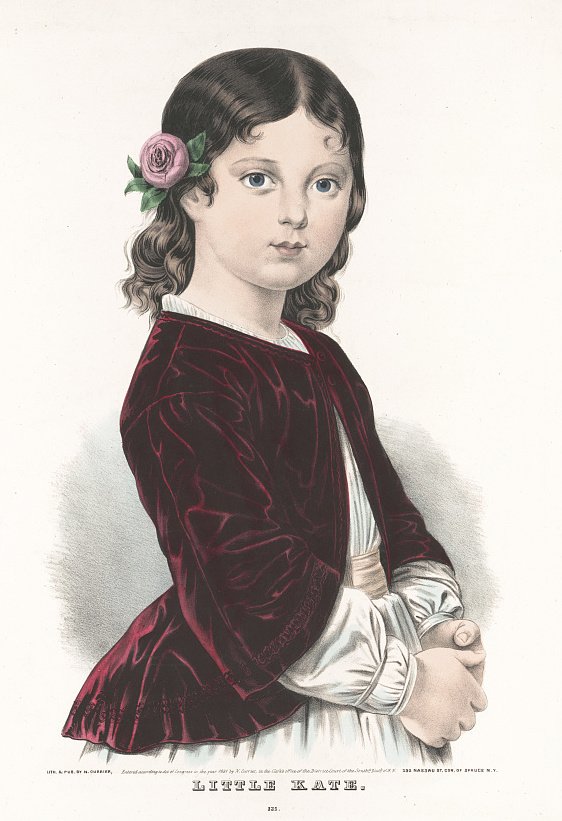 N. Currier, Little Kate [Lithograph, circa 1851]. Courtesy of the Library of Congress. 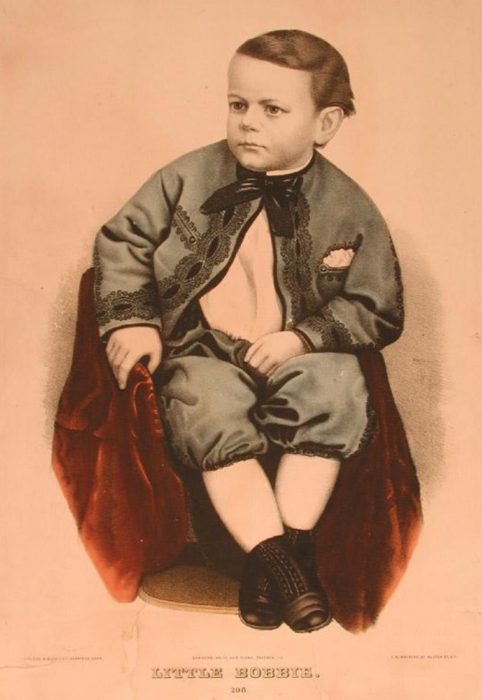 These prints were most popular in the 1840s and 1850s when the average American could little afford to have a portrait of their child painted or even photographed. Small-folio lithographs typically cost between 10 and 25 cents each. Daguerreotypes, made using a popular photographic process of the time, were more costly. In the early 1850s, newspaper advertisements promoted “daguerreotype likenesses” for 50 cents or more. 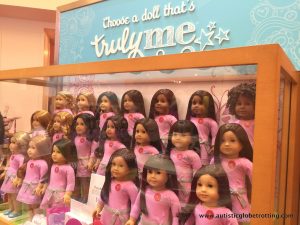 There were many unusual first names given to children in Victorian America, but the juvenile print titles are common ones. These names might be better understood as similar to the miniature license plates one finds in highway convenience stores engraved with hundreds of different names or even the “Truly Me” dolls from the American Girl company. The publishing houses didn’t want potential consumers wondering who the posed Fannie was–they wanted them thinking about their own Fannie or Mary or Kate.

In the mid-1800s, a number of lithography firms took advantage of a ready market desiring personalized prints, as well as a culture that sentimentalized and idealized childhood. In particular, N. Currier (and later Currier & Ives) in New York City and the Kelloggs of Hartford, Connecticut, published many of these prints. 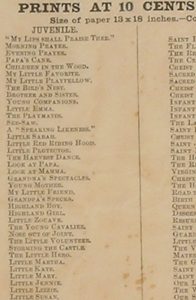 For a 2009 Imprint article, collectors James Brust and John Zak explored which Currier & Ives prints were most popular in the 19th century. They noted that while the most desirable (and expensive) prints among modern collectors are steamboat, railroad, and winter scenes, the ones more commonly found for sale on eBay and in antique stores are juvenile, sentimental, and religious themes. They asked, “Does that mean these were leading sellers in their day, or do they simply accumulate in the marketplace because they are not popular with modern collectors and hence are not purchased?”

The article reviewed Currier & Ives sales catalogs dating from the late 1850s to the early 1880s to gauge which broad subjects appeared most frequently. Among five different catalogs, each listing between about 500 to 1200 small-folio prints, juvenile themes consistently accounted for between 11 and 14% of the total titles.

One interesting feature of these prints, noted by Brust and Zak, is their variety: “It would have been possible for Currier & Ives to create four or five generic pictures, vary them further with different hair coloring, then issue multiple versions of each with different names printed in the title. This would have left one family’s Mary looking like the next one’s Jane, but enabled buyers to find the name they needed for their child or loved one. But virtually each title is a distinct image, despite the fact that today’s collector likely sees little difference between the numerous portraits of pretty women and children.”

While discussing a similar type of print of stylish young women issued by these same lithographic firms, costume and textile historian Lynne Zacek Bassett writes in Picturing Victorian America, “Lithographs such as Emeline, Eliza, and Lucina served as fashion plates for the style-conscious American Woman.” Given the similar attention paid to clothing, accessories, and hairstyles in the prints of children, it’s possible that the juvenile portraits played a similar role. If this was the case, then it also explains why there would be such variety; the prints would require regular updating to keep up with the newest style trends of the moment. 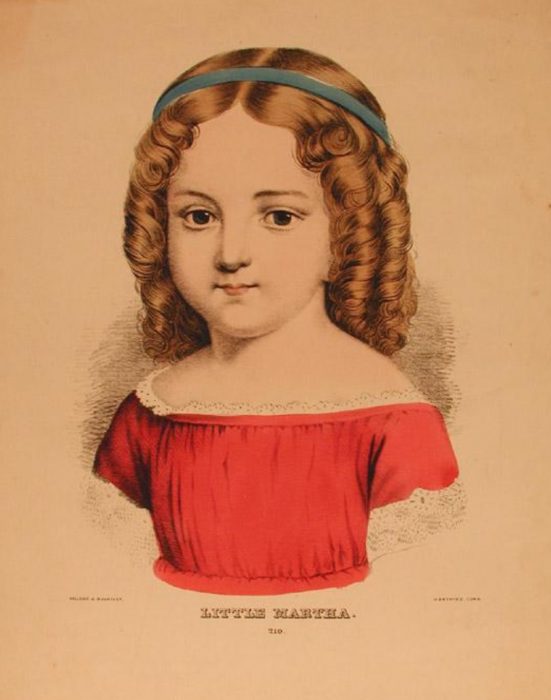 One of the reasons our querier asked about Little Fannie is that her print had a handwritten note on the back from a relative about a family member named “Fannie.” A print held by the Connecticut Historical Society of “Little Minnie” includes a faded handwritten inscription below the title: “Presented to Minnie …” from her teacher. Both of these examples, coupled with the sheer number produced, reflect that these prints must have been appealing (and inexpensive) personalized gifts in the 19th century. 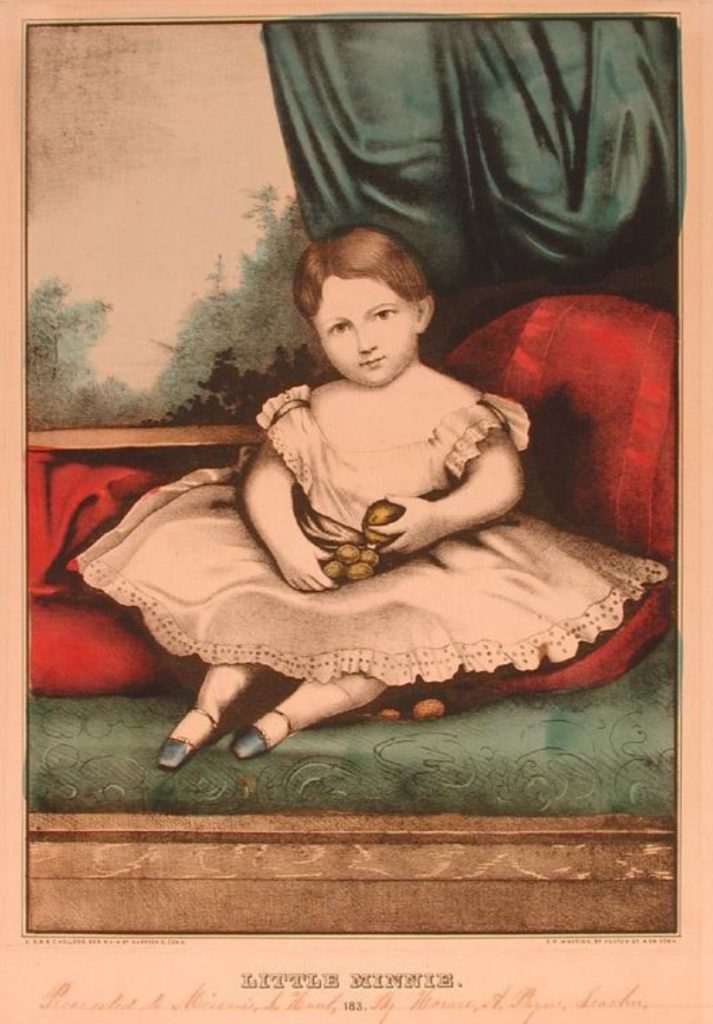 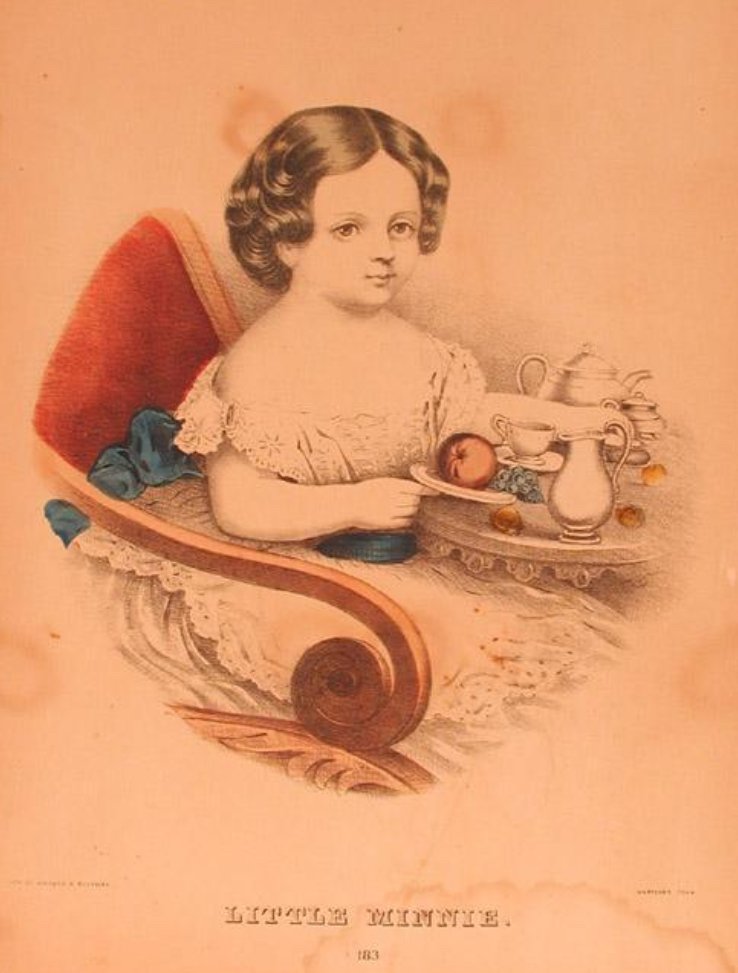 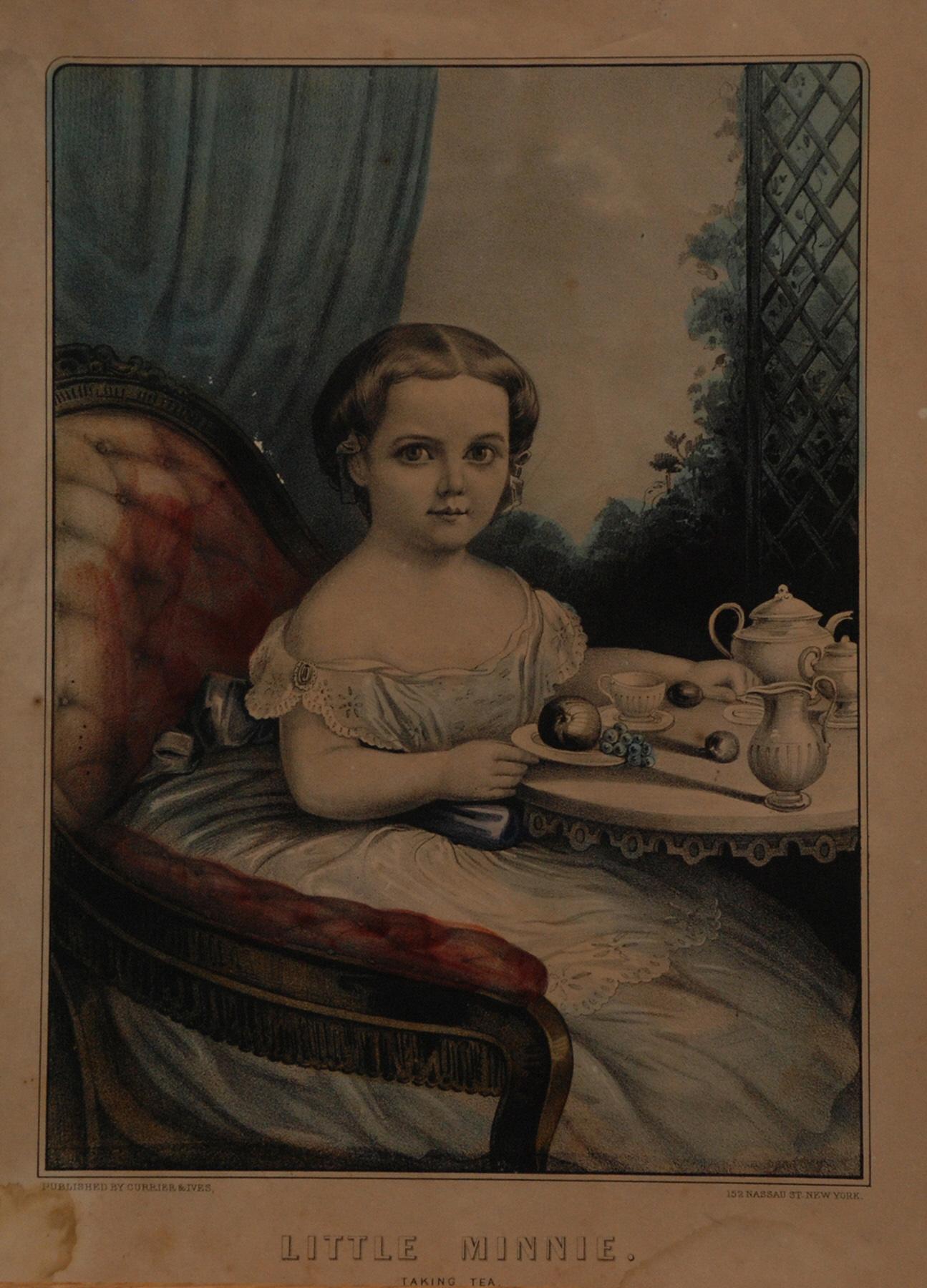 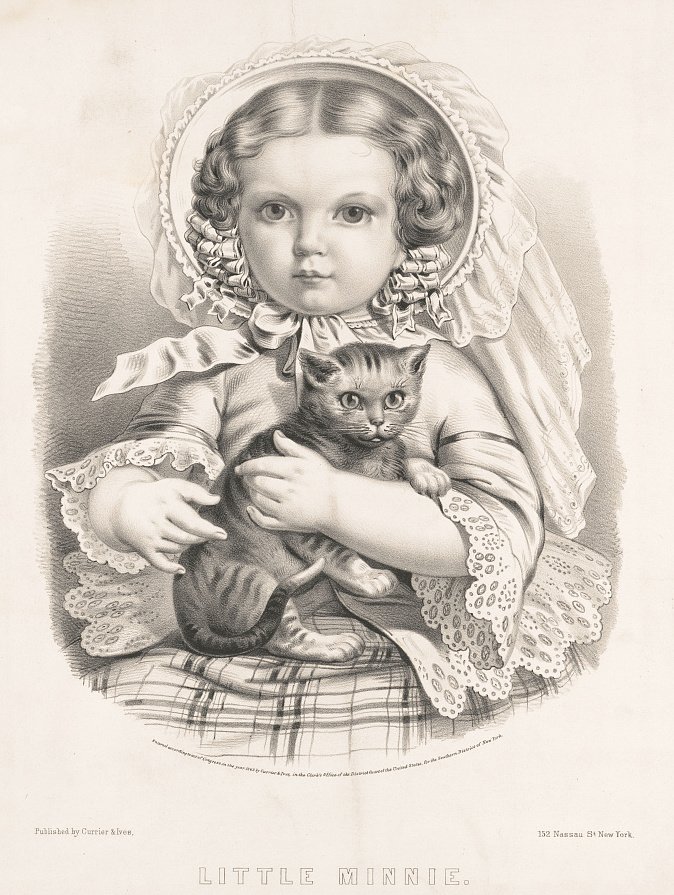 Currier & Ives, Little Minnie [Lithograph, circa 1862]. Courtesy of the Library of Congress.