Henry Farrer (1844-1903) was one of the most celebrated of the American painter-etchers during the late 19th century, and someone who today is far too underappreciated. He held leadership positions in the New York Etching Club, which became one of the prime movers in generating interest in etching within the American public for the majority of its existence. Farrer served as president for over twelve years, from 1881 to early 1894, when the club ceased to function. During the same time, he served as secretary of the American Water Color Society and achieved tremendous accolades for his work in that medium as well as in etching.

Henry Farrer was born in London, England, in 1844, and he immigrated to New York City in 1863. To date, Farrer’s Old New York series of fifteen views of historic buildings and locations in and around Manhattan, etched between 1870 and 1877, are considered to be his earliest etchings.

Farrer’s Tree Study (Fig. 1) may be an even earlier etching, dating from about 1870. This print, now in a private collection, had previously been sold by the Kennedy Galleries of New York City to a longtime print dealer. Tree Study clearly shows Farrer’s pre-Raphaelite roots and stylistically foreshadows his Old New York series. It predates the huge interest in etchings that developed within the United States—well before the formation of the New York Etching Club in 1877. 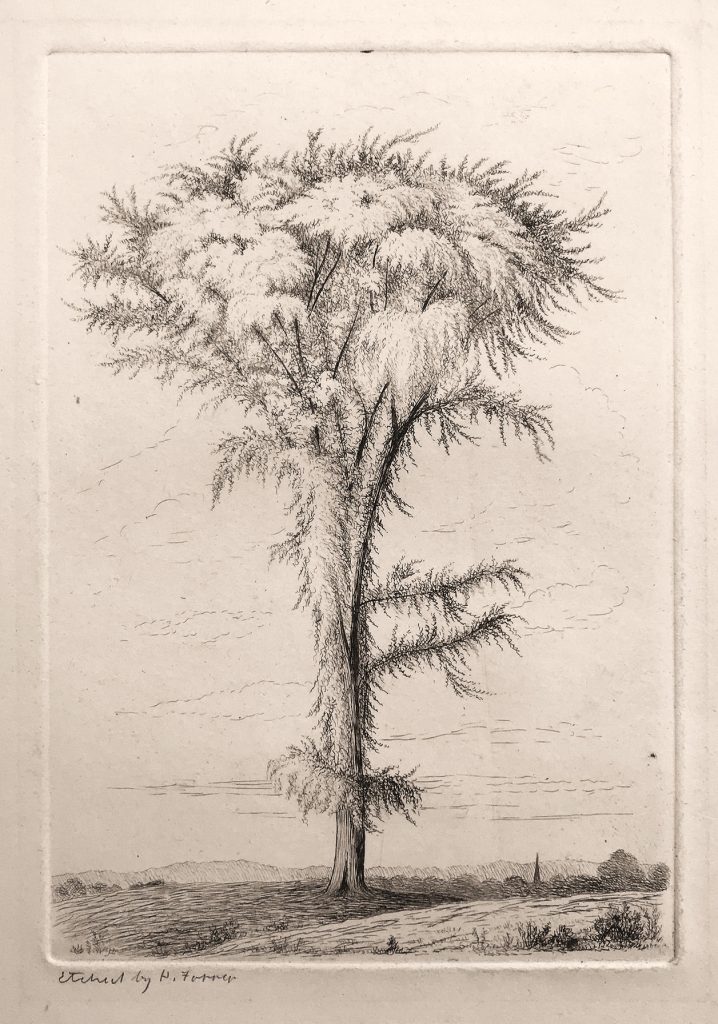 Farrer’s attention-to-detail when studying trees—their overall shape, the branching structure, the arrangement of limbs, and the way that the foliage emerged from the branches—lasted throughout his entire artistic life as a focused fascination. This study represents one of his earliest etched attempts at such documentation. The variety of tree recorded here may have been the black locust (Robinia pseudoacacia) captured during its blooming season.

Fig. 2. Views of the black locust. Left: Flower cluster. Center: Lower tree formation with an open side branch and tree in bloom. Right: Character and pattern of bark and leaf formation.

This would explain the otherwise somewhat curious “whipped cream” splotches seen in the upper branches. Farrer provided no clues as to the scale of the tree, other than what might be an indistinct and minuscule church tower seen off to the distant right. The very low ground plane and horizon line, as well as the large expanse of sky, created the sense of an immense tree dominating an open countryside. Another early undated etching by Farrer, a fine study of a tree titled Pelham Bay (Fig. 3), warrants comparison. 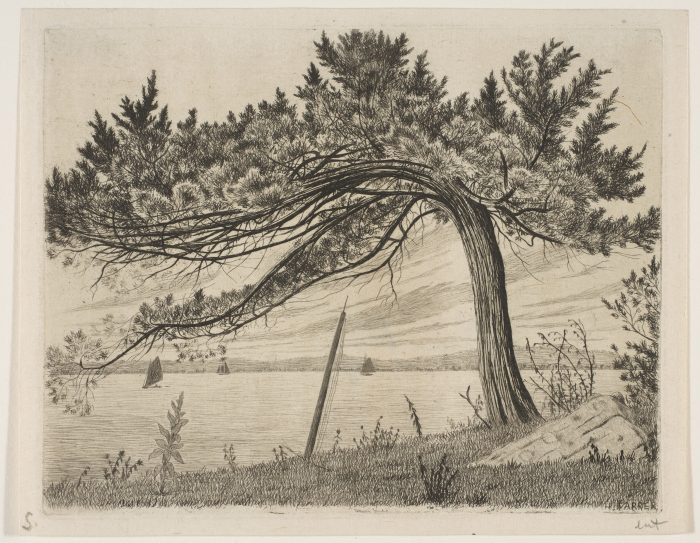 Examples of Farrer’s studies that focused on trees abound. An undated watercolor (Fig. 4) undoubtedly done during this same early period, shows a tall, lone tree with a scale and perspective similar to that found in the etching. 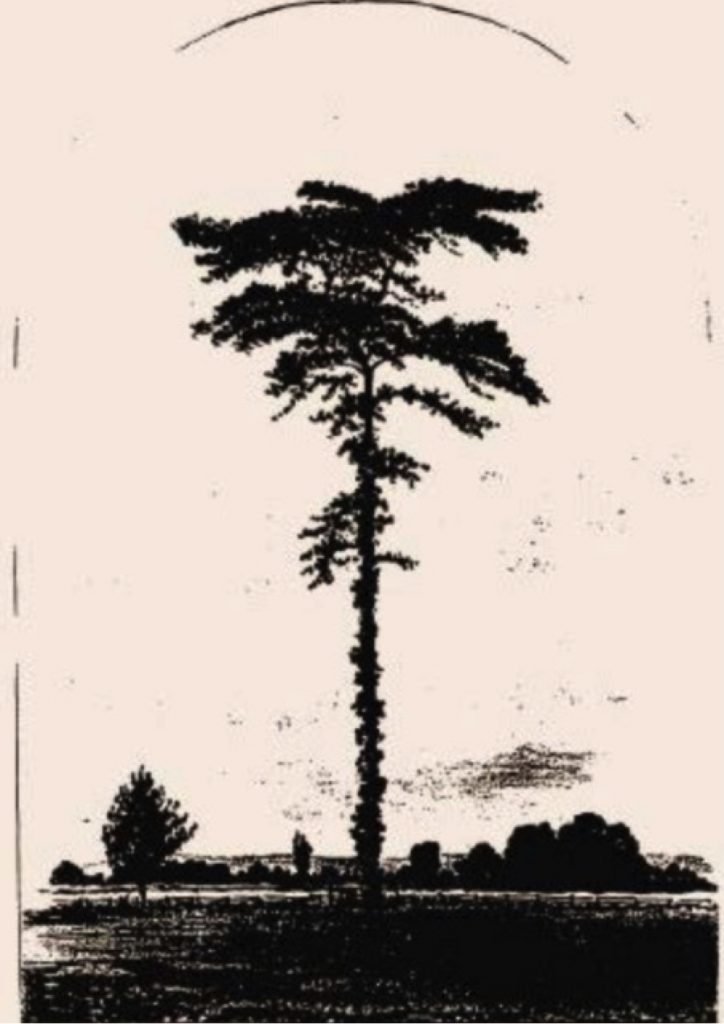 Three pencil sketches, Figs. 5-7, all undated, may be studies at different seasons of the same type of tree depicted in this etching. The branch, leaf, and upper floral arrangement and treatment are all sympathetic.

The circa 1870 date for the etching is conjecture, but the artistic style in the work places it within Farrer’s earliest period, when he maintained a strong reliance on the Pre-Raphaelite doctrines. Pre-Raphaelite doctrines became popular thanks in large part to British art critic, author, and lecturer John Ruskin (1819-1900) and his five-volume Modern Painters series, written in the 1840s and 1850s. Ruskin advocated the need for artists to study Nature diligently, to work close-up and in detail, and not to editorialize on or adjust how Nature presented things.

Farrer’s attempt at etching began in 1869 and this work must date to shortly thereafter. The plate has no date or signature, but the pencil signature definitely appears to be in Farrer’s hand, comparing it to an 1870 dated signature (Fig. 8).

It may seem a bit strange that the etcher would add the phrase “Etched by” before his signature. Only one other example, a print from his Pelham Bay etching, has been seen that included such a qualifier.* Today, when we encounter such an attribution, it might signal that someone other than the original artist signed the piece, perhaps to help future viewers understand the work’s authorship. Or in some cases, such signatures point toward a misguided forging effort to increase the work’s value. In this case, however, since the handwriting matches so well Farrer’s authentic script, other possibilities need to be considered.

Perhaps Farrer felt that this etching— being one of his earliest and done c1870—needed the “etched by” qualifier in order to help the viewer understand what the medium actually was. In 1870, the American public had an extremely limited understanding of the process. At this early date, only a handful of artists in America understood or actively practiced etching. Of note, Farrer’s early studio neighbor, R. Swain Gifford, actually signed his 1868 etching of Storm Beaten Cedars on Martha’s Vineyard, in the plate, lower center, “Drawn and etched by R. Swain Gifford” (Fig. 9), which may have prompted Farrer’s pencil notation of several years later. 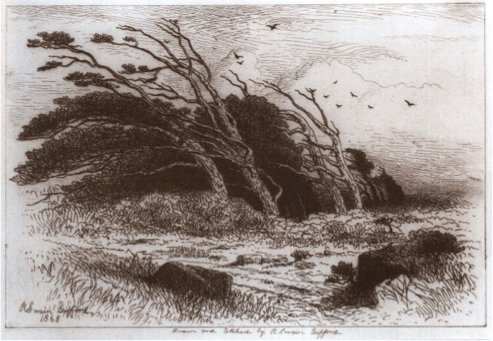 Another anomaly with this early etching concerns the lack of an open bottom margin (Fig. 10)—an area free of etched line within the plate—something that Farrer included in almost all of his earliest etchings.

Most likely he created this work before he established that convention. Alternatively, but less likely, the date of this etching could be later—as late as 1877—when he entered into a transition phase with some of his etchings continuing to include the blank bottom margin, and others abandoning it.

In 1879, Farrer provided a list of his early etchings to Sylvester R. Koehler, who published a record of his most significant etchings to that time in the American Art Review (December 1879). That list did not include this example. The etching is rare and seen in only one private collection.

An architect by profession, David G. Wright, FAIA, has spent close to thirty years researching the lives and work of the American painter-etchers of the last third of the nineteenth century, a group of men and women who captivated the American art scene–and thrilled the American public–with evocative and stunning prints. He has written articles discussing the etchings of Robert Swain Gifford, Emily Kelley Moran, Mary Nimmo Moran, Thomas Moran, Stephen Parrish, and Stephen Ferris, to name but a few. In 2010 he published a two-volume work on Peter Moran, Domestic and Wild: Peter Moran’s Images of America, which received the Ewell L. Newman Book Award from the American Historical Print Collectors Society in 2011. For the past decade, he has been studying the life and work of Henry Farrer and recently completed a 150-page in-depth discussion of Farrer’s early etchings.