It was October 8, 1974, though at the time I made no special effort to remember the date. Driving up the coast of Maine at the start of an autumn trip through New England, I stopped at a cluttered, musty antique barn. Having grown up in New York City, I was familiar with “Currier & Ives” images through their frequent use on Christmas cards, calendars, advertisements and ceramic ware. But it was only a couple of years before that I’d picked up a book and learned that Currier & Ives were actually two men, not a generic term. They had run a very successful printmaking business a hundred years and more before, producing hand-colored lithographs with a wide range of images so popular they were still commonly seen. And most exciting, those original prints were still available. Somewhere I had read an article telling how to differentiate original C&I prints from later reproductions, and it came to mind as I noticed framed prints hanging on the wooden walls. Suddenly more interested, I saw many carried the words “Currier & Ives” and seemed to be the real thing. 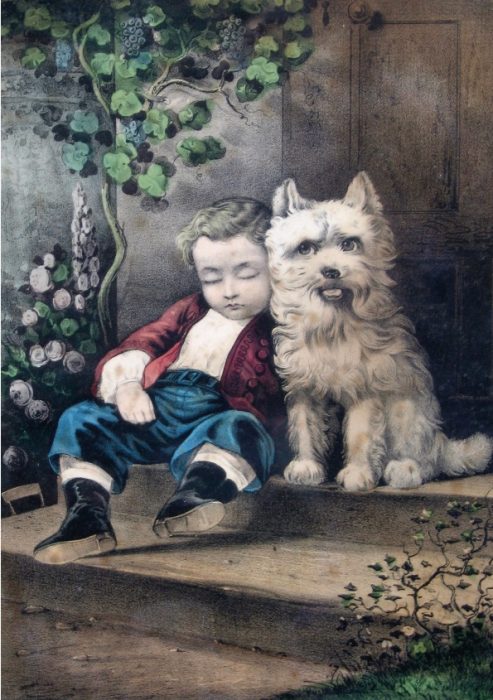 I was drawn to a charming picture of a beautiful sleeping child sitting next to an oversized, vigilant, obviously loyal terrier—The Watchers. The frame was literally falling apart, the glass gone, the print stained and damaged—none of which bothered me at all. I asked the price, and was surprised to learn it was only fifteen dollars. “But it is undoubtedly an original Currier & Ives,” I pontificated. Of course it was also a wreck, but I had yet to learn how much that affected value. The dealer just smiled and said nothing. I happily paid him and bounced out of the shop, certain that I had gotten a great bargain.

Another two days down the road found me in New Hampshire, at the shop of a quiet, neatly groomed, older woman. She had a room with prints hung floor to ceiling. I went wild and picked out an American Homestead Spring marked sixty-five dollars, with a tear half way through the image.

“Do you collect Currier & Ives?” she asked with the measured tones of a true New Englander. Suddenly flushed with pride at the realization, I replied, “I now have two so that must mean I’m a collector.” “Well,” she said, pausing a moment for emphasis, “If you’re going to collect Currier & Ives, you’ve better have a lot of money.” Not the most supportive statement, but an unexplainable yet powerful affinity for these prints had already taken hold in this neophyte.

Another two days, another state (Vermont), another antique barn and another forty dollars bought my third Currier & Ives – The Roadside Mill – also in terrible condition. I headed back to NYC to visit my family before returning to California, anxious to show off my three treasures. My father and sister, out of respect for my obvious enthusiasm, said nothing negative, though it was simple to see from the looks they gave each other that they thought I was nuts. But the hook was now set, and nothing was going to curb my newfound passion. I reached for the Manhattan Yellow Pages, and found an establishment called The Old Print Shop, which happily was within walking distance. I telephoned and naively asked: “Do you have any Currier & Ives prints?” With the verbal equivalent of a straight face, I was politely told they did.

Walking into OPS a short white later, I realized there would be far greater heights to Currier & Ives collecting. Large, beautiful prints, which were not all torn to shreds. And, of course, prices ten or even a hundred times higher than those in musty barns. But I’d been warned (“if you’re going to collect Currier & Ives, you’d better have a lot of money”), and was undeterred. Prints of this caliber would have to wait for another day, but I knew that day would come.

Returning to California, I read more on C&I, corresponded with dealers, and soon joined a fledgling group called the American Historical Print Collectors Society. Forty years have now gone by, and that compelling attraction to these prints has never slackened. There is no doubt the events of that long-ago autumn immeasurably changed my life for the better.

And what became of those fateful first three purchases? Once I’d become a little more grounded in the importance of condition, numbers two and three were quickly sold. But not The Watchers. After all, it was my very first Currier & Ives print, and of great symbolic importance to me, so I plan never to part with it. The image remains charming, and I never tire of it. And since it was so beat up to start with, I was not worried about hanging it in less than ideal conditions. I hope readers won’t consider this an “overshare,” but it hangs over the toilet in our bathroom, where nature’s necessary activities lead me to look at it several times a day.

On October 8, 1974, I had gotten a great bargain. Not financially as I thought at the time – most collectors would never buy a print in such poor condition, and I understand why the dealer was pleased to get anyone to give him fifteen dollars for it. But that first Currier & Ives, and all that has flowed from it, has enriched me in ways I could never have dreamed of at the time. It may well be the best fifteen dollars I have ever spent.

This article first appeared in the Fall 2014 AHPCS News Letter.