Invisible enemies have long been an elusive subject to illustrate. But throughout print history, artists have tried their hand at capturing various angles of disease. When epidemics strike, we can try to pull back into our own print collections to see examples of medical prints, diagnostic illustrations, maps and surveys used as tracing tools, and even representational satirical images. However with American prints, there are few “medical images of any kind from around 1750 until the mid-nineteenth century. Not even of something as common as bleeding.”1 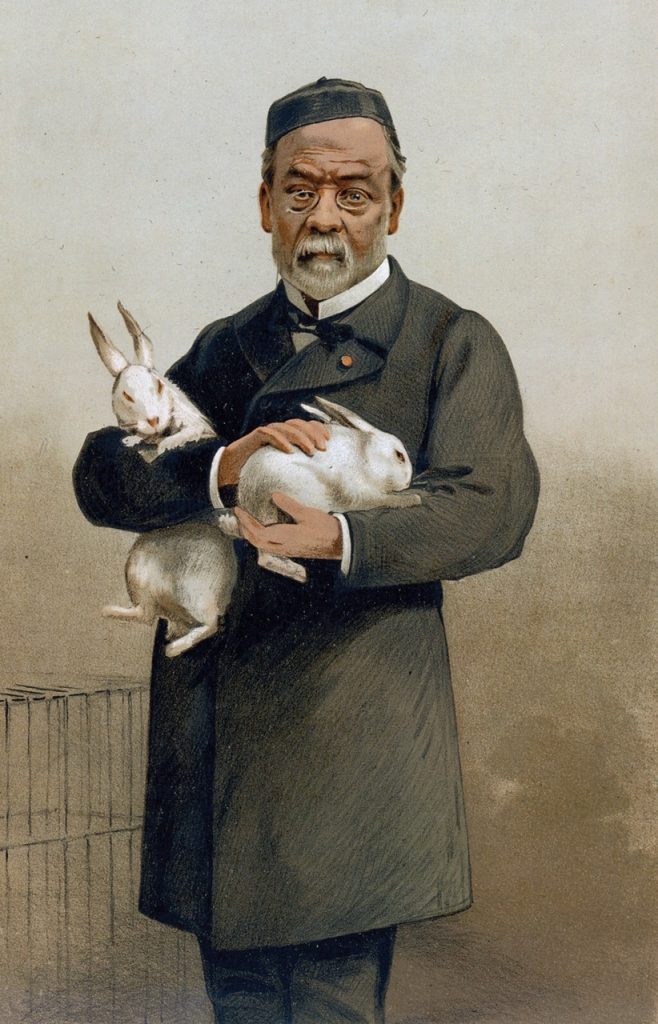 Color lithograph of French chemist and microbiologist Louis Pasteur from 1887. Pasteur ushered in the era of preventative medicine and made the connection between virulence and epidemics. Courtesy of the National Library of Medicine in Bethesda, Maryland.

A hallmark of visuals—in whatever manifestation—is that they can tell us about events in real-time (as do those created today). Sometimes these showcase erroneous public health advice owing to an undeveloped understanding of the workings of the human body. But prints can also include those created by and for the scientific community, government agencies, and by the press to inform the public; still other pandemics proved the fodder for caricatures and cartoons. In my brief survey, I’ve seen few illustrations of American epidemics (I’ve looked for ones on smallpox, yellow fever, cholera, tuberculosis, influenza, polio, malaria, and typhoid fever). Printed material with examples of popular medicine included illustrations in books and pamphlets used by physicians as well as engraved labels, trade cards, portraits of treating doctors and others.2 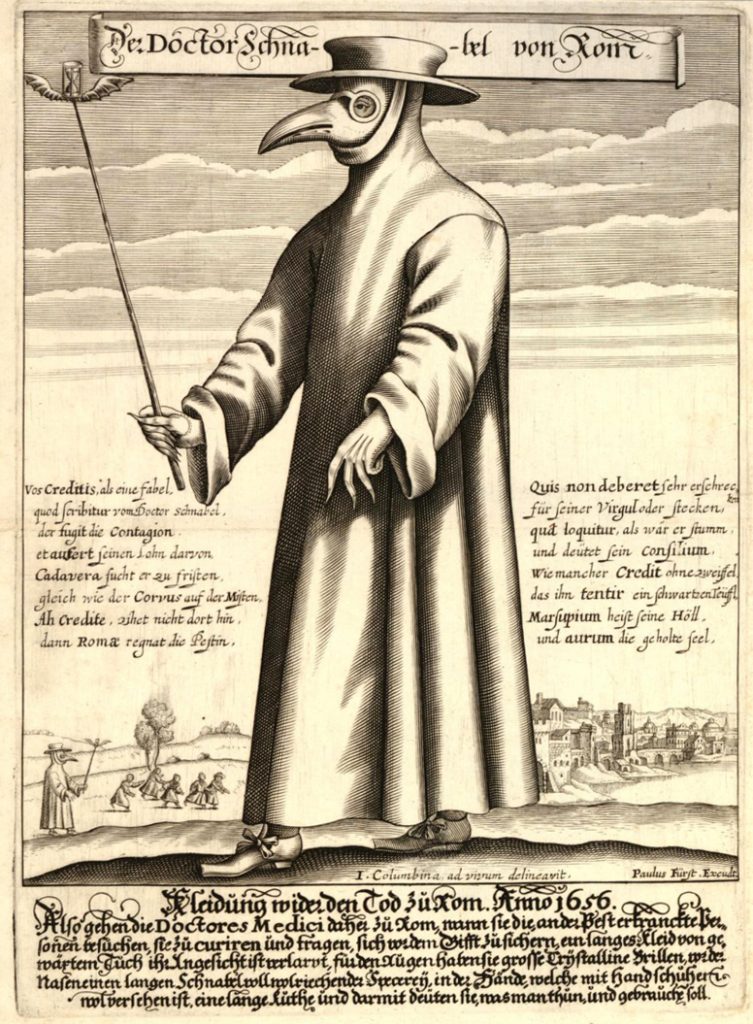 “Doctor Schnabel von Rom,” a famous engraving after an Italian broadside from 1656 showing a figure dressed with coat, gloves, mask and hat. Courtesy of the Trustees of the British Museum.

I am interested in exploring the intersection of medicine and material culture regarding pandemic history to share. As many of these images are great study-images, the images are available here. We hope to offer this as a multi-part series, and would love other institutions and dealers to submit their favorites so we can capture a range of prints, periods, places and treatments, especially of America. 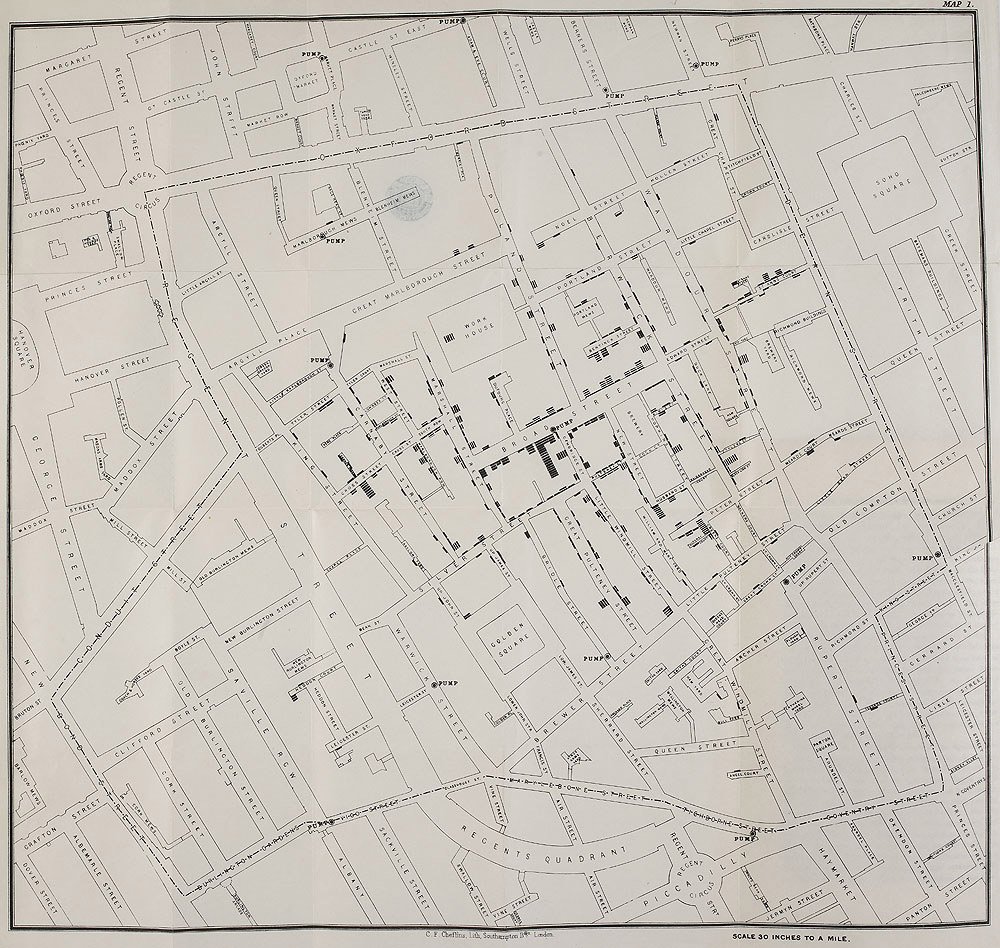 Dr. John Snow’s now famous cholera map of London created in 1854. When Snow used the map to track cholera cases with other scientists he was able to trace infection to a single water pump in the city. The image is from Snow, J. On the Mode of Communication of Cholera, 1855. Courtesy of the British Library Board. 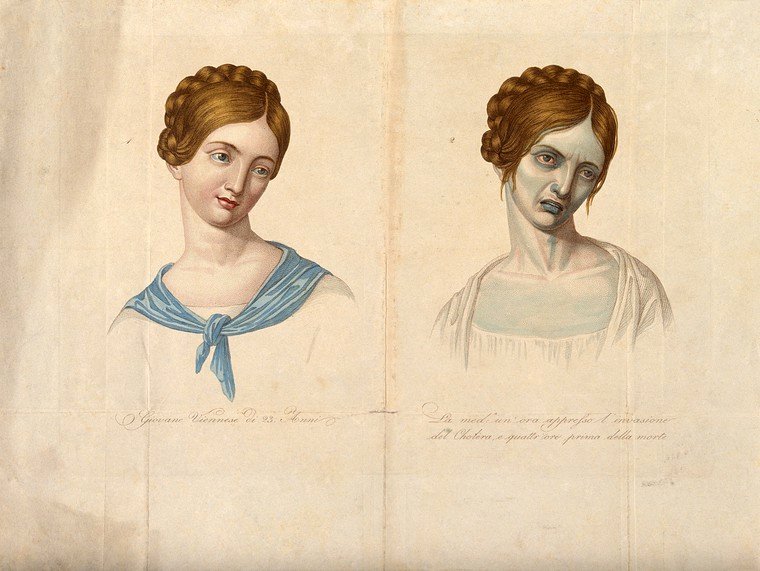 A colored Italian engraving from 1831 depicting a young woman of Vienna who died of cholera, shown when she was healthy and a few hours before her death. Courtesy of the Wellcome Library, London.

A series of four French plates from 1819 showing the development of yellow fever. From Observations sur la Fievre jaune. Courtesy of the Wellcome Library, London. 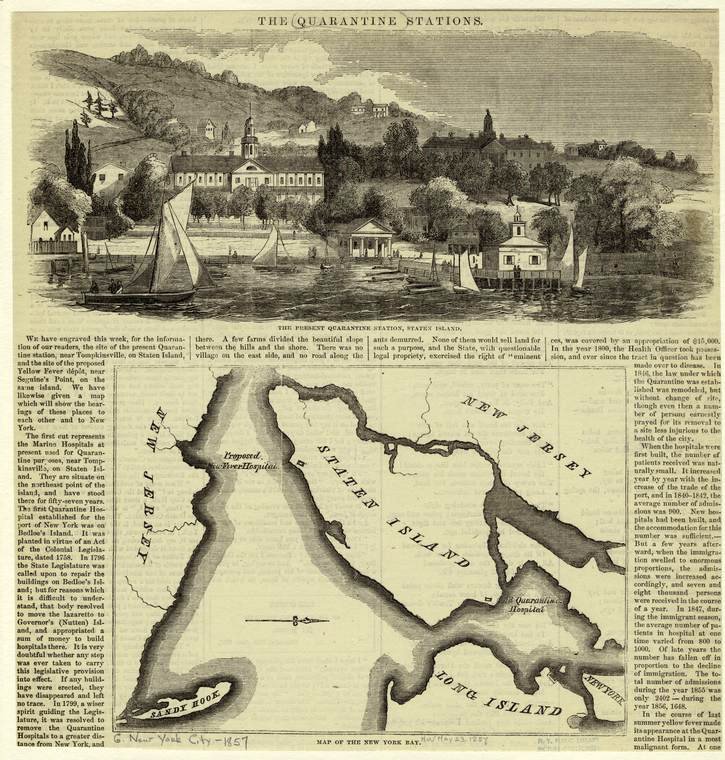 The Present Quarantine Station, Staten Island, Map of New York Bay, depicts a proposed new fever hospital. The text states “we have engraved this week, for the information of our readers, the site of the present Quarantine station on Staten Island.” It also shows a map with the bearings of these places to New York. The article appeared in Harper’s Weekly, May 23, 1857. Courtesy of the Miriam and Ira D. Wallach Division of Art at the New York Public Library. 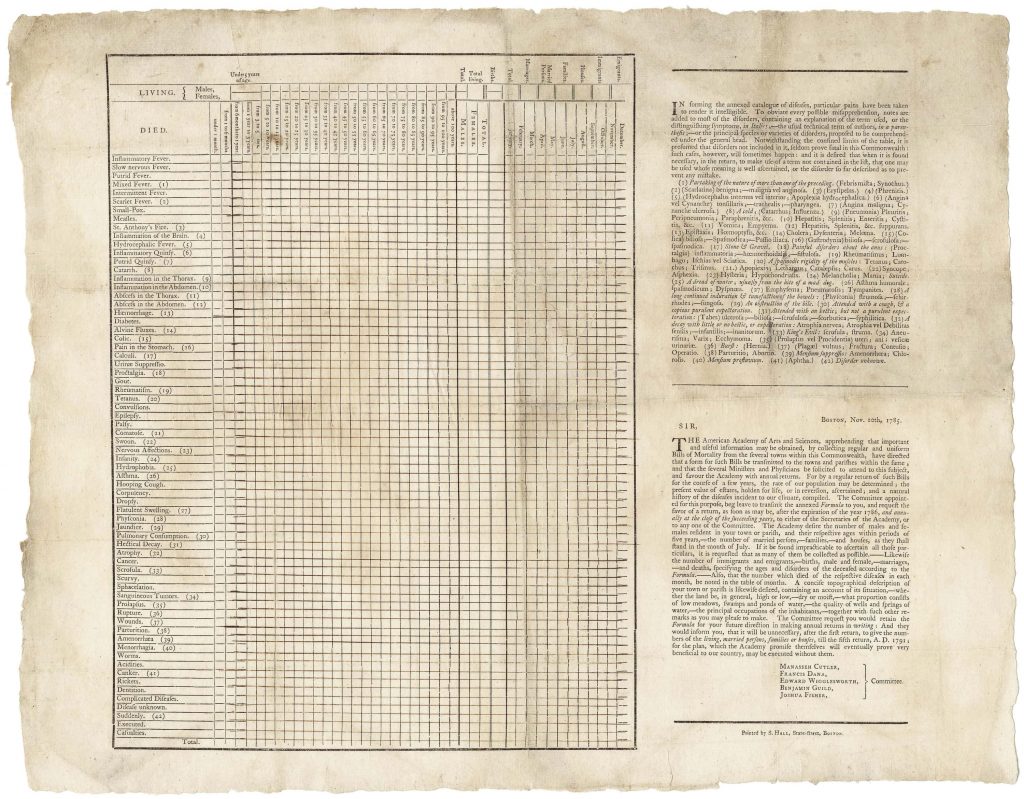 A 1785 Boston survey by Edward Wigglesworth, which shows statewide mortality data for Massachusetts. The broadside was printed and distributed to ministers and physicians throughout Massachusetts and New Hampshire and was also published in newspapers. Courtesy of Boston Rare Maps and James Arsenault & Company. 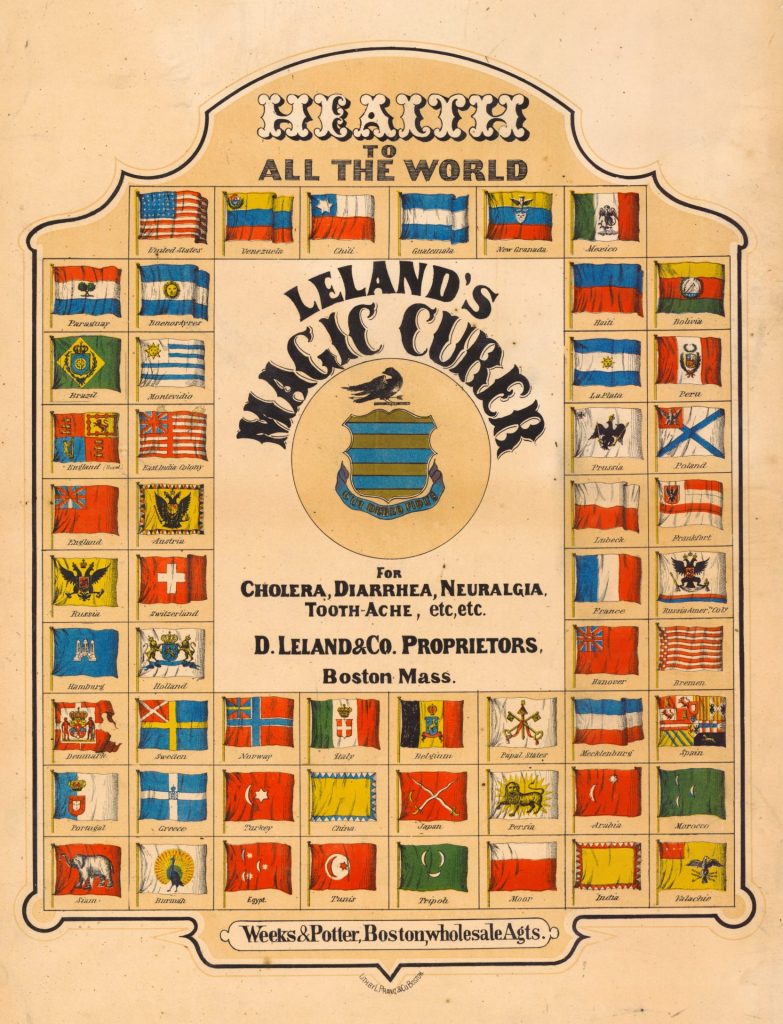 An unillustrated version of this piece originally appeared in the AHPCS News Letter (Volume 44, Issue 4).

Notes:
1. Charles Greifenstein, Curator of Archives & Manuscripts at the College of Physicians quoted as speaking to author Jim Murphy (p. 157) in his book An American Plague, 2003.

2. “Every man his own doctor”: Popular Medicine in Early America was an exhibition at member institution The Library Company of Philadelphia in 1998 and the entire full-text exhibition catalogue is available in Google books. It is a wonderful and well-illustrated read, particularly relevant during the current pandemic.