The American Antiquarian Society has lots of examples of fully lithographed books—made with both lithographic images and text—including titles by Bret Harte, children’s picture books, and inexpensive comic text.

One great example in AAS’s collection is titled Wreck-Elections of a Busy Life and was published in Hartford, Connecticut, in 1867. The entire volume is a humorous spoof of Horace Greeley’s autobiography Recollections of a Busy Life, which was published in installments in Greeley’s newspaper, the New York Tribune. The Tribune office was located near Nassau Street in New York — an area that, along with Spruce Street and Broad Street, formed an enclave for all kinds of print shops, newspaper offices, and print sellers. 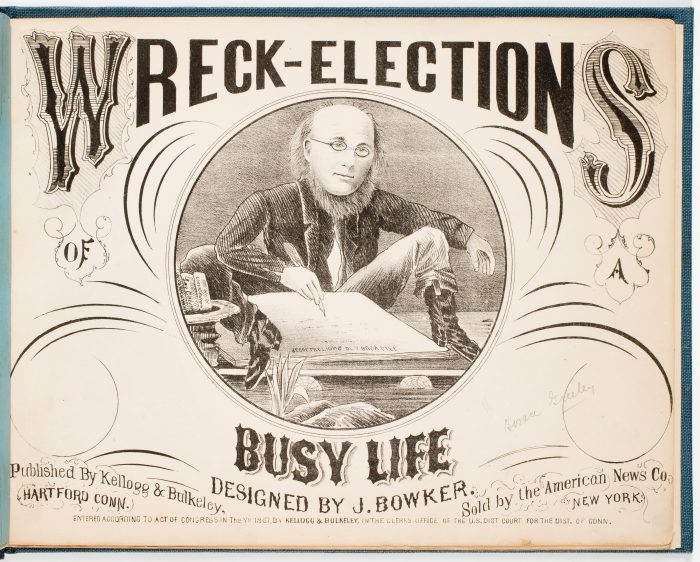 Although distributed by American News Company, a New York firm, Wreck-Elections was not printed in New York. The printer was Kellogg & Bulkeley in Hartford, Connecticut, over a hundred miles away. Kellogg was best known for single-sheet lithographs of views, portraits, and genre scenes. The partnership with Bulkeley was brand new in 1867, having been formed when some of the family sold part interest in the firm.

Originally founded in 1836, the Kelloggs had a long history of producing lithographed prints for national distribution and today are considered one of the biggest competitors of Currier & Ives, the famed New York lithographic company also founded in 1836. In 1867, when Wreck-Elections appeared, Currier & Ives had two shops in New York: one on Nassau Street and a second, newly opened space at 33 Spruce Street. Currier & Ives and Kellogg & Bulkeley were aware of each other’s print production, often copying one another or issuing modified compositions popular with their customers. This is well known among scholars of American lithography and has been discussed in recent histories of both firms.

Midway through the pages of Wreck-Elections, with its various puns and bad poetry of the story, there is a scene showing an angry Greeley trying to rouse troops on the front stoop of the Tribune building (Greeley was famous for his continued cry, “On to Richmond!,” which was perceived as war-mongering by many critics). 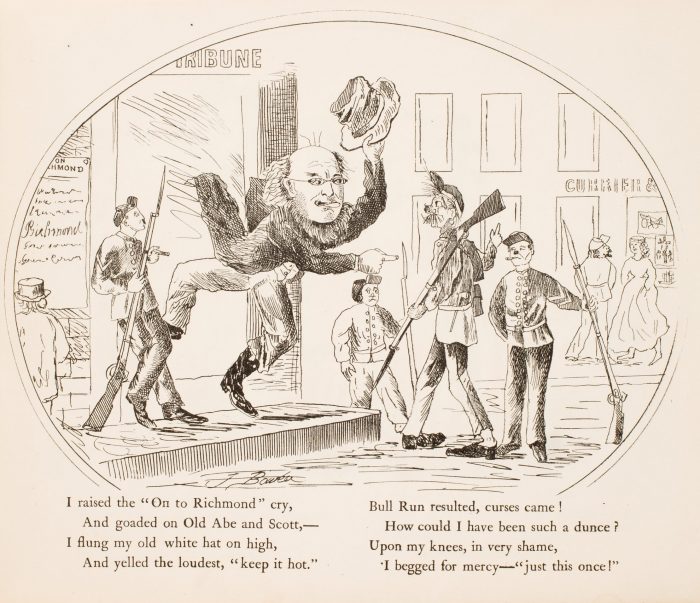 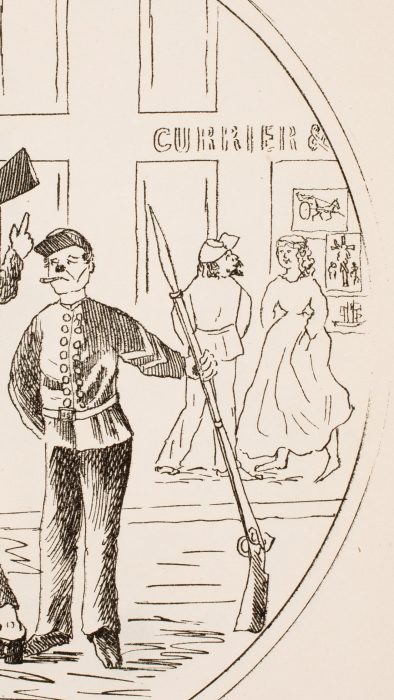 There in the background, across the street, hastily sketched by the artist up in Hartford, was the front window of Currier & Ives’s New York shop! A lady and a soldier are standing in front, but the sign over the door clearly reads “Currier &” – . Was this an insider’s tip of the hat to their New York rival by the Hartford firm? A closer look at the three prints displayed in the window revealed a religious print of Christ’s descent from the cross, a horse pulling a racing sulky, and a ship portrait, all classic Currier & Ives fare (as well as scenes produced by Kellogg & Bulkeley).

It is a bit like Coca-Cola including a Pepsi machine in the background of one of their advertisements. Maybe most readers did not notice, or if they did, perhaps they would associate Currier & Ives with Greeley, who was losing popularity as the politics of the era changed after the war years. The intent is completely unknown, of course, since the artist did not leave any letter of intent or explanation, but, really, he could have sketched anything there — empty doors and windows, an anonymous shop or office. Instead he made a quiet little insider’s joke, one that we can still appreciate more than 150 years after it was published.

Click here to see a fully digitized version of Wreck-Elections of a Busy Life.