Fanny Palmer was one of Currier & Ives’ most important and prolific artists — and her oeuvre of nearly 300 prints gives the impression of artistic invincibility. But in the small book Currier & Ives (1950), Frederic A. Conningham notes: “The only type of work she did not do was the horse racing print. According to Louis Maurer who worked with her, the one thing Mrs. Palmer could not draw was a horse.”

Being able to draw a horse well was very important at Currier & Ives. When they finally closed their doors in 1907, Currier & Ives had published almost 700 prints of horses and horseracing — 10% of their total output. In Currier & Ives: Printmakers to the American People (1942), Harry T. Peters estimated that Currier & Ives produced more horse prints than all of the other American lithographic firms combined. Their output makes sense given the ubiquity of horses in both urban and rural America — in 1867, there were 8 million horses in America for a population of about 31 million. The nation’s obsession with horse racing also exploded in popularity at this time, creating demand for specific portraits of famous stallions and mares.

If anyone at Currier & Ives was in a position to judge a well-drawn horse, it was Louis Maurer; he was one of the primary artists of horses on staff. When Nathaniel Currier first saw Maurer’s skill drawing horses, he reportedly gave him an immediate raise.

A firm grasp on equine anatomy would seem to be essential to a successful horse picture. The Louis Maurer Collection at the American Antiquarian Society includes multiple pencil sketches of horses. 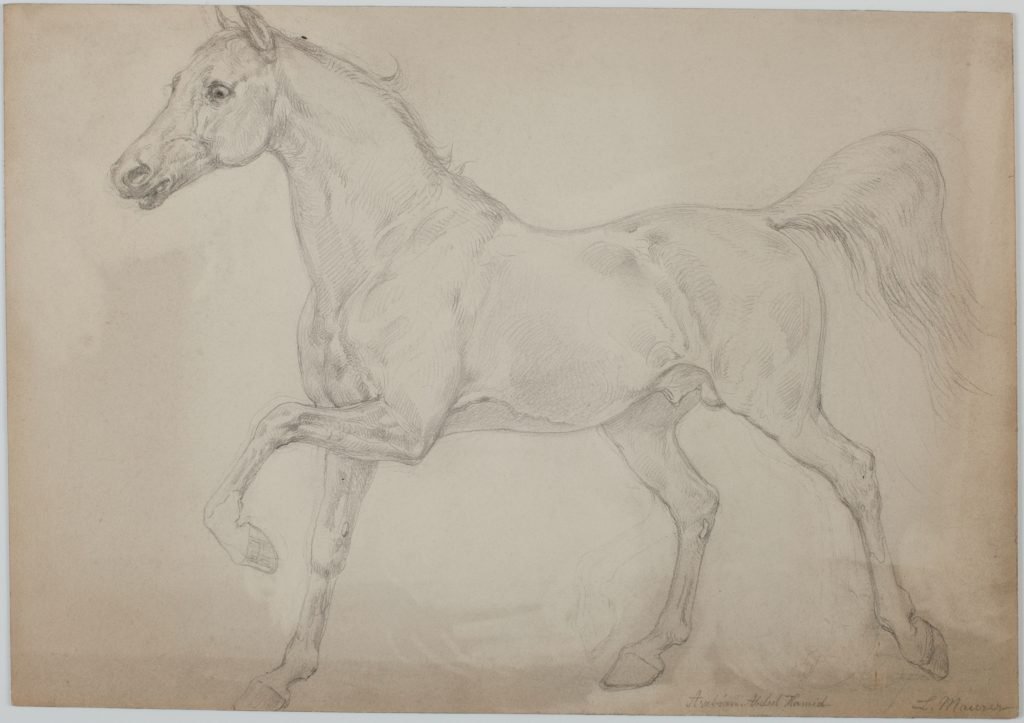 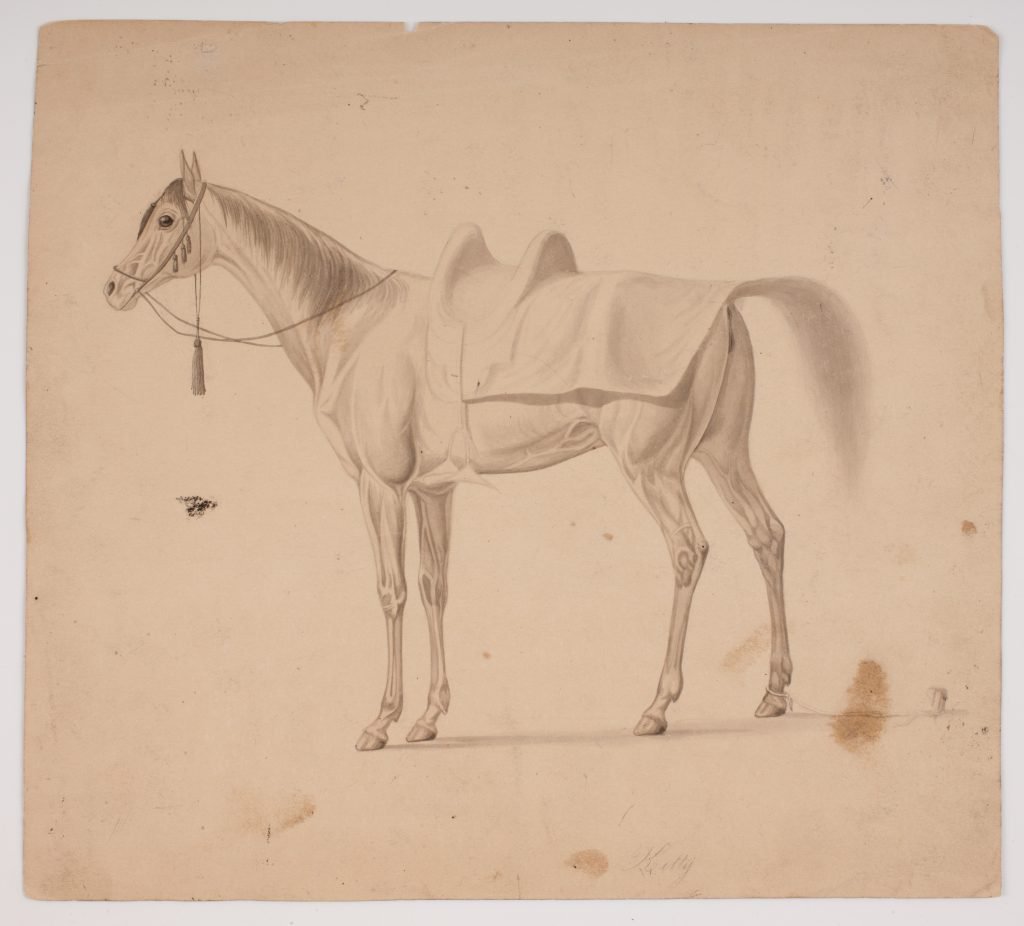 Maurer’s careful attention to the shape of a horse can be seen in his Preparing for Market, a Currier lithograph from 1856. 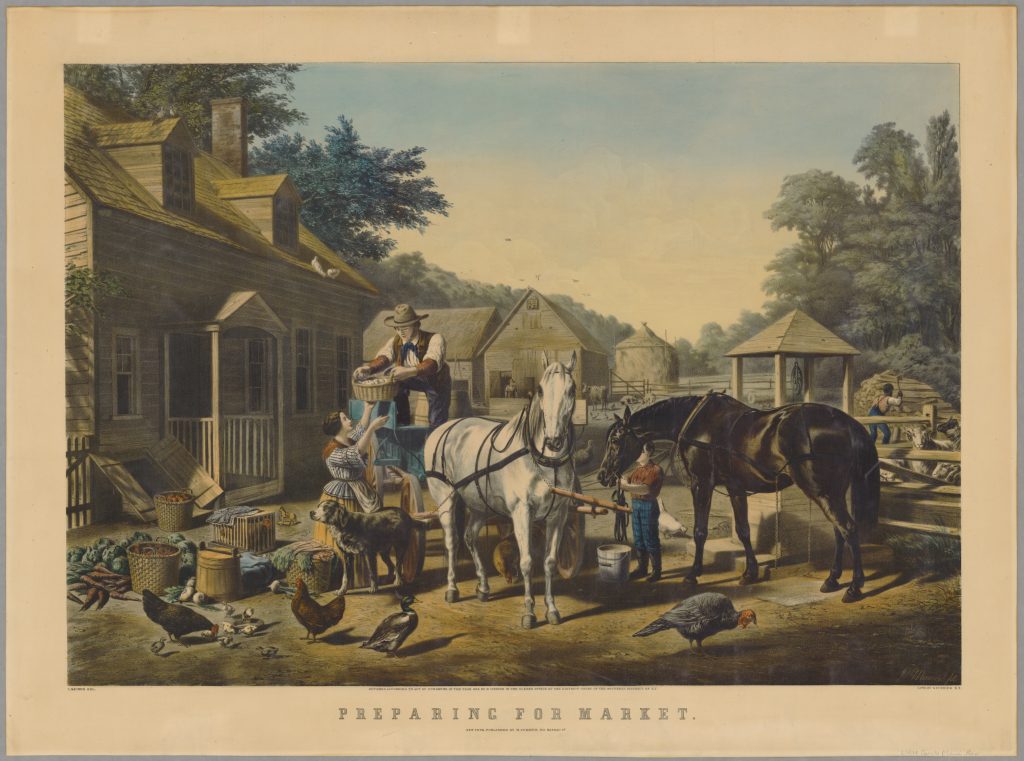 So the obvious question is how do Palmer’s horse-focused prints compare? There isn’t an easy answer because artists (like Maurer and Palmer) were known to contribute their specific skills to another’s print uncredited. A “good” horse on a Palmer print might actually be Maurer’s work.

Palmer’s American Farm Yard – Morning (1857) turns out to be quite similar to Preparing for Market, and the horses look acceptable. 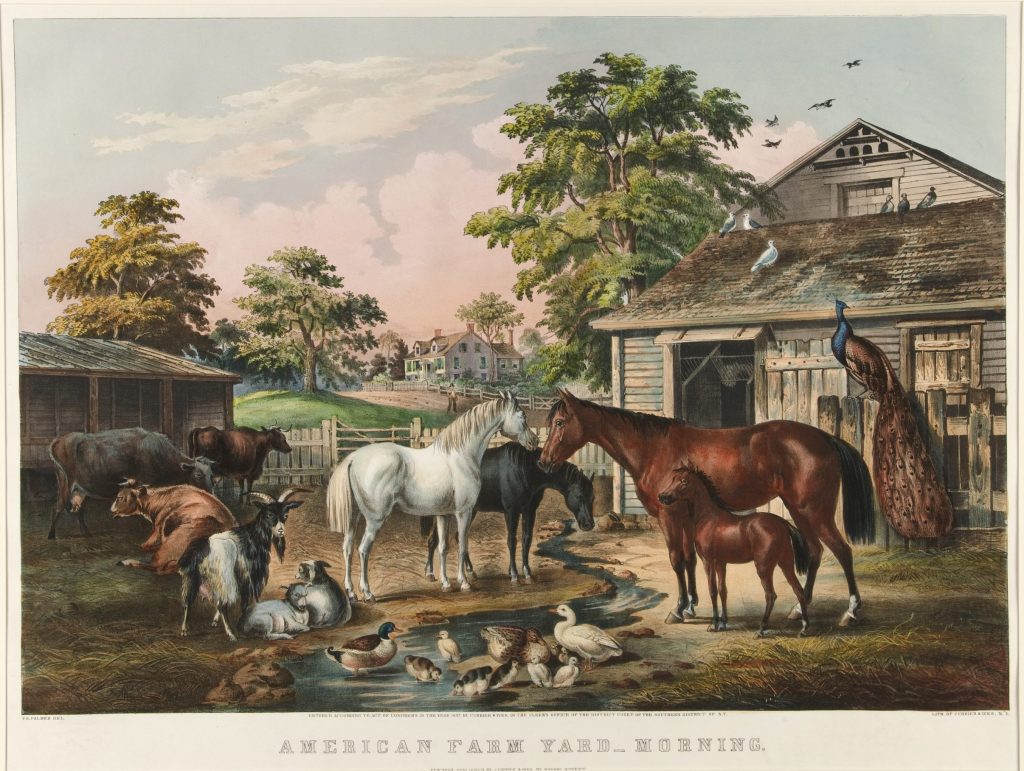 It’s the background horses in Palmer’s companion print, American Farm Yard – Evening (1857), however, that provide some clue as to the sort of Palmer horses that Maurer may have disliked. 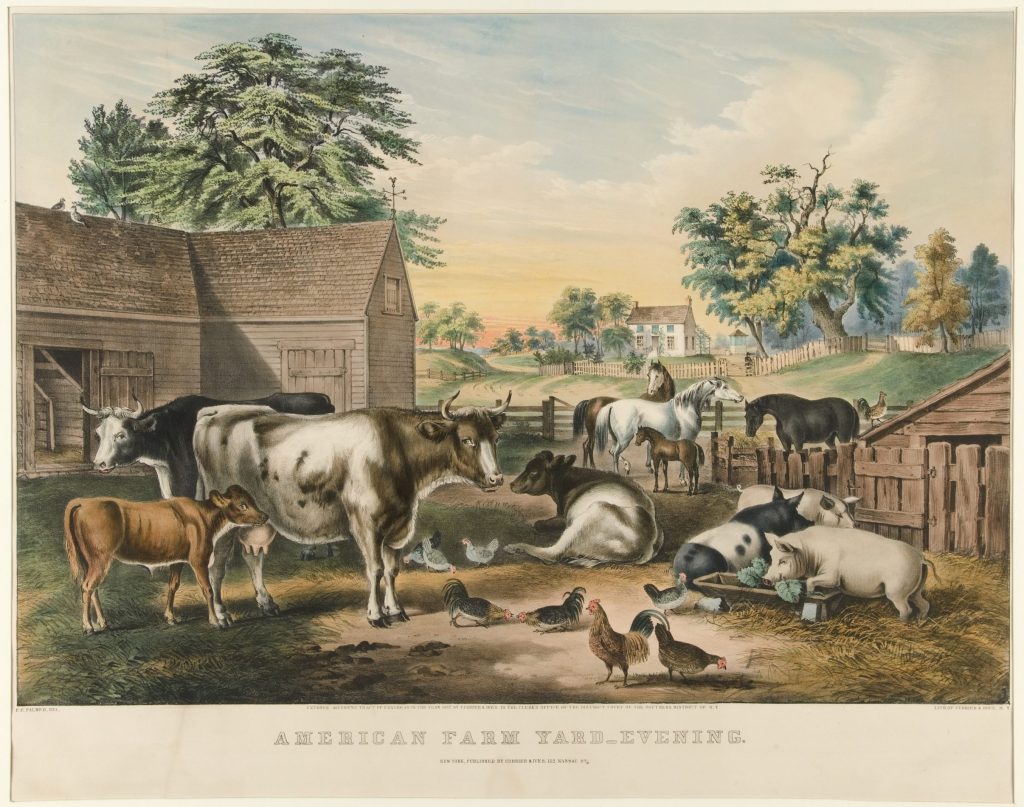 They are more rounded in shape and less defined. And these figures seem to represent the norm when compared to other horses that appear throughout Palmer’s prints.

Palmer’s horses typically have curving soft bodies, less realistic frames, and more cartoonish appearances. They often look slow-moving, like sleepy side notes amid the country scenery, as in Palmer’s The Cattskill [sic] Mountains (1860). 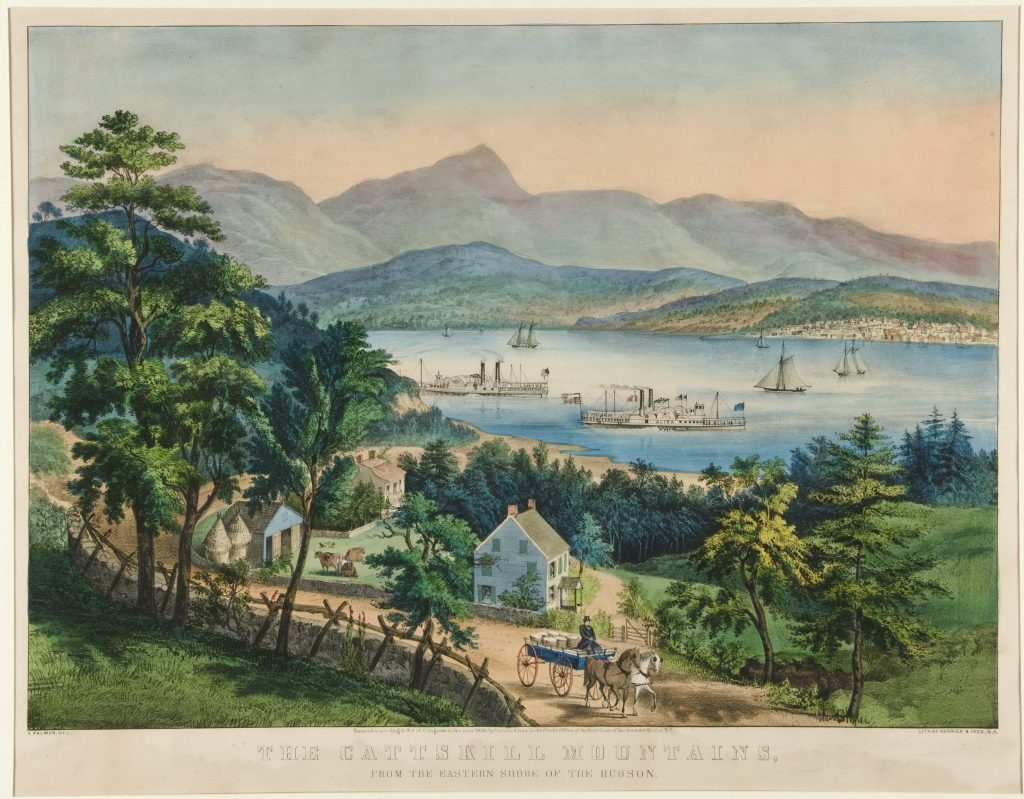 This may explain why Palmer never joined Maurer in the pantheon of Currier & Ives horse artists. 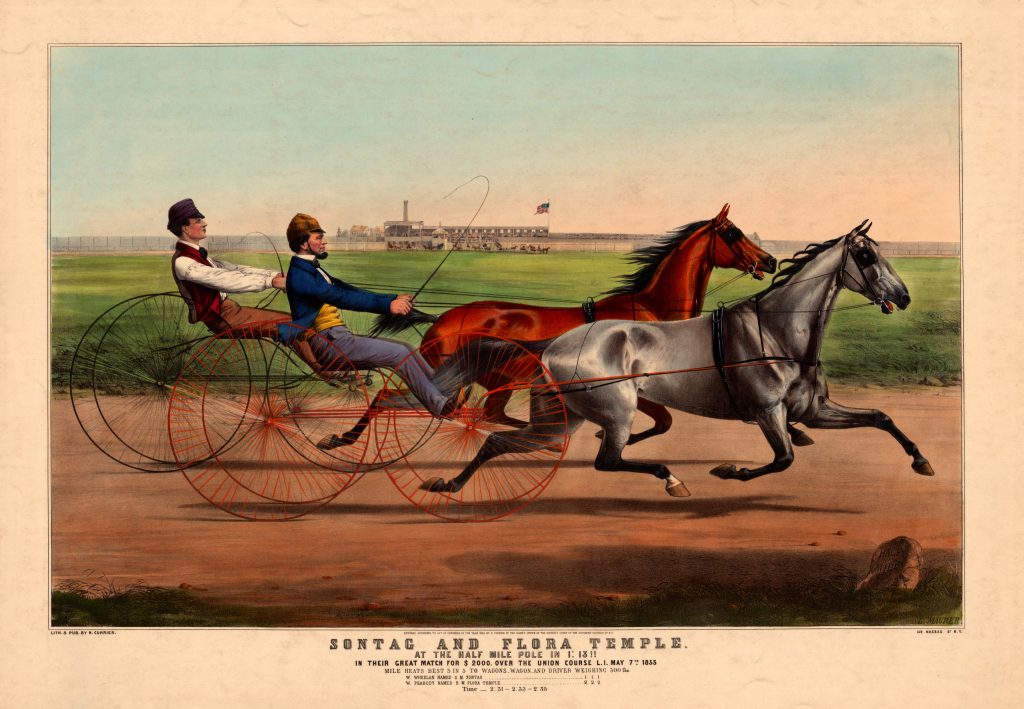 Volume II of Frank Forester’s Horse and Horsemanship of the United States (1857) by Henry William Herbert reproduces an image of the renowned racing mare Lady Suffolk taken from a lithograph by artist Robert Clarke. Herbert characterized the image as “indisputably the best likeness” of the horse. 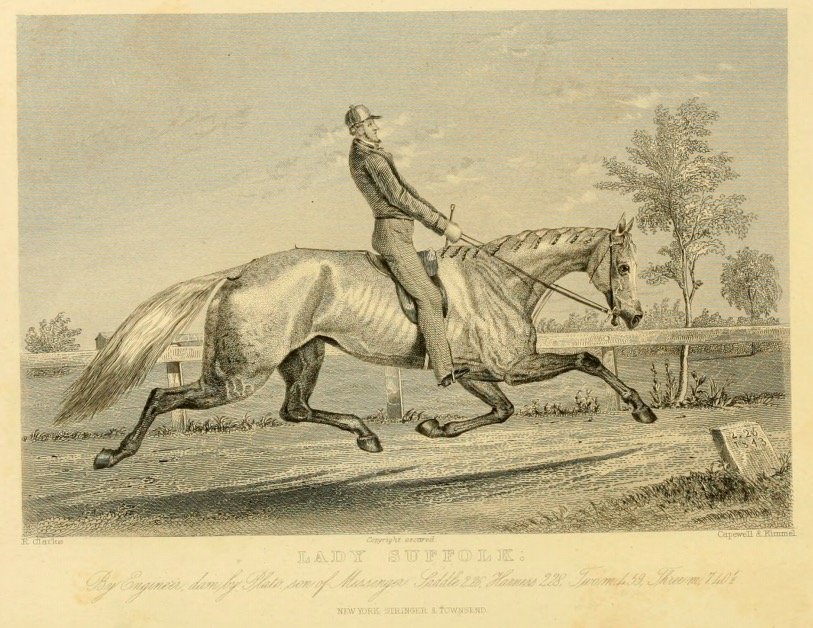 Herbert further applauded Clarke for his “power of catching and committing to paper the peculiar action, style of going and salient characteristics of any horse, while in motion, on the trot especially.” Though he did note that Clarke “was somewhat deficient, however, in anatomical knowledge; and had a habit, which amounted, in his works, to an absolute mannerism of representing his animals with undersized limbs.”

Horses are animated animals, from their expressive eyes down to their twitching tails. There are so many rapidly changing components in the movement of a horse, especially in the placement of the four legs when moving, that it all can seem a bit awkward when isolated in a two-dimensional image. Until Eadweard Muybridge’s groundbreaking 1878 Horses in Motion, there wasn’t even agreement on how a horse’s legs actually moved while galloping. 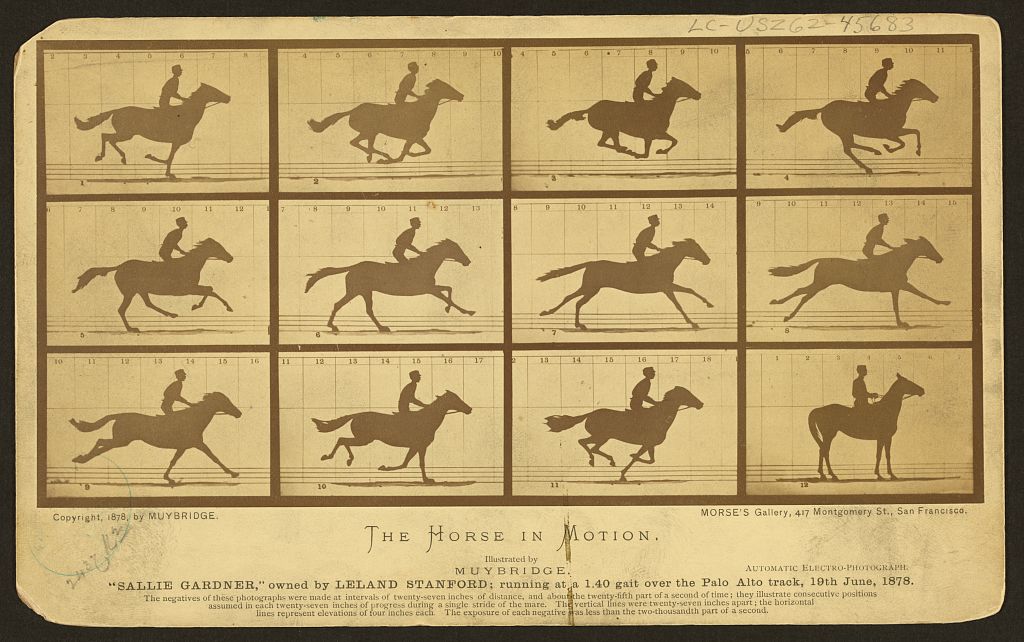 The horse in motion, illus. by Muybridge. “Sallie Gardner,” owned by Leland Stanford, running at a 1:40 gait over the Palo Alto track, 19 June 1878: 2 frames showing diagram of foot movements. Courtesy of the Library of Congress.

So when an artist like Robert Clarke could convincingly capture a horse’s “style of going,” concessions could be made for limitations in anatomical realism.

What’s the verdict when we isolate the horses in some of Fanny Palmer’s prints? To varying degrees, her horses often lack both motion and realism: 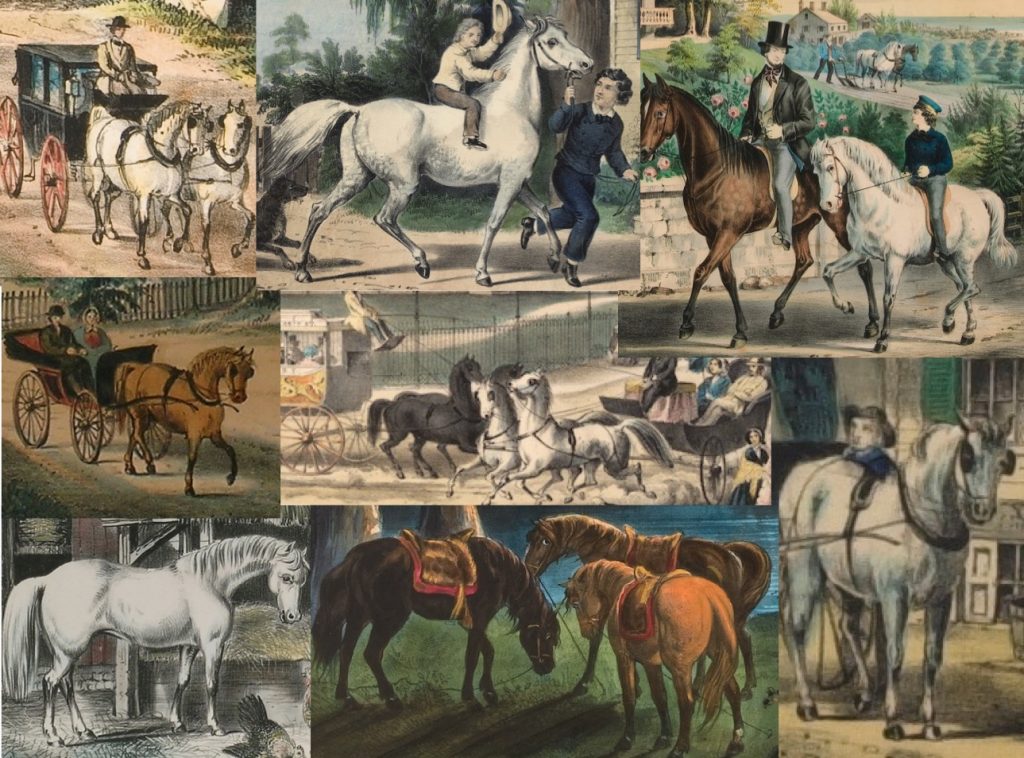 Currier & Ives wanted horses of movement. As Harry S. Peters surmised about the popularity of their horse prints: “The great sales impetus of these prints was perhaps aided by the American desire, then as now, for displays of speed.”

Below, for your enjoyment, is just a very small sampling of Currier & Ives horse prints produced by artists like Maurer, John Cameron, and Thomas Worth. 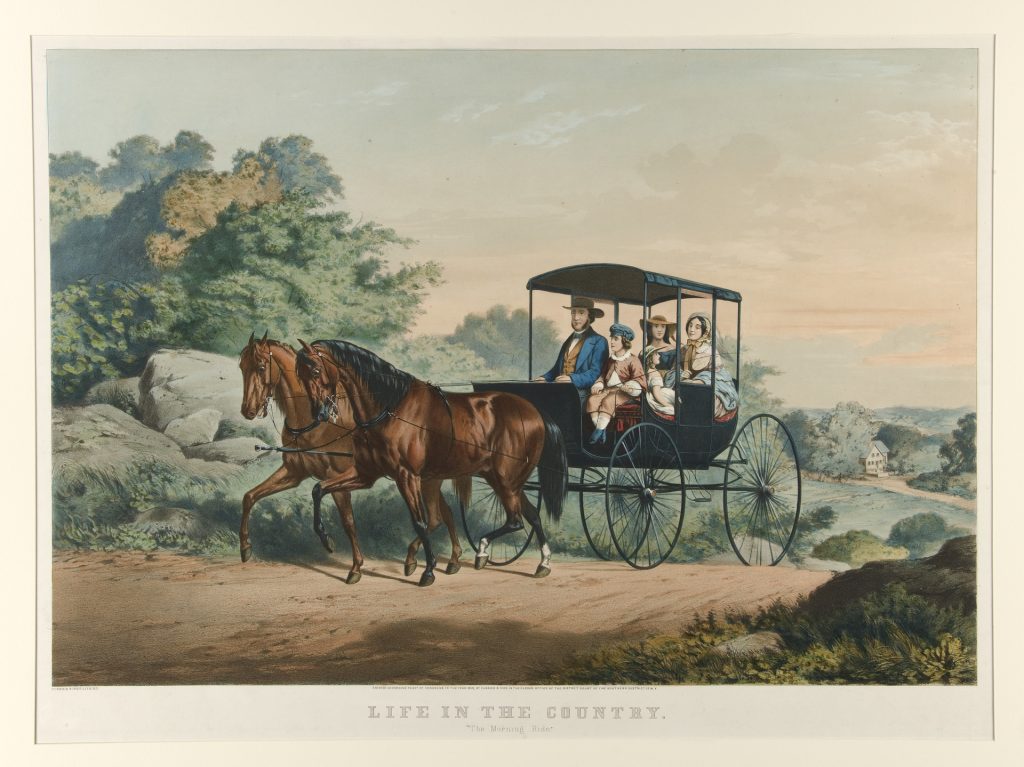 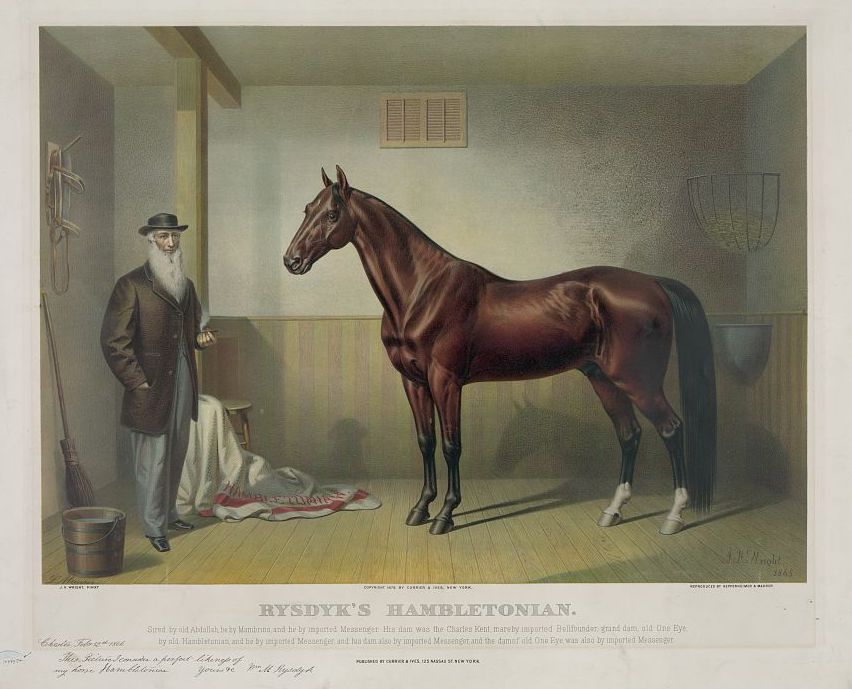 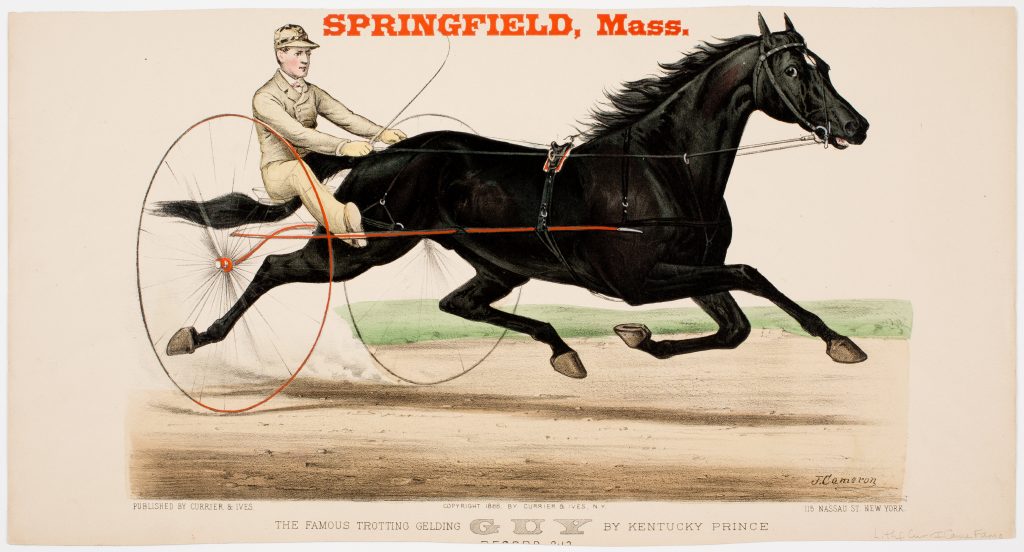 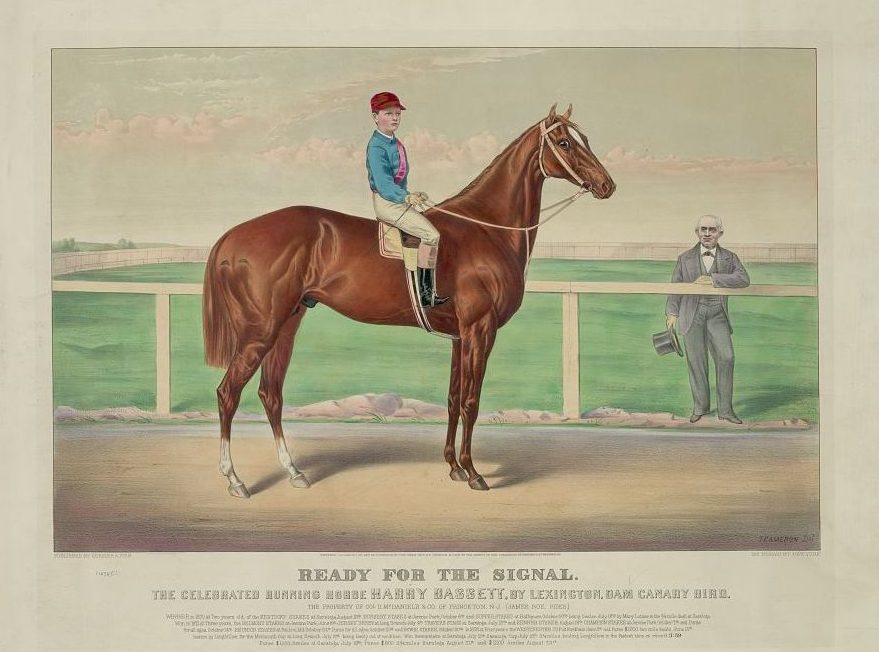 John Cameron, Ready for the Signal. The Celebrated Running Horse Harry Basset, By Lexington … [Lithograph, Currier & Ives, 1872]. Courtesy of the Library of Congress. 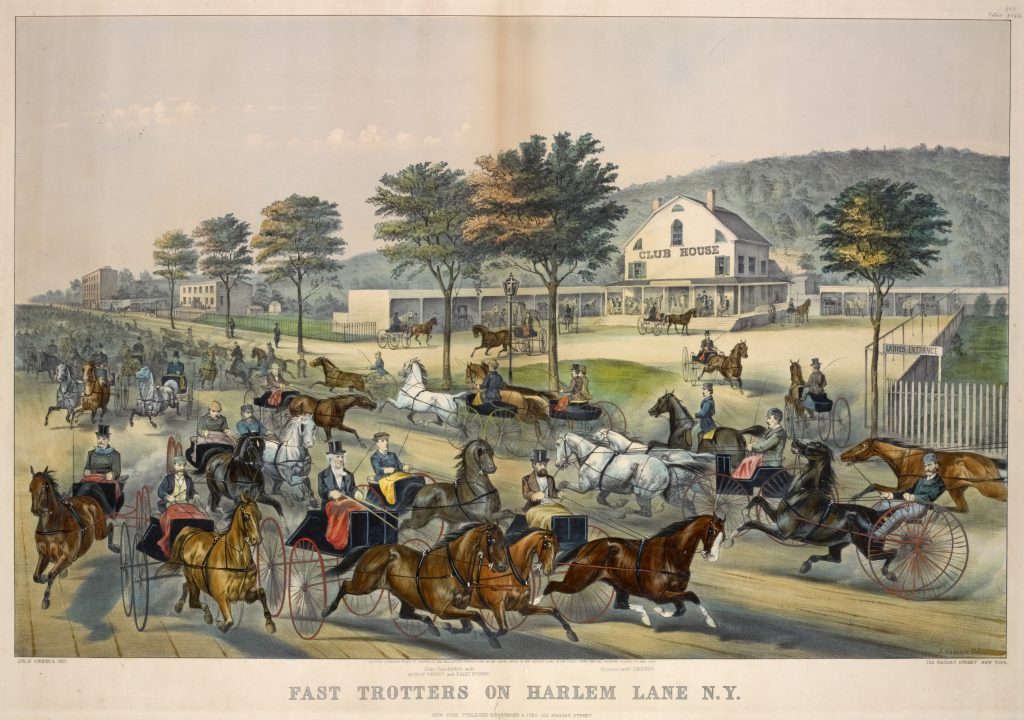 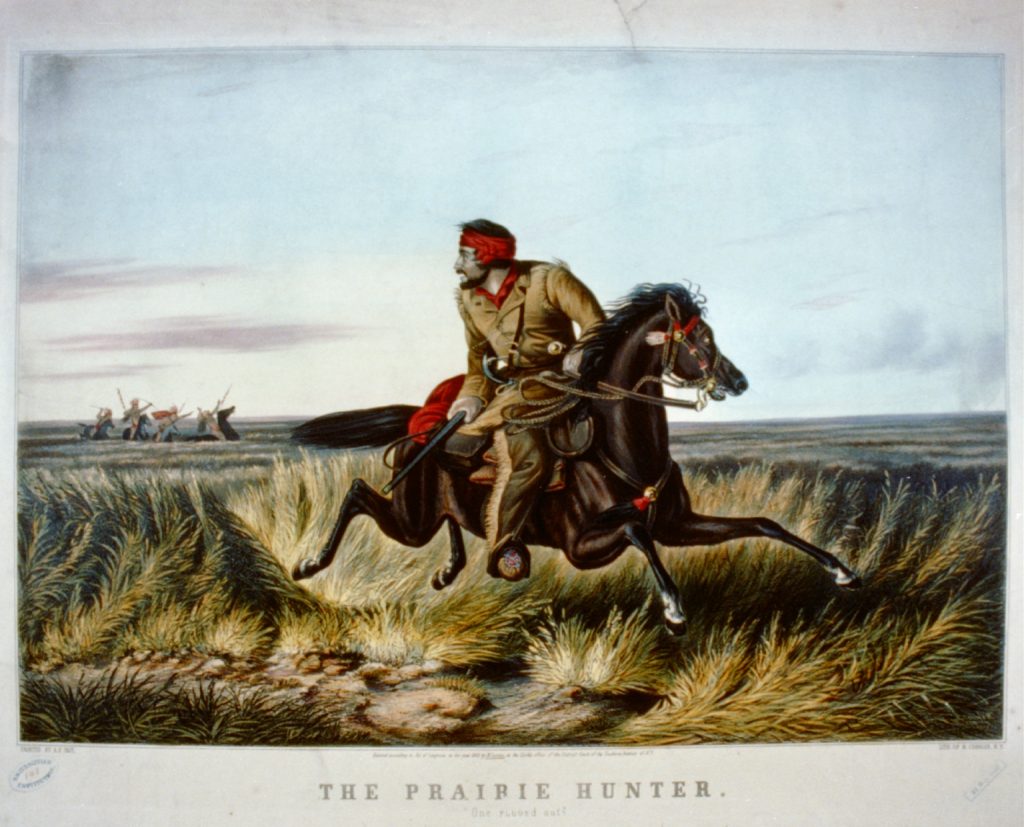 Otto Knirsch after Arthur Fitzwilliam Tait, The Prairie Hunter: “One Rubbed Out!” [Lithograph, N. Currier, 1852]. Courtesy of the Library of Congress. 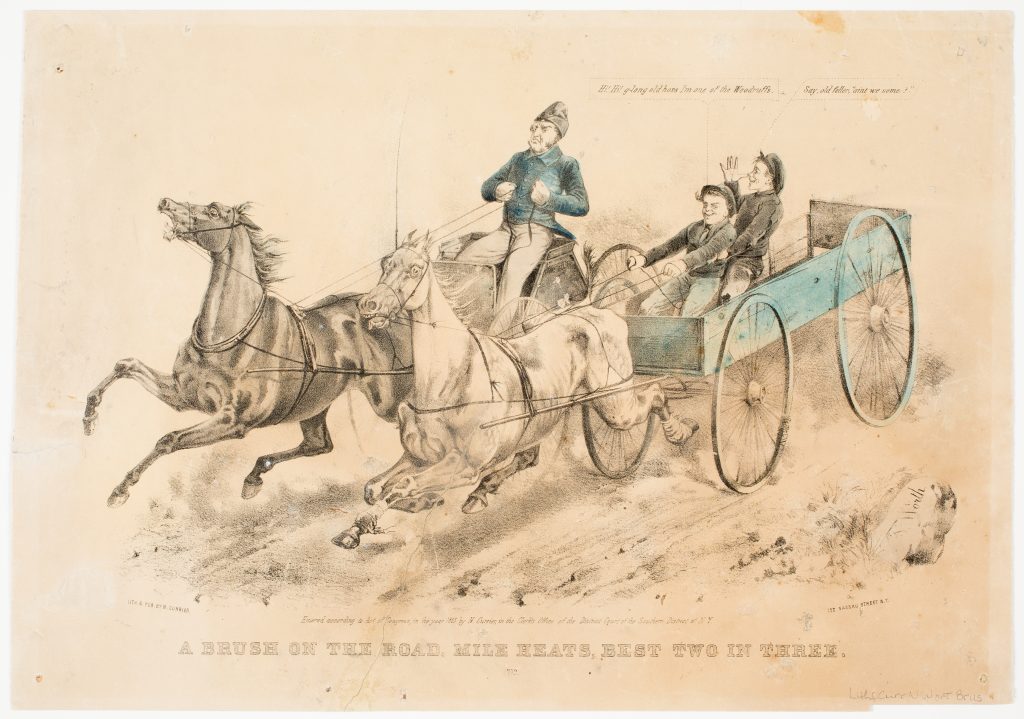 Thomas Worth, A Brush on the Road, Mile Heats, Best Two in Three [Lithograph, N. Currier, 1855]. Courtesy of the American Antiquarian Society. 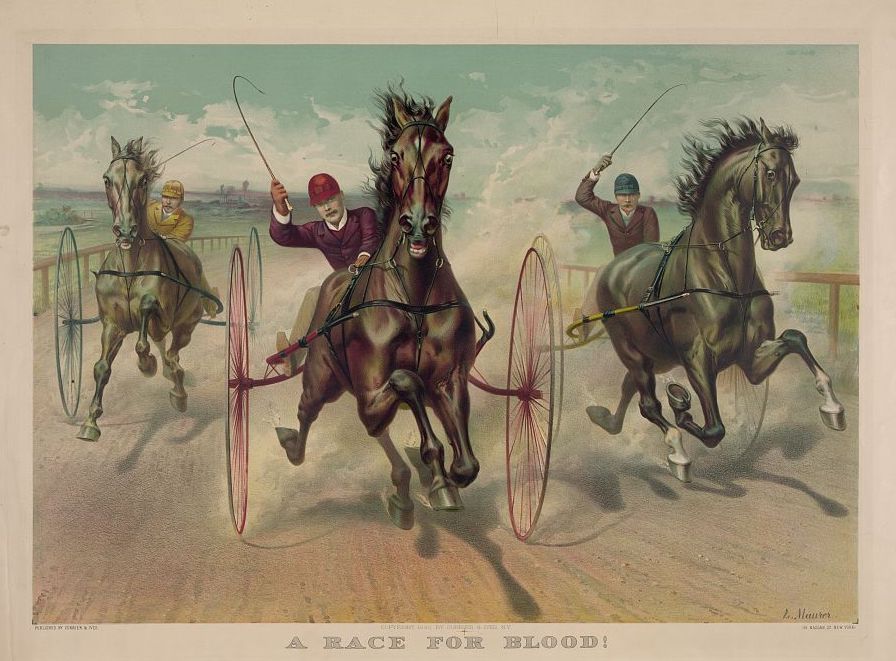 Louis Maurer, A Race For Blood! [Lithograph, Currier & Ives, 1890]. Courtesy of the Library of Congress.