The Lynch Archives is one of the premier private collections of American sheet music. Kevin Hugh Lynch is a steward of the Lynch Archives, begun more than one hundred years ago by his father, band leader and art dealer Francis Lynch. The collection of published popular music dating from 1736 to 1987 is uniquely sorted by subject, archived, and conserved. It is based principally on prominent nineteenth-century publications of American and British music, although many European prints are included as well.

In this three-part series, Kevin Lynch explores the variety of music title-page design through three sets of unusual and rare pieces from the Lynch Archives along with his own commentary on what makes these covers so special. Read Part 1 and Part 2! 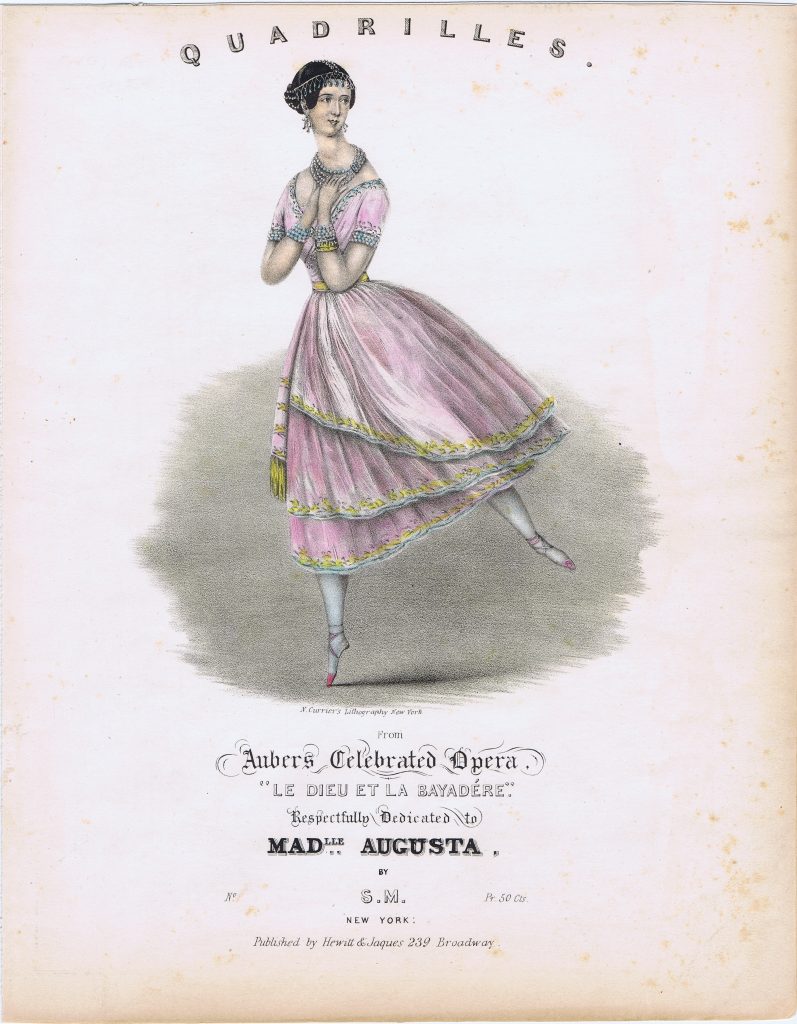 Quadrilles.
Lithographed and hand colored by N. Currier’s Lithography, New York, circa 1837-1841 (the only years publishers Hewitt and Jacques were at the printed address of 239 Broadway), vertical format, folio.

There is some question as to whether it was Currier’s shop that colored the litho or whether we are looking at ‘color added later.’ Though the lion’s share of Currier’s sheet music lithography matched the years above (perhaps a hundred different title page designs), colored lithos are very rare. Black and white lithos were the rule, often done by William K. Hewitt, whose sketch for the burning of the Lexington served as the basis for Currier’s first popular lithograph in 1840. Could this be one of the earliest hand-colored lithographs Nathaniel Currier produced?

The image features ballet dancer Augusta Fuchs in a well-known pose. A tinted Currier print of Madlle. Augusta is in the Peters Collection at the Smithsonian. Fuchs appeared in La Bayadere, credited on the cover, at the Park Theatre in New York in November of 1836, which argues for 1836 or 1837 as the date the music was published. The coloring does indeed look to be from the period. 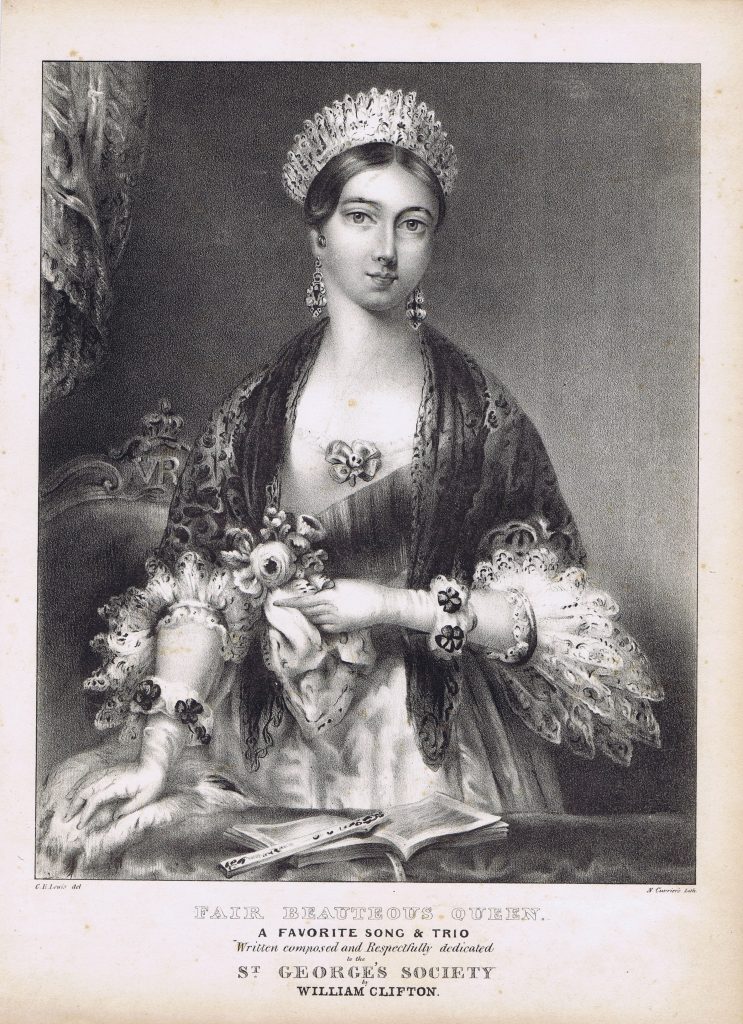 This is one of the more beautiful black-and-white lithographic renderings of the queen, Reina Victoria, early in her reign. She took the throne the prior year and her bicentennial was, in fact, just last year. There is a bit of mystery to this print. In 1947, Harry Dichter, author of Early American Sheet Music, a trusted source, released a volume of music for sale, complete with prices. This piece was priced way beyond the other Victoria music prints and way over the dollar amount that would have seemed appropriate. There could be only one reason – extreme rarity.

Exhaustive searches on the Internet a number of years ago located a single copy – at the Library of Congress. Since then a second copy has been discovered at Baylor University. It is not listed in WorldCat.org and not at the top university archive for prominent sheet music illustrations, the Lester Levy Collection (Johns Hopkins University). It’s likely this is a ‘single digit rarity’ with less than ten copies assumed to exist.

The music is written, composed and respectfully dedicated to the St. George’s Society in New York, a charitable organization that benefitted those in need within the British and Commonwealth community of New York. It’s interesting that in 1838 the St. George’s Society of Philadelphia commissioned the great Thomas Sully to paint what became a famous portrait of the illustrious queen.