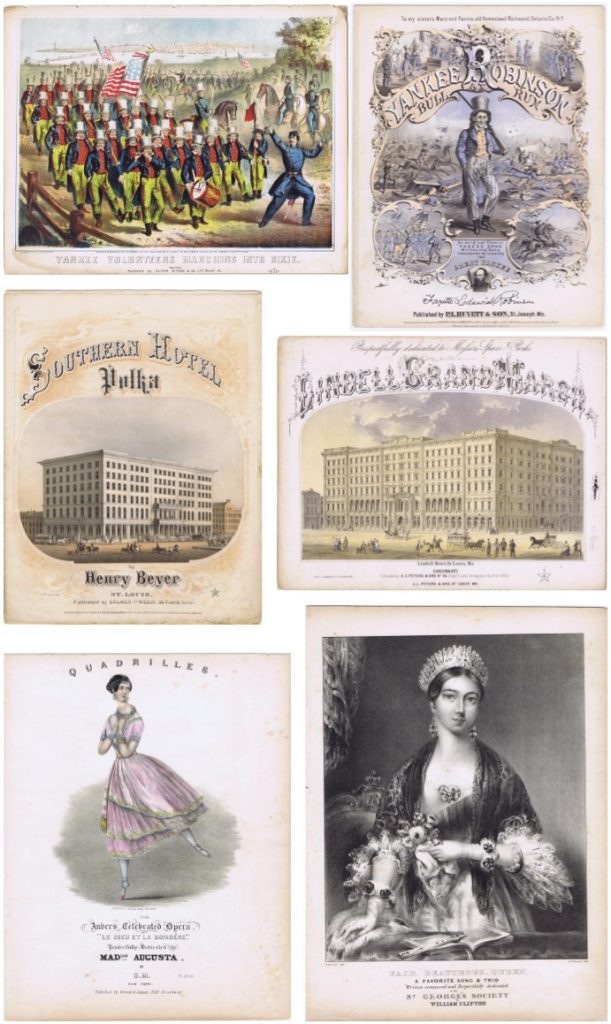 Before radio, records, CDs, or MP3s, if most Americans wanted to hear music, they needed to create it themselves. As the growing American middle class of the 19th century eagerly purchased pianos and other musical instruments for their homes, they also bought sheet music. By 1855, one New York publishing house was advertising a stock of one million musical works.

And just as the music industry of the late 20th century lured potential buyers with record-sleeve and CD-case artwork, earlier music publishers did the same with illustrated title pages. These pictorial covers provide a seemingly inexhaustible trove of images on an amazingly diverse range of subjects.

A number of libraries have American sheet music holdings. Among private collections, the Lynch Archives stands out as one of the premier collections. Kevin Hugh Lynch is a steward of the Lynch Archives, begun more than one hundred years ago by his father, band leader and art dealer Francis Lynch. The collection of published popular music dating from 1736 to 1987 is uniquely sorted by subject, archived, and conserved. It is based principally on prominent nineteenth-century publications of American and British music, although many European prints are included as well.

In this three-part series, Kevin Lynch explores the variety of music title-page design through three sets of unusual and rare pieces from the Lynch Archives along with his own commentary on what makes these covers so special. (Jump to Part 2 or Part 3!)

In part one, Kevin explores two covers with imagery of the American Civil War: 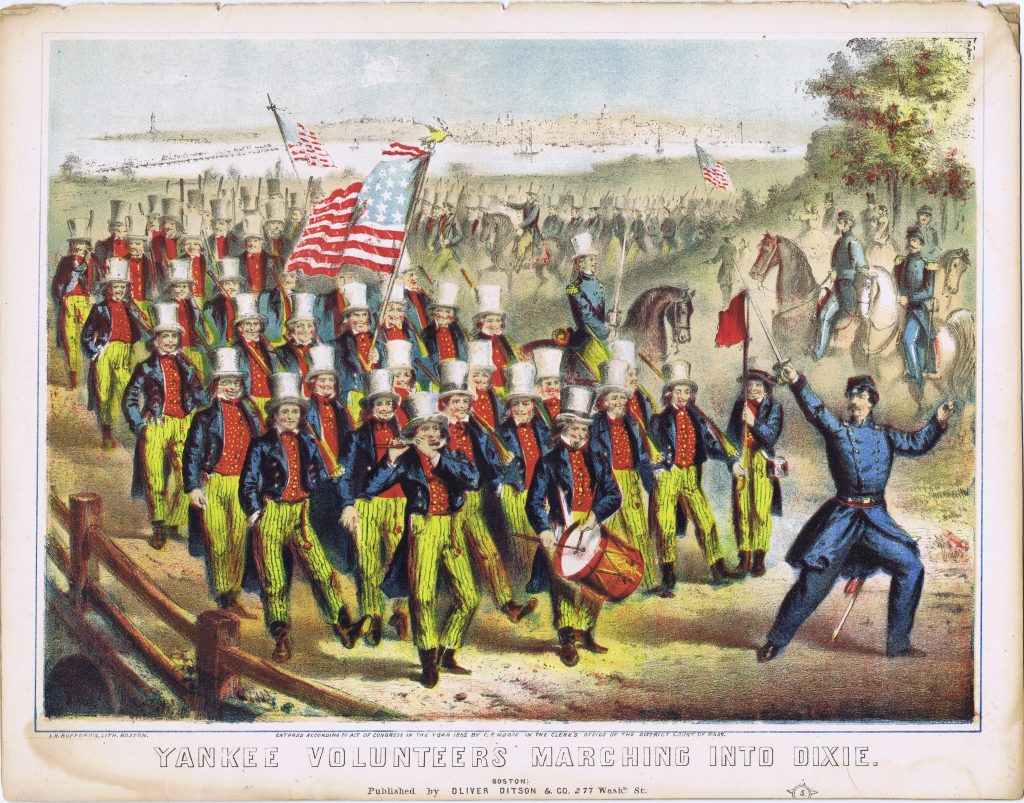 This is the only music print I know of that is held at each of these archives: the Library of Congress, the Smithsonian (Harry Peters Collection) and the Metropolitan Museum of Art in New York.

The humorous naiveté of the Northern forces in the Civil War’s first year was encapsulated with this image and also the next (Yankee Robinson at Bull Run). Though not published until 1862, long after the First Battle of Bull Run (First Battle of Manassas) in July 1861, the iconic image of the ‘three-month volunteer’ that occurs in the following image is also present here. ‘An easy march into Richmond’ seems to be the suggestion. The picture of the soldiers, all uniformly dressed in top hat, blue vest, and yellow pinstriped pants, is so winning it’s hard to say the charm of the image was excelled on music covers in the four long years of war. 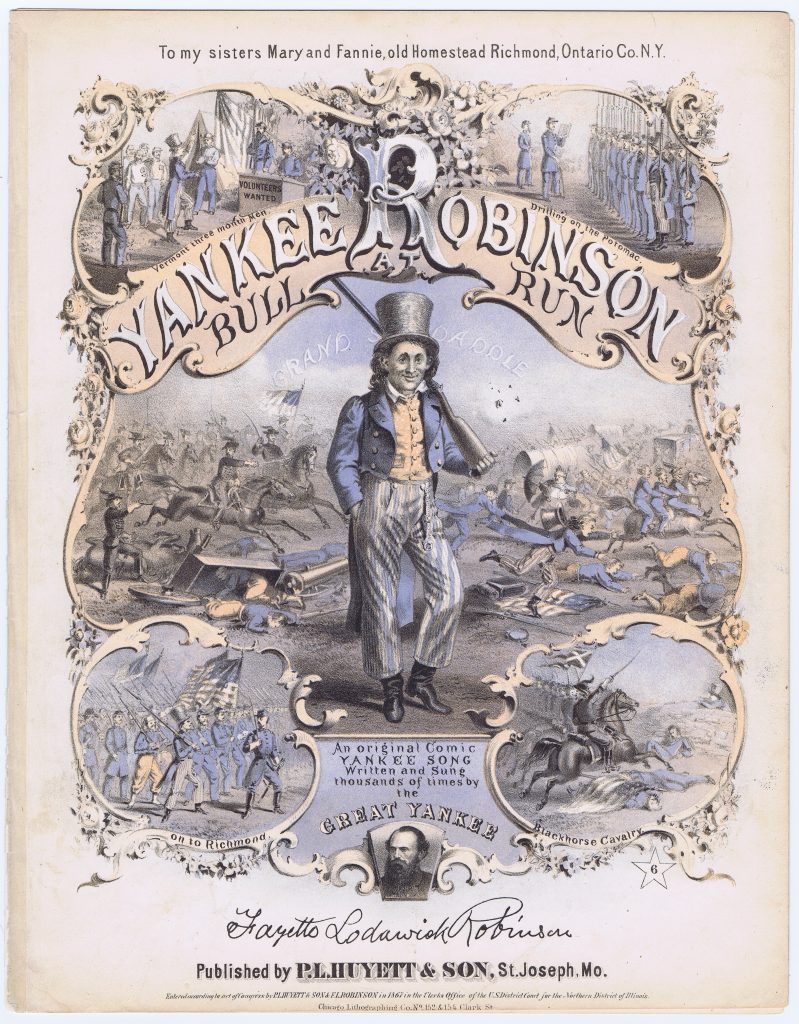 This was published by P.L. Huyett and Son in St. Joseph, Missouri. This publisher and this city were not additionally known to print music during this time.

When I obtained this publication, sheet music maven Larry Zimmerman had this to say, “you know this is mythologically rare.” I have used at times certain adjectives to communicate the depth of rarity regarding this piece or that – magically rare, wickedly rare, deviously rare, etc. Searches on the Internet, WorldCat.org, and elsewhere find this print at the Library of Congress, the Lester Levy Collection at Johns Hopkins and one other personal archive. That’s it. Let’s call it ponderously rare.

The likelihood that this is the only lithographic image on music of the principal, initial battle of Bull Run (Manassas) definitely adds interest. But there are other reasons for its historical relevance. It is certainly the only time the Confederate Blackhorse Cavalry appears on a music title-page, and that regiment had some standing. It also very humorously depicts ‘The Grand Skedaddle,’ as the retreat toward Washington was referred to after Northern forces were repulsed. You can see that moniker written in the sky behind Yankee Robinson. And the main illustration gives a vivid detailing of the hightailing, including three men on a horse (far right) and one gentleman inexplicably opening an umbrella (!).

Fayette Lodowick Robinson, the self-entitled ‘Great Yankee’ pictured on the cover, was a staunch abolitionist and was also one of the best known names in circus lore during the 19th century. He had more than forty years in the business and merged his show in the last year of his life (1884) with The Ringling Brothers, who were just starting out at that time.

Click here to continue to Part 2 of this series!