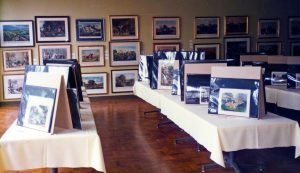 “I am Done Collecting—Now What?” contains great tips from appraiser and art historian Leah Tharpe on things to consider when preparing to sell or donate a print collection.

Margaret Leslie Davis’s new book, The Lost Gutenberg (TarcherPerigee, 2019), might be considered a cautionary tale for these same collectors getting ready to donate their collections.

Davis’s book tracks one surviving copy of the Gutenberg Bible known as “No. 45.” No. 45 eventually made its way into the collection of Estelle Doheny, a serious rare book collector and the widow of a California oil tycoon. Doheny donated the Gutenberg along with most of her collection to St. John’s Seminary in Camarillo, California.

Doheny (who died in 1958) may have assumed her collection would form the foundation of the Seminary’s special collections in perpetuity, but the deed of gift included a clause allowing the Los Angeles Archdiocese to sell the items twenty-five years after her death.

When the restriction expired in 1983, Davis writes, “The Los Angeles Archdiocese, unable to resist monetizing the valuable assets, put the entire Doheny book collection on sale in 1987.” The collection, though, went far beyond books to include manuscripts, artwork, prints, and decorative objects. Christie’s auction house would ultimately hold seven sales between October 1987 and May 1989 of Estelle Doheny’s collection.

As a collector, Estelle Doheny had a soft spot for Currier & Ives prints, and Christie’s described her collection of prints as the “the finest and most extensive” to come up for sale in decades. The News Letter later estimated that the sale grossed more than $385,000.

AHPCS member Jim Brust recalls it as “The most important Currier & Ives sale to take place in Southern California in my entire 45 years of collecting.” He shares his memories of the auction in the recent News Letter. Click here to read his account!