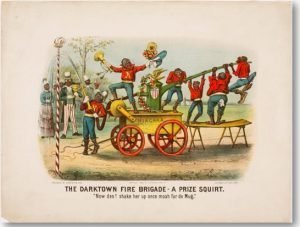 After the printmaking firm of Currier & Ives closed in 1907, its remaining lithograph stones were sold by the pound and most of their images ground away to make way for new designs—except for a set of Darktown Comics stones.

These stones were used to print lithographs in a long-running series of racist cartoons ridiculing African Americans. And the images were still too lucrative to just erase. From a company that produced roughly 8,000 different prints over more than seventy years, it was the Darktown Comics that were saved. The stones were purchased together, along with the reproduction rights, for reprinting.

In the late 19th century, racial and ethnic caricatures were extremely popular subjects for prints. The bestselling Darktown Comics were printed as small (8″ x 10-12″) or medium folios (about 10″-14″ by 14″-20″), but there was a strong American market for xenophobia and racism in all sizes.

The Library Company of Philadelphia recently acquired four 1882 trade cards–each approximately 4 x 3 inches–depicting (and demeaning) Irish immigrants to America. Over at the LCP blog, curator Sarah Weatherwax explores these images in “Mocking the ‘Other’: The Irish American Experience.” Click here to read more…