“Once in a lifetime!” is how one AHPCS member describes “Beyond Midnight,” the new Paul Revere exhibit showing at the New-York Historical Society from September 6, 2019, through January 12, 2020.

The statement isn’t hyperbole—exhibit curators (and AHPCS members) Lauren Hewes and Nan Wolverton of the American Antiquarian Society have been able to bring together artifacts unlikely to be displayed together again. The exhibit explores Paul Revere’s life, artistry, and impact, which extend far beyond his best-known contribution, that famous “Midnight Ride” warning American colonists of advancing British troops in April 1775.

For print lovers, the exhibit is especially notable for the many examples of Revere’s engraving work. Revere’s most famous engraving, The Bloody Massacre Perpetrated in King Street Boston on March 5th 1770, will appear along with four other contemporary versions—the first time all five 1770 printings of the Boston Massacre will be shown together. “Today the engraving is considered one of the most successful propaganda prints in American History,” explains Lauren Hewes.

Interestingly, the design is not Revere’s; he copied it from another Boston-area artist, Henry Pelham. In Paul Revere’s Engravings (1969), Clarence Brigham writes, “[Revere] never could have designed it. He was an engraver, not an artist…” It was common for engravers to copy the works of others in the 18th century—not that the practice pleased the original artists. In a surviving draft of a March 29, 1770, letter by Pelham, Pelham accuses Revere of “most dishonorable Actions,” writing, “When I heard that you was cutting a plate of the late Murder, I thought it impossible as I knew you were not capable of doing it unless you copied it from mine …” It is unknown if the letter was ever sent to Revere.

All five versions displayed in the exhibit at first glance look quite similar, but a closer study reveals variations. For instance, the moon in the Revere print opens to the left; Pelham’s moon opens to the right. 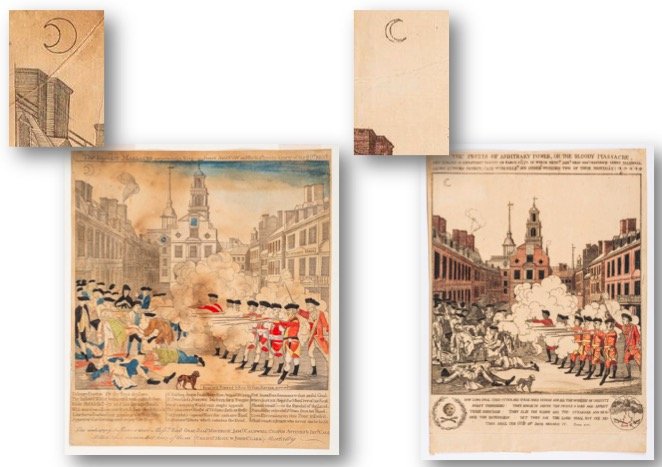 The exhibit offers an unrivaled assemblage of Revere’s work, covering the full span of his career. If New York City isn’t in your travel plans, the exhibit will also be traveling to Massachusetts and Arkansas: